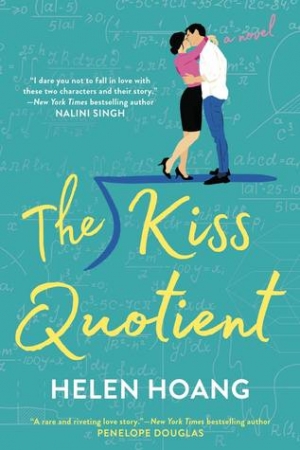 I have been keen to read The Kiss Quotient ever since I first read the blurb:

Stella Lane thinks math is the only thing that unites the universe. She comes up with algorithms to predict customer purchases–a job that has given her more money than she knows what to do with, and way less experience in the dating department than the average thirty-year-old.

It doesn’t help that Stella has Asperger’s and French kissing reminds her of a shark getting its teeth cleaned by pilot fish. Her conclusion: she needs lots of practice–with a professional. Which is why she hires escort Michael Phan. The Vietnamese and Swedish stunner can’t afford to turn down Stella’s offer, and agrees to help her check off all the boxes on her lesson plan–from foreplay to more-than-missionary position…

Before long, Stella not only learns to appreciate his kisses, but to crave all the other things he’s making her feel. Soon, their no-nonsense partnership starts making a strange kind of sense. And the pattern that emerges will convince Stella that love is the best kind of logic…

I admit it took me a couple of chapters to get into the story. However, once I settled in I quickly came to adore Stella and Michael both. For Stella, it was her earnestness which struck me the most. She desperately wanted to please (or at least, do no harm) and she repeatedly found herself in situations where she unintentionally hurt people’s feelings. I suspect everyone has had that kind of experience. I know I have, so I found her very relatable. Stella’s Asperger’s is something she struggles to share with people. She doesn’t want to be pitied or labelled. She particularly wants her relationship with Michael to be just her and him and not impacted by the label “autistic”. She figures if she can get him to like her before he finds out, then he might not be so put off.

It’s a different portrayal to that of Ruth in Talia Hibbert’s A Girl Like Her (a book I also loved). They serve to demonstrate that there is not one universal experience of autism, while at the same time portraying an authentic (and clearly fond) representation of autistic characters.

Stella works as an econometrician at an Amazon-like online shopping giant, devising algorithms to maximise sales. She loves the work and can easily engross herself in it long after everyone else goes home. In fact, she often goes to work on weekends because she likes it there. She understands numbers and data points in a way she struggles to understand people. One of Stella’s co-workers is a douchebag named Philip. Stella’s mother knows Philip’s mother. Stella’s mother is pretty desperate for Stella to get married and start a family and she thinks Philip would be a good potential son-in-law. (It’s fair to say that Stella’s mother doesn’t really know Philip.)  It is actually Philip who gives Stella the idea to hire Michael.

“So our star econometrician has ‘done it’ before. How many times? Three?”

No way was she going to tell him he’d guessed correctly. “None of your business, Philip.”

“I bet you just lie there and run linear recursions in your head while a man does his business. Am I right, Ms. Lane?”

Stella would totally do that if she could figure out how to input gigabytes of data into her brain, but she’d rather die than admit it.

“A word of advice from a man who’s been around the block a few times: Get some practice. When you’re good at it, you like it better, and when you like it better, men like you better.” He pushed away from the desk and headed for the door, his bag of condoms swinging jauntily at his side. “Enjoy your endless week.”

Obviously Philip is a jerk here but this was part of the book I struggled a little with. I didn’t quite understand why Philip would even have a conversation like that with Stella (or anyone). There was a little something lacking in the setup for me to get my head around it. That said, the above quote probably tells readers all they need to know about Philip. And conversely, the below quote tells readers an awful lot about Michael and the vast acres of difference between the two men.

“What do you mean by that?”

“It means so far you’re very good at it.”

Her fingers flexed on his arm, and she battled the urge to press herself against him like a stripper on a pole. It bewildered her. She was not at all stripperish, and unlike him, she actively disliked touching. But she craved connection so much she hurt with it. “So far we haven’t done anything yet.”

A spark danced in his eyes. “There’s definitely a talking part.”

Please, don’t let there be a talking part. There was no hope for her if it involved talking.

Part of Stella’s journey was being a bit more comfortable in her own skin. And Michael helped her with that because he accepted her wholeheartedly for who she was. And very often he found her ‘quirks’ a feature not a bug. Stella is not the butt of jokes. But there is humour in the story as she navigates her relationship with Michael. It was fond humour and that makes so much difference. Her approach to her “lessons” is logical and practical and so not what Michael is expecting. Stella has a “lesson plan” for each of their meetings. Lesson one:

Stella’s earnest approach to research made me laugh more than once.

She stroked her tongue over him before she bit him, sending a sudden fire burst of sensation directly to his cock.

“Where the hell did you learn that?”

On it’s face it might appear to be a fairly erotic novel, what with the leading man being an escort and all. But actually, it has about the standard level of heat of a contemporary romance novel these days – because after some interactions Stella decides that before she can become good at sex, she needs to become good at relationships and she hires Michael for this task as well. She comes to dislike the idea of Michael kissing her or having sex with her merely because he is paid to do so. And this dislike is more about her being worried that Michael’s consent is not being valued sufficiently than her own comfort. Consent is a particular issue in the story and I loved how much both Michael and Stella  specifically respected it.

She trailed her fingertips lightly over his lips. “Does that mean I can kiss you?”

“You don’t have to ask.” She was the only one who ever did. Maybe that was why he was so crazy about her.

“I have permission to kiss you whenever I want?” She watched his mouth like what he said was too good to be true.

Who says consent isn’t sexy? It’s one of the sexiest things ever.

Mutual respect and appreciation of each other is another theme in the book. Stella and Michael are from different economic classes but Stella does not see this as the barrier Michael initially does. Over time, he realises that Stella has no fears about him being a gold digger or a conman (he has reasons for his fears which are not based on toxic masculinity). Stella values Michael’s artistic talents and his devotion to his family very highly and she does not see them as unequal. It is Stella’s influence that convinces Michael that he is worthy of her just as much as the converse is true.

She brushed her hands over the black silk of his vest before she pushed it over his shoulders and set it on the nightstand carefully—because it was his work, and she respected that. Such a simple thing, but it made him want to wrap her up and never let her go.

Stella and Michael find common ground on a number of levels.

Her purse she placed absently on his couch as she inspected the DVDs lined up inside the TV console.

Leaning over for a closer look, she gave him a gratuitous view of her luscious ass. “You alphabetize them.”

He couldn’t help laughing. She never acted the way he expected.

When he is not escorting, Michael is a clothing designer and tailor. Stella is particularly sensitive to scratchy labels and open seams and Michael takes professional pride in French seams and the other finishes on his garments. Stella notices things about his clothing that others do not and this endears her to him as well.

I enjoyed Michael’s Vietnamese family (his Swedish father, while having a significant influence, is not an on-page character) very much and the culture represented and I liked the way Stella fit within the family, albeit after a fairly disastrous first meeting.

Michael is a bit more opaque in characterisation than Stella. He has a complicated history which is gradually revealed throughout the course of the book. I had some questions about him even after the book ended. If I think about it hard enough, I can come up with things which were underdeveloped or left somewhat up in the air – for instance, what was the significance of “Has she met Janie?” But ultimately, I loved Michael and Stella so much, separately and together, that those things were niggles in an otherwise wonderful book.

In some ways, there is a reverse Cinderella vibe to the book (as well as shades of reverse Pretty Woman) and it was lovely that in that respect Stella played the part of “Prince Charming”.  I have always loved romance novels in which people who consider themselves to be “odd ducks” or “misfits” find their perfect match; the person who sees them and appreciates them for who they are. The person for whom no change is necessary. And, apart from Stella and Michael themselves, it’s what I liked best about The Kiss Quotient.

“I like you better than calculus, and math is the only thing that unites the universe.”

→ Kaetrin
Previous article: DAILY DEALS: From the pages to the screen and some others in between
Next Post: DAILY DEALS: Undercover partners, lone wolves, eccentric investigators