I decided to take on Wendy the Super Librarian’s TBR Challenge this year, and February’s theme is series catch-up. Wendy is adamant that we don’t have to follow the theme if we don’t want to (or don’t have an appropriate book in our TBR), but I was more than happy to stick to it for this month, because Book 4 of the Henry Rios series has been calling to me. This series, about a Chicano lawyer in 1980s/1990s California, is one of two great mystery series with gay protagonists which set a standard in the subgenre (no, I’m not forgetting Adrien English, but he came a bit later and Josh Lanyon is the first to point to these trailblazers). I’ve written about the other, Joseph Hansen’s Brandstetter series, here at Dear Author before. And I wrote a sort-of review of the first Henry Rios book, The Little Death, at my personal blog a while ago. 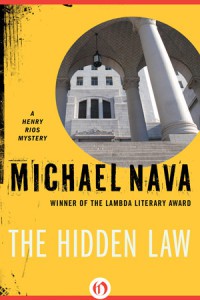 The Brandstetter and Rios books share similarities: both characters are intelligent, decent, caring men and both series are set mostly in late 20th-century southern California. But while Dave is taciturn and reveals his inner self obliquely and with bits and pieces of information, Henry is much more self-reflective on page, and each installment grapples with some aspect of his past and present psychological issues. Earlier books focused on his homosexuality, his ethnic and class background, and his family. In this book we learn much more about his fraught relationship with his father.

So far, every novel has had three themes driving the story: the mystery and Rios’s journey to solving it, his personal journey (which is usually shaped by aspects of the specific crime), and a romantic subplot. In the past two novels Rios has been involved with Josh, who is HIV positive and has been since before they met. The relationship has been rocky, and it comes to a head in this installment. I’m not a huge fan of Josh, although Nava certainly portrays a realistic relationship, especially for the times, and I think the tension between the two of them, which is caused primarily by the fact that Josh considers himself to be under a death sentence while Henry is HIV-negative, is well depicted and rooted in the time in which it is set. I’ve thought since Book 2 that Henry could do a lot better, but by the last chapter I had a much higher opinion of him.

The mystery is an interesting one, and as I’ve found to be the case in the previous novels, the original crime and the search for the killer place the reader in a rich, dense culture. The dead man is a Chicano politician and the suspects range from LA gang members to a fellow patient of a halfway house where he spent time in rehab for alcohol abuse. We see characters from earlier books and Nava creates a familiar, authentic context from a part of California that is rarely portrayed in the romance or mystery genres. For readers and authors who want to see more POC settings and characters, this is how you do it. Here’s how Nava writes a scene in which both characters are speaking Spanish, and in an endearingly realistic touch, Rios is slightly embarrased by his lack of fluency before his client’s grandmother:

I thanked her for the tea and cookies, complimented her house, and asked her about the sailor. He was her husband, she said, who had been killed at Iwo Jima. I expressed my regret at her loss, and she received this with the equanimity of someone who had been receiving such condolences for nearly fifty years. I drank some tea, ate half a cookie, and then said I wanted to ask her some questions about Michael.

“Pero, si,” she replied, and added that they had come for him almost every day. He would leave with them for a few hours, and then return for dinner. Once they had stayed to eat, and they had both been well-mannered and respectful. “Muy amables.”

A Californian will instantly recognize the people, the locations, and just the feel of the place. But we’re not dumped into some “barrio” story; the minority characters (black and Latino/Latina) range from politicians to homeless people to wayward children of rich businessmen to lawyers, the way they do in real Los Angeles and in California more generally. As I have throughout this series, I enjoyed the twists and turns the mystery took as it was unraveled. I guessed correctly who the killer was a little more than halfway through the book, but I didn’t see all the nuances coming, and they greatly enriched the story beyond the simple crime it seemed at first to be.

The part of the story that dealt with Henry’s past, specifically his relationship with his father, didn’t work quite as well for me in the first half of the book, but the second half brought the storylines together powerfully. As in the novel preceding this one, Howtown, the way the past and the present join up and help Henry move forward is one of the great strengths of the world Nava has created. Each installment has a slightly different focus, in and this one the portrayal of a troubled, abusive father and the toll on his son rings true and is rooted in a specific social context:

My father had been a man who, outwardly, was a respectful, responsible member of our small community, a collection of neighborhoods called Paradise Slough, the Mexican district of a town in northern California, Los Robles. It was not too different in spirit from Boyle Heights, the neighborhood I had just come from, a Spanish-speaking village in an Anglo city. Disdained by the majority, its people were tribal in their outlook and mores. Its cornerstone was the family, and in the family the father ruled, irrevocably and without question. Outside, in the larger world where they labored under the contemptuous eye of Anglo bosses, the fathers were social and political ciphers. No wonder, then, that in the families they tolerated no dissent from their wives and children. And they drank. They drank to wash down the slights they endured by day and to enlarge small lives which became heroic in alcohol-glazed rumination, but at their cores the fathers knew the full measure of their unimportance and, so, finally, they drank to quiet the rage.

But the rage would not be completely calmed. How could it? The church told them their reward would be in the next life, but this is small consolation for the back-breaking labors of the present, the years of enforced humility. When the rage exploded, they struck out at the only ones over whom they had any power: wives, sons, daughters, particularly the sons in whom they saw their own lost youths.

The writing is, as usual, excellent, although once in a while I felt as if I were being told too much. There is a lot of internal monologue in this book (it’s a characteristic of the series), and sometimes it didn’t quite work. But Nava sets such a high bar with these books that we’re talking about good v. very good v. very, very good. In each of the four stories I’ve read (there are a total of seven in the series), when I come across something that feels slightly off, I spend a fair amount of time wondering if its the book or if it’s me. And if that isn’t the hallmark of quality, I don’t know what is.  Grade: A-