REVIEW: Geek with the Cat Tattoo by Theresa Weir

Shy music geek Emerson Foshay breaks into a cold sweat and is rendered speechless whenever Lola Brown, the girl of his dreams, steps into his guitar shop, but once a stray cat named Sam follows him home everything changes and Emerson becomes the coolest guy in town.

Sam the cat, Max’s (Girl With the Cat Tattoo) brother

Ever since Sunita – and a lot of other people – and I fell in love with Max the Cat, we’ve been waiting for the follow stories of his lost brother and sister. During Max’s run through the DABWAHA competition, I silently cheered the novella on and sighed about the fact that we probably wouldn’t get the next one until 2014. Then! imagine my happy face when a friend emailed me that “Geek with the Cat Tattoo” was coming out sooner, now in fact. My whoop made my own kitties give me the side-eyed, “back away from mom slowly because she’s obviously off her rocker” look. Yes, I talk to my cats and firmly believe they understand every word. I must ask, though, why Sam isn’t on this cover? 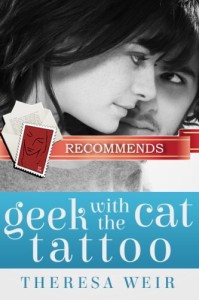 Poor Sam hasn’t had an easy time of it. On his third owner as the story opens, Sam knows the gig is up and that he’s about to be homeless again. But better tossed out the front door then driven out to the country and dumped with a bunch of feral, wild cats. Things look up – just slightly – when he comes across a drunken young man. It’s then that Sam decides that instead of letting a new owner claim him, he’s going to claim a new owner. Sam might deny his nurturing ways but something in the man brings them out and a tentative meow along with a gentle nudge causes the man to pick up Sam and take him home.

“Hello,” my new friend says, with wonder and surprise in his voice. He reeks of beer. I mean reeks like it’s coming out of his skin. But I can feel the kindness emanating from him too. This man/boy has a good heart. A smart cat knows these things.

He reaches for me. My initial reaction is to dodge his hand, but I force myself to accept his touch because he needs to feel the comfort I can bring him. I might be an opportunist interested in food and a warm bed, but I can also comfort a human. A lot of people might not believe that about cats, but it’s true. We aren’t just selfish jerks interested in nothing but our own well-being. If that’s how I rolled I would have been happy with First Owner and Third Owner.

Emerson might live in a semi-dump but Sam feels he’s got potential. Their first day together also shows Sam that Emerson needs some matchmaking help when a lovely young woman arrives in the instrument repair shop where Emerson works. As usual when the woman he loves appears, Emerson falls to pieces and it’s only with Sam working from the shadows with his mind suggestions that smooths things along.

The two begin a tentative relationship which is more friendship at first since Lola still isn’t sure about Emerson, a man she thought hated her because of what she thought was his rudeness at the store. It isn’t that he’s rude – just shy and painfully socially awkward. Given to introversion myself, I could immediately identify with Emerson. Although I can’t recall ever just walking away from anyone, going into new social environments can be a challenge for me too.

But somehow with Sam at his side, Emerson becomes the more smooth talking, social person he’s always longed to be. Emerson can’t explain it and certainly doesn’t want to tell anyone for fear they’d think he’s off his meds but Sam seems to calm Emerson and give him social courage. Sam knows that Emerson can’t rely totally on him and doesn’t want to risk losing who he thinks might be his forever owner by mind-messing with Emerson too much so some awkward moments lead to setbacks in the romance a time or two.

Lola has her own issues with confidence in her music and fear of getting involved with another loser boyfriend after her last one grifted her so there are times when she is understandably less than thrilled with the way Emerson acts. However their first time together all night is beautifully yet succinctly described when Lola tells her sister Melody of the way Emerson took exquisite care of her and cried.

“He cried.”
That got Melody’s attention. “What?”
“He cried.”
“Maybe he was just…I dunno, exhaling and inhaling in a trembly kind of way. Guys do that during orgasm.”
“I don’t think that’s what was going on.”
Silence from the other end.
“Mel?” Without waiting for a response, Lola continued: “I think that’s when it happened. I think that’s when my heart started to hurt. I think that’s when I began to wonder…if I love him.”
“You hardly know him.”
Lola nodded in agreement even though her sister couldn’t see her. And the nod was more of an affirmation of her identical response—as in how could this happen with someone she hardly knew. “I just think…. Well….” She touched a finger to her lip and dropped her voice even more, and now she felt like crying. “I just think he’s very special.”

I think he’s special too as he’s making something just for Lola. Something to help her realize how wonderful a violinist she is and given what his apprenticeship mentor tells Emerson about the PITA it is to make a violin … yeah, he’s very special. The sweet courtship he works out as a way to “speak” to Lola without getting tongue tied is wonderful too.

Just when everything is looking up, disaster strikes. Now comes your famous leavening of the sweet with the angst. Something Awful is done by Evil Third Owner and Sam ends up in danger. I was along for the heart stopping wild ride Lola and Emerson take to save him and I wept when they thought All Was Lost. If readers are pet lovers, they will too. The reunion scene had me crying even more.

The cat jumped from the cage to his shoulder.

“It’s Sam!” Emerson said with joy in his voice as he reached up to pet him.
Lola put a trembling hand to her mouth and let out a choked sob, then she began to laugh.

Emerson coaxed Sam off his shoulder so he could hold him to his chest and pet him. The cat meowed and purred. With Sam between them, Emerson and Lola put their foreheads together.

Okay at this point I thought everything was done, everything was fine. But you pulled a swift one on us and ratcheted up some more angst. “WHAT?!” I thought. The novella is almost over. How will she fix this? Ah, there was a way and it worked to show Lola how much she means to Emerson and that he’s worth a little fixing-uping from time to time.

I finished the story with a contented, happy sigh. Emerson has the woman he’s longed for from afar, Lola has found a special man who cherishes her and gives her confidence and Sam, well he’s found Fourth Owner – aka forever owner. Oh and his brother Max too in a very catlike way.

Although the cool customer is my long-lost brother, this kind of thing has to be taken slow, even with family.

Max saunters toward me, jumps on the couch in one graceful motion that I can only envy, and plops down on the opposite end and does that half-closed eyes thing that makes a cat look like he’s smiling.

A- (because no cute Sam cover)

P.S. – I had already intended to make a donation to my local no-kill animal shelter as a Christmas gift to another pet loving relative but after reading this novella, it’s gonna be bigger.