REVIEW: The Flatshare by Beth O’Leary

I read your debut contemporary two weeks ago, a book I think many DA readers would like. It’s an epistolary romance called The Flatshare. 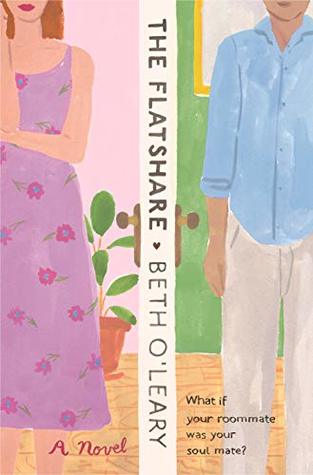 Tiffy Moore needs to move out of her cheating ex-boyfriend’s apartment, but can’t afford the rent in London. So when she stumbles on an ad seeking a flatmate for a one-bedroom apartment, at the very affordable rent of only 350 pounds, she’s encouraged. But there’s a catch: the flat has only one bedroom. Tiffy will have the apartment from evening to morning, while L. Twomey, the person advertising, works a night job. Twomey will have the flat during the day, when Tiffy is at work. Tiffy and her flatmate will have to share a bed without ever sleeping in it at the same time.

L. Twomey turns out to be Leon Twomey, a palliative care nurse who has taken the night shifts for the extra pay. Leon needs the money to fund his effort to overturn his younger brother Richie’s unjust conviction of armed robbery. Leon’s girlfriend, Kay, is unhappy about the flats-sharing arrangement but agrees that she can’t continue to loan Leon money to pay the lawyer who’s working on his brother’s appeal. Still, she insists on vetting Tiffy. When she does, she’s relieved to assess her as no threat. But to be on the safe side, Kay insists that Leon and Tiffy never meet.

But despite adhering to this rule, Leon and Tiffy become aware of each other through their shared use of the same apartment. At first Leon is annoyed at the number of clothes Tiffy has brought with her and Tiffy decides to do something about Leon’s boring decor. But they quickly become aware of other things, too. Tiffy notices that Leon is distracted when he forgets to put his coffee mug away. When Tiffy bakes a lot and leaves him baked goods to eat, Leon realizes that she’s down about something (her ex, Justin, was emotionally abusive and though it takes Tiffy much of the book to realize the extent of it, she is vulnerable long before that and feels a bit fragile).

The small notes they leave each other slowly become more than just informative. They begin by sharing only pertinent information, then share food, and later more important things. When Tiffy picks up the phone and it turns out to be Richie calling, their letters become more personal.

The novel is leavened by humor and by a charming subplot that involves Leon’s efforts to track down the World-War-II-era lover of one of his patients. We also see Tiffy’s work at a publishing house that puts out DIY books, the jokes she shares with Rachel, her a co-worker and friend, and the way she gets roped into modeling crochet sweaters for an author of books on crocheting.

Both protagonists are committed to their jobs. I appreciated that we actually got to see them perform those roles in their work environments and to meet a few of the people they work with. Tiffy and Leon feel like real people; there’s no billionaire, pack alpha or duke in this book. It doesn’t need one. And in fact, the only wealthy character is Tiffy’s abusive ex.

We encounter Tiffy’s supportive-through-thick-and-thin friends, Mo and Gerty, as well, and they too add rays of light. Even Richie, though trapped in prison, knows how to crack a joke and flirt.

(One thing did surprise me: there was no mention of Tiffy’s family until the epilogue, when there’s a reference to something her dad said. I was startled to learn that Tiffy had a living father, and apparently a supportive one at that. Where were you all along? was my thought in response to that.)

There are still obstacles to be overcome. Kay, Leon’s controlling girlfriend hovers in the background for a while. And Tiffany’s bad-news ex, Justin, refuses to stay out of the picture for even longer.

The conflicts are mostly external. Tiffy and Leon are gentle people, vulnerable and good-hearted.

Tiffy is quirky and accepting; for example, she’s tall but open to dating someone shorter (Leon is tall too, though) and nice to the crochet lady. And she is gabby and social and warm.

Leon is a quieter, more introverted person and likes to make decisions slowly, in a thoughtful manner. He doesn’t have Tiffy’s impulsivity or her social nature, but he’s terrific with his patients and later, supportive and understanding of Tiffy.

The book is narrated in first person present tense and the viewpoint alternates between Leon and Tiffy by chapter. Leon’s narration style is different from Tiffy’s and takes a little getting used to. He thinks in pared-down lists and when we are in his POV, the dialogue shifts to something like playwriting format: character name, colon, their dialogue, next character name, colon, their dialogue. It took a couple of short chapters to get comfortable with.

The tone of the novel starts out frothy and light but the storyline becomes more substantial as the books continues. The concept of leaving one another notes without meeting was a wonderful vehicle for a great meet-cute. Better yet, it allowed the characters to get to know each other as people as well as have sexytimes.

Leon has light brown skin and it’s clear that Richie’s false conviction had to do with skin color, but we’re never given their specific background. I was fine with this but maybe other readers won’t be? Hard to say.

Because I’m not that familiar with contemporary British vernacular and don’t read many books set in contemporary England, at first I felt a little at a remove from the story and characters, but they were so endearing that I got over it relatively quickly.

It’s more than a little convenient that Tiffy’s friends Mo and Gerty are a counselor and a criminal justice lawyer. I was willing to overlook this coincidence because they were so great to Leon and Tiffy, and interesting in their own right. Mo was patient while Gerty was anything but.

There’s only one love scene and it’s fade to black, but the book still has a fair amount of romantic tension and some sexual tension as well. The build-up to the romance is slow but all the more rewarding for the wait. Tiffy and Leon complement each other well; it’s easy to envision a happy future for them, even if the epilogue was a touch too sweet.

The Flatshare is page-turning. Chapters are short and something is always happening, but it feels organic, not forced. Prose-wise, the metaphors are witty and startling, but the writing isn’t overly ornate. The foreshadowing wasn’t too heavy. Two or three times I guessed what would happen, but not much ahead of time.

There’s a subtlety to the characterization and a light touch to the novel but there’s also some emotional heft. Things get more serious as the book unfolds, but all of it is handled delicately and thoughtfully.

This novel is a great example of the friends-to-lovers trope. I stayed up until two in the morning while reading because the book was sweet, absorbing and enjoyable. A-.