I’ve been eagerly awaiting the U.S. release of this book for months. It incorporates characters and settings from two of your previous books, The Winter Sea and The Shadowy Horses. Since I reviewed and recommended the former and Jayne the latter, we thought it would be fun to do a joint review for The Firebird. 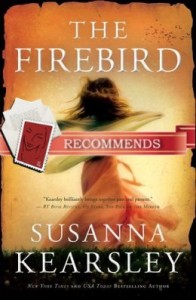 The novel opens in contemporary London, where Nicola Marter works in an art and antiques gallery. Nicola has psychometry, a type of extra-sensory perception that gives her insights into people and events when she touches specific objects. She touches a scarf belonging to a customer and is drawn into the owner’s life and history, which in turn causes her to reconnect with an old friend and not-quite-lover, Rob, who is gifted with even stronger psychic abilities. Together they set off to find proof of the provenance of the customer’s Russian artifact, a carved firebird, which was given to her ancestor, Anna, by Empress Catherine of Russia. Their journey takes them to the Scottish Highlands, Belgium and eventually to Russia, and along the way they and we learn the story of Anna, who we first met in The Winter Sea, as well as that of her parents and the Jacobite community in early 18th-century Russia. As Rob (from the Shadowy Horses) and Nicola uncover Anna’s and the firebird’s secrets, they grow closer together, but their differing attitudes toward their psychic skills and how to manage them threaten to keep them apart once more.

Jayne: It took a while to get into. The modern stuff caught and held my attention much more easily. I thought the historical parts started out fascinating and I was riveted while Anna was still in Scotland, then Ypres and then her escape in Calais but once in Russia, things slowed down. I still found it interesting due to what I was learning – about Jacobites in Russia – and the wealth of period detail, but I did find myself wondering where it was all leading and why it mattered to the story. It did cause me to dig more into Russian history and I spent an enjoyable hour or two brushing up on the Who’s Who of 18th century Russia, Denmark, Sweden and Great Britain. Still it took until the end of the novel for it to all tie together and make sense why it was all included and all these people were in the story.

Sunita: I had the same reaction. I didn’t read anything about the book before I started, so I expected more of it to be set in Scotland and less in Russia. I enjoyed the Russian setting, but I agree with you that it was paced in a leisurely way. Every once in a while someone would be introduced and I wasn’t sure why, but then the plot would reveal their importance. I was impressed at the way Kearsley integrated the real and the fictional characters; until I read the author’s note I was never sure which characters were real or not (apart from the obvious ones).

Jayne: If you could have psychometry would you want it and how public would you go with it? Nicola is more hesitant to let outsiders know of her abilities partly due to what her Russian grandfather endured at the hands of the Soviets before he escaped to the West and partly due to not wanting to be thought a freak or put her job at risk. Which turns out to be the major conflict she and Rob have. He can’t imagine not being open and honest about what he can do as he views it as a major part of who he is. I have to say that I doubt I’d want anyone to know what I could do just because of the risk and fate of Nicola’s grandfather. If any Powers that Be cottoned on to Rob’s abilities I find it hard to believe they wouldn’t try and take advantage of them.

Sunita: I though that aspect wrapped up a little too quickly and neatly at the end. After a lifetime of hiding her gift, Nicola made the change pretty abruptly, and there were almost no consequences. I understand that the choice she faced about Rob forced the issue, but I would have liked to see more of the aftermath, especially with her grandfather.

The structure of the present and past storylines was very much like The Winter Sea, a book I adored. Since in this book Nicola and Rob knew each other beforehand, their friendship and attraction doesn’t have to be set up in the same way, and I liked that we were immersed from the beginning. It’s also a good example of how you can get a lot of information from a single POV. We only see Rob through Nicola’s perspective, but I didn’t feel that I was shortchanged in understanding his thoughts and feelings.

Jayne: Yep, totally agree with you on all of this. I was struck by Nicola’s assessment of Anna’s maturity at age 17 but also by the decision Anna makes at age 9 when faced with possible capture by English agents who might have used her to influence her family and sway them from the Jacobite cause. How many modern girls at 9 would be willing to deny anything and everyone they know in order to keep those people safe? Anna shows her fighter’s ancestry in being willing to head into exile and keep her secrets close all those years.

Sunita: I thought Anna at 9 was a terrific character. I don’t read a lot of books with children as the protagonists, so I don’t have many points of comparison, but she seemed smart without being overly precocious. She had great instincts, but she also made mistakes typical of a child of her age.

I appreciated as well that even though she had to move from one setting to another several times in order to ensure her safety, the adults took her into their homes and were loving and caring to her. This was not a child in jeopardy story, but a story about a child (and then a young woman) living in a dangerous time.

Jayne: I was delighted that not all the Scotsmen in the story at Highlanders. Let’s hear it for the Lowlanders! And that Rob takes Nicola to task about James VII’s correct numbering. He also provides her with some of the reasons why people were willing to fight to see James VIII be King – they fought for honor and the justice of seeing a King they felt was born to his position regain it.

Sunita: Yes, it’s the anti-Scottish Historical Romance! There’s a great exchange in the story, when Nicola and Rob are eating ice cream in St. Petersburg:

Rob turned his collar up against the wind and took a bite of ice cream. “You might want to get a warmer sort of ritual. With cocoa, like.”

“I thought you Scots were hardy.”

“Hardy, hell. I’m from the Borders. St. Petersburg would be at the same latitude as Thurso, on the northern tip of Scotland. It’s all Hielanmen up there, they like the cold.”

Jayne: LOL, I laughed at that line too. Rob and Nicola not only share a physical connection and attraction but a mental one as well. Imagine their kisses!

Sunita: Kearsley never has explicit sex scenes, but the emotional intensity comes through. When Nicola and Rob finally get together, it’s very satisfying. And I loved that she shows you how their emotions overwhelm their words and how their thoughts are intensifying and reflecting their physical desires.

Jayne: I love the way that the early Firebird fairy tales Nicola tells Rob end up foreshadowing what happens with the two of them. What they sought was not what they ended up with but everyone will be happy and will have gained something they hadn’t initially looked for.

Sunita: Oh, good catch! I think that readers who enjoy the intermingling of fairy tales and legends in their fiction will really like this part.

Jayne: I was left with two happy endings both of which I adored. But at times it was slow going to get through some of the parts in historical Russia. Grade: B

Sunita: I agree. Like the Guy Gavriel Kay book I reviewed recently, this book required attention and concentration. It’s not at all a difficult read, but there’s a lot going on and it’s immersive. But it really pays off for the reader. If you’ve read The Winter Sea and/or The Shadowy Horses, you’ll really enjoy returning to the characters and locations. But if you haven’t, you’ll still have no trouble following what’s going on here. Grade: A-

We have several region specific giveaways for this book given that Susanna Kearsley is published by three different publishers around the world. Please pay attention to the giveaway’s geo restrictions: 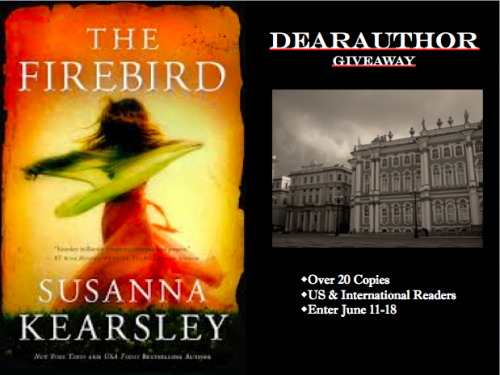 The giveaways are provided by Sourcebooks, Allison & Busby, Simon & Schuster Canada, and Audible.