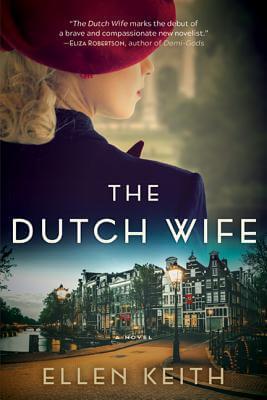 We often ask ourselves, what would I do if I lived in a period of horror like the Holocaust? Would I save people? Would I be like Captain America or Oskar Schindler? Am I a Good Person?

Most of like us to think this. It comforts us, somehow. We like to think that we would become the rebels, the resistance, the Good People.

But if one is given to a grimmer train of thought, the alternative is much less comforting. Perhaps we aren’t necessarily Good People. Perhaps there is a latent evil buried within our benign, well-meaning selves—something that might catch flame if the circumstances were right. And if fanned high enough it might destroy ourselves, and others—and maybe even the world.

The Dutch Wife, a smart, ambitious literary historical novel, explores this question thoroughly. What are we responsible for? What would we do to survive? How can we hold onto our humanity in an era of crisis and horror—and more importantly, how can we fight it? How can we hold on to the good—the truly good?

Like many other historical novels nowadays, The Dutch Wife has two timelines. The first is Buchenwald, in the 1940s: Marjike, a married Dutch political activist, is sent to Ravensbrück, but volunteers to go Buchenwald to become a whore at the prisoner’s brothel in a desperate attempt to reunite with her husband Theo. Once she’s there, SS officer Karl Müller becomes obsessed with her and does his best to prevent her reuniting with Theo.

The second timeline is set during late ‘70s Argentina, during the Dirty War, or the Guerra Secia. Luciano, a gay student dissident, is sent to a secret facility, where he is tortured by the vicious right-wing Juntas and their thugs. Yet even under the most terrifying circumstances, he manages to connect with another prisoner and learn to fight back– and eventually we learn the connection between the two timelines.

This book is released by Park Row, owned by Harlequin. There was some concern upon the release of the blurb, which implies that Müller is the romantic interest, the “hero.” On Amazon.com, the book is even classified as a historical romance. There was discussion on Twitter from people afraid that it might be similar to For Such a Time, a truly awful retelling of Esther featuring a Nazi as the love interest/hero.

However, I would like to assure readers that nothing is further from the truth.

Karl Müller is the lynchpin of the story, but he is not the hero. Far from it. He is the villain. But the novel doesn’t just focus on the bad guy’s story. Ms. Keith, you manage the tricky job of foregrounding both the perpetrators and victims/survivors.

The Dutch Wife is a brutal, searing depiction of life under fascism, and how different people cope, survive and fight against it.

It is also a fascinating exploration of toxic/ fragile masculinity, and its rippling effects. Karl is really invested in thinking of himself as a Good Person. He’s a sensitive man, an aspiring naturalist, a lover of nature, opera and music… but the more time we spend in his head, the more we realize his true character, as well as his breathtaking lack of awareness. He’s petty, apathetic, controlling, selfish, and with a vicious temper, especially against Jews and gay men, who he views as weak, degenerate, and a danger to the Aryan race. He also tries repeatedly to destroy Theo. However, he won’t actually do it in person, in the most direct way possible, because he doesn’t want to think of himself a brute; not like those other SS men, who smoke and curse and rape, and who had “no interest” in “anything that didn’t contain a trigger or a fuse.” Karl is sure he is better than them.

But Karl is a coward. He is always running and hiding from relationships—from responsibility– from consequences. I don’t want to get too deeply into spoiler territory here, but he gets his karmic reward.

Marijke, the most prominent of the two protagonists, is inspiring. Along with her friend Sophia, a communist, they face the world with caustic wit and grim determination, and find fragments of joy in whatever they can, whether it’s through bawdy jokes, nostalgic anecdotes about pre-war days, or an ad-hoc birthday party.

She’s imaginative, given to flights of fancy, but blunt, tough, pragmatic, clever, and devious enough to suggest, when the brothel inmates are forced to knit socks for the German army, to tighten them up in the heels as to make “part of the Wehrmacht” limp “its way across Russia.”

But she’s also vulnerable. Her beloved husband Theo, a gentle, bespectacled professor, means everything to her. His existence, his memory, represents something vital to her—like a mantra—a heartbeat— he helps her wake up in the morning, carry on in the face of the unbearable.

I touched my empty ring finger, aching to know if Theo was still alive, where he was. Questions and worries churned my thoughts: whether he’d heard the guns of the approaching Allies, if he understood the end was upon us. Had he managed to hold on, and could he hold on that little bit longer? My fingers, my toes, my skin, my eyes, my lips, my ears—every part of me pined for him: wishing to hear his quiet laugh, to return to Sundays drinking tea along the canals together, to see his face beside mine at sunrise every morning. To give him a child he would love.
(pg. 287, The Dutch Wife)

Karl knows this, and is deeply jealous. He tries to supplant her affections, doing his best to impress her with tender gestures, all the while seeking in secret to destroy the life and hopes of her husband. Words cannot describe what a truly vile man Karl is. You describe him so convincingly, with his insecurities and daddy issues—and yet how cowardly he is—and yet deeply impressed with himself. After I’m in his head I want to scrub myself in hot water.

However, Marijke is such a wonderful character that I was rooting for her the entire way. I wanted her to get away from Karl—to realize that she had Stockholm Syndrome, despite his good looks with his “dirty blond hair” and “gas-blue eyes,” expensive gifts like 18th century violins looted from wealthy Jewish heiresses, and grand but ultimately empty gestures, like romantic walks in the wood (until he’s confronted by a fellow officer, and he claims that Marijke is just some escaping whore that he’s bringing back). Sophia does her best to talk sense into her, and Marijke struggles with her ambivalent feelings about her jailer/captor/lover and her own struggle to survive and find Theo. It’s shown, not told. It’s marvelously nuanced, and with so much attention to detail. I also loved how this was all depicted realistically, and appropriately for the era. There’s no pop psychology or “heart to hearts.” Yet she endures.

And she also triumphs. In the end, at last, she leaves Karl behind her, even though he tries to destroy Theo numerous times and make her completely dependent on him. But to no avail. She has left Buchenwald and him.

The secondary protagonist, Luciano, is also deeply moving. While not as much of a flawed yet loveable spitfire as Marijke, he’s a great character too. I wanted to give him a hug so many times.

I could relate to him, probably more so than Marijke. While much more inward-looking than Marijke, he was such a contemporary student I could imagine him in one of my lit classes in undergrad. He’s a baby-faced poet in love with Borges and Neruda, insecure, so deep in the closet that he’s filled with self-loathing, but observant and sensitive to the point it could be argued he has psychic tendencies.

The Dirty War isn’t well known in the US, but it was terrifying. Back when I was younger, I’d only heard about it because of the Sting song, “They Dance Alone,” but once I’d read this book I looked into a bit more. You depict in all its horror. Young people, just for attending a protest or keeping company with “suspect” people, were abducted in the middle of the night and then carted off to secret facilities where they electrocuted, waterboarded or more; babies, ripped from their parents, were adopted out to the party faithful while the parents were “transferred” into oblivion… and anyone who was an artist or an intellectual or who even liked punk might be detained or beaten—or they might disappear altogether. These were los desaparecidos. And Luciano becomes one as well.

During this part of the book, Luciano’s reflections on his relationship with his cold, bigoted father provides a running thread—as his struggle to retain his sanity, and connections with other human beings—and his own humanity in the face of torture and rape. He’s convinced he’s a coward, but he continues, in his small way, to defy the Juntas and fight terror and fascism, unlike men like Karl.

The characterizations are great. There’s so much psychological realism. You really feel exactly what the characters are going through. It’s something of The Handmaid’s Tale meets Kiss of the Spider Woman meets Elie Wiesel.

My only issue is that everything wraps up quickly. A bit too quickly. I wanted to see more from these characters! I wanted to see the ending fleshed out a bit more. But that’s my only complaint.

As you can imagine, this is a grueling, harrowing book. I understand that it’s not for everyone because it is so triggering on many levels, and because it goes to such dark places.

But it’s also an extremely important one with its message of hope—not giving in to despair—and fighting back against the darkness. It’s a vital message, now more than ever.