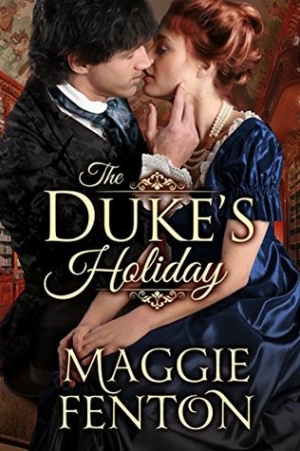 Your novel, The Duke’s Holiday, leads us into the delightful story of the Duke of Montford, one of (if not) the most powerful man in the kingdom, and Astrid Honeywell, his sworn nemesis. Well…not quite his sworn nemesis. But their families have been feuding for so long that they might as well be lifelong enemies, despite having never met.

Their story begins with the Duke realizing that something is very amiss at Rylestone Hall, one of his many properties spread throughout England. Being afflicted with a phobia of travel, he sends his man of business to the property to handle the situation. As two weeks pass and communication ceases, Montford realizes that he will have to attend to this business himself.

What follows is a thoroughly hilarious tale of strong personalities, devious misdirection, classic misunderstandings, wrong turns, and helpful friends and family, with a dash of villainous machinations and pompous, distant relatives thrown in. Astrid spends the novel fighting against Montford to keep her extensive, all-female family in Rylestone Hall, with each attempt more ridiculous than the last. For all his flaws, Montford is not a callous man and realizes relatively quickly that he cannot just throw them out of the Hall. What takes longer to figure out is exactly what he will do with them. Throw in a kidnapping and Gretna Green marriage plot that must be unraveled, and you have the basics down.

As they say, though, the devil is in the details, and you delivered, Ms. Fenton. Oh, you delivered. There was the occasional jarring note, particularly with regards to some of the language used, but I put that down to this being your first historical romance novel. The occasional trope made it in (Gretna Green kidnapping plots are so cliché), but they were obviously deliberate inclusions and as such were simply absorbed into the story and made it feel more like a historical romance novel.

The bigger point is that all of the twists and turns could have easily diverged into the ridiculous, but no. They made sense, particularly given the personalities of the characters. Montford is a powerful man, accustomed to getting his way. His parents have been dead since he was a young child, so he’s been treated like a duke of the realm for as long as he can remember because he actually has been a duke for as long as he can remember. He’s active in the governing of the country, he commands the attention of the Prince himself, and he is almost never told no. He is incredibly meticulous about everything in his life, from the exact placement of the boxes on his desk to the precise ordering of books on shelves. There is nothing in him that enjoys or even tolerates disorder.

Enter Astrid, who seems to be the perfect antithesis to Montford’s impeccably ordered life. Montford shows up at Rylestone and is immediately thrown into the fire with Petunia, a pig who quickly takes a disliking to him and lands Montford on his derriere in the mud. Montford’s circumstances do not improve as the story progresses and he realizes that Astrid, a self-admitted bluestocking, is the one who has been running Honeywell Brewery and Rylestone Hall for at least a year. She hasn’t just been running it; she’s been running it well. Astrid gives her youngest sisters permission to be as awful as they please, and they do carry on in fine style, what with their shenanigans and Greek togas and swords. Astrid herself is seemingly an agent of chaos, from her mismatched eyes and unruly red hair to her intelligence and wit and fierce desire to keep her family safe and together.

Truly, Astrid and Montford should not work together. They really shouldn’t. You’d think they’d mix as well as oil and water, and you’d be right in the beginning. However, the chemistry between them can’t be denied, and each realizes that they cannot live without the other. Watching their story unfold and seeing their edges scrape against the other’s was wonderful.

I laughed. I laughed so hard my daughter asked to confirm that I was actually laughing at the book I was reading, a normal occurrence in our household. My breath caught in my throat as pieces of the secondary plot with the villain came together and I worried about Astrid and Montford and whether they would make it out of their predicament alive and whole. The scenes of physical seduction made me grin from ear to ear as I waited impatiently for them to get a move on. I lifted a triumphant fist as he tossed her over his shoulders in front of the entire countryside and strode away with her. I cared about the characters, both the major and the minor. Roddy and Flora? Adorable. The twins? Darling hellions of the first degree. Montford’s best friends? Rapscallions, and I can’t wait to see their stories unfold in future stories. A-

Currently available only at Amazon