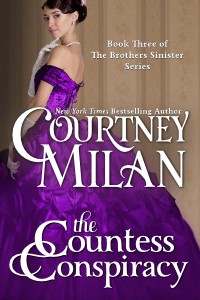 It’s not often I find a book, of any genre, that makes me want to cheer – let alone a book in the wonderful, yet somewhat repetitive Regency / Regency-feel romance field.  The character choices and plots tend to be a little limited.  Rakish bad boy meets wallflower / slightly off-beat heroine, throw in one or both of them fleeing from marriage or commitment, add in a dash of interfering families and /or wacky hijinks, and you have a recipe for the normal Regency happily ever after.  I about cried with happiness when I realized that you’d taken that formula, tossed it in the wastebasket, and merrily went on your own way, doing whatever you pleased.  And it worked.  I never thought I’d say this – but it really, honestly, worked.

In this, the third book of the Brothers Sinister series, we find Violet Waterfield, widow and Countess of Cambury daughter of scandal, living in Victorian England (not to be confused with Regency England).  Between a father who committed the unpardonable sin of taking his own life, and a mother who scandalized everyone by penning a work on a lady’s proper behavior (the unspoken rules as well as those everyone knows), not to mention a sister who, by her own admission, gets pregnant every time her husband sneezes in her direction (she’s at 11 children and counting), Violet doesn’t quite stand a chance at a normal life.  Especially given her radical views on marriage and propensity toward scientific endeavors – endeavors she has to hide from everyone, save her best friend, confidante and conspirator, Sebastian Malheur, a simple mister.  While Violet is the brains behind the experiments, Sebastian is the presenter and the public face of the scientific genius – not to mention a man who has known her his entire life, and loved her for most of it.

As familial alliances change and the society around the protagonists undergoes a transformation, so, too, do Violet and Sebastian change.  One of the things I absolutely loved about the book was the chance to watch the characters change and grow.  Despite feeling a touch repetitive in places (how many times can Violet lament her marriage and her husband’s untimely death), it was an absolute joy to watch these two people slowly mature, to see their relationship evolve.  Of course we all know what’s going to happen, given that this IS a romance, after all.  But the romantic bent isn’t overwhelming at all – it’s a subtle spice added to a tale of women’s suffrage and the growing equality movement.

There are some truly beautiful moments peppered throughout the novel.  I particularly like the denouement of the relationship between Violet and her rather intimidating mother.  My husband actually asked me just why I was doing a happy chair dance.  For me, it was completely and utterly satisfying, rather like a gooey caramel sundae topped with real whipped cream and two cherries.  Another absolutely lovely piece of the book is the easy, comfortable interplay between Sebastian and Violet.  It’s very rare that a relationship simply flows over the obstacles in its path rather than pushing through and over them.  Sebastian’s reputation as a rake ensures an utter lack of respect from his dying older brother, while Violet’s prickly, eccentric ways mean she’s usually left to her own devices.  I expected a bit more of the typical angsty awkwardness, but there was none to be found.  All I could see was a very believable, sweet and sensual relationship that flew in the face of expectation – both societal within the story and reader, on the outside.

Now that I’ve burbled happily about the things I enjoyed with the book, let me move on to the slightly less than perfect bits.  My only major complaint with the book was how long it felt.  At 250 pages, it’s considered rather “normal.”  There were times when it felt as though you were going back over the same ground to ensure that I, as a reader, understood that yes, Violet is apparently broken.  Yes, Sebastian has a bad relationship with his brother that’s colored every aspect of his life.  No, life in England during that time period was not kind toward the poor, dogs and women.  I was surprised to find that this is the third book in a series – it stands on its own quite well.  Though I wouldn’t have minded just a hint more history, a few more details about some of the other characters who made themselves known.

For the first time in a very long history of reading historical romances, I’ve found one that’s not only an entertaining read, but somewhat powerful in the presentation of strong, vulnerable, realistic characters presented in believable relationships.  Thank you so much for sharing this world with us – I can’t wait to get my hands on your back list!  A-

Previous article: REVIEW: Up in Knots by Gillian Archer
Next Post: Daily Deals: Dark thriller, Hearne the Hunter, and a Pern Box Set