I have been eagerly awaiting the next installment in your Chocolate series, and I’m delighted to say that it was worth the wait. You are writing my favorite type of series: all the books are set in the same world, but while the characters from past books make an appearance, they don’t take over the story and there is little to no sequel bait foreshadowing the next couple. Like The Chocolate Thief, The Chocolate Kiss features an opposites-attract, clash-of-cultures theme, but located in a quite different Parisian setting. 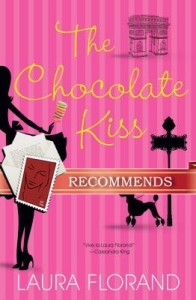 Magalie Chaudron lives with her aunts on the Île St. Louis, one of the two islands in the middle of the Seine, in the heart of Paris. The aunts are the proprietors of a salon de thé called La Maison des Sorcières, or The Witches’ House, and in addition to Aunt Aja’s very special tea, they make wondrous chocolate window displays and serve Magalie’s incomparable chocolat chaud. It’s evident from the first pages that young, lovely Magalie is hiding out to some degree: for her, a trip off the island requires donning clothing the way a knight dons armor.

The peaceful, slow-paced life of the salon and of the rest of the community is abruptly jolted with the news that Philippe Lyonnais, the celebrated pastry chef and master of the macaron, has decided to open his latest branch on the Île St. Louis, just down the road from the salon. Aunt Geneviève grandly declares that they will withstand the competition, but Magalie fears it could be the end of the Sorcières. She goes to Philippe’s shop and asks him to give up his plans, but of course he will do no such thing. And the battle lines are drawn.

Philippe arrives with his pastries and his macarons, and the residents and tourists on the Île flock to his store. He tries to reach out to Magalie but she rejects him and the special macarons he create to tempt her. But despite her efforts to remain unaffected by his presence, the arrival of the Lyonnais patisserie directly and indirectly alters her life: directly, because Philippe’s shop employees sneak over to drink her chocolat chaud and become part of her world, and indirectly because after he arrives Magalie takes up running every morning, leaving the Île and venturing into the streets of Paris.

This is one of the cleverest, most persuasive enemies-to-lovers stories I’ve read in a long time, probably because the basis of the conflict is so sympathetically and carefully formulated. It’s clear that Magalie doesn’t hate Philippe as much as she fears what his arrival represents. The shop, her aunts, and the Île itself are a refuge from her previous life, in which emotional uncertainty and rootlessness dominated. Philippe’s larger-than-life personality and equally outsize talent and success threaten her carefully constructed stability, a stability that she has achieved at the expense of a well-rounded life. When they finally get together, Magalie is part of the way toward trusting and sharing with a lover, but she still has some distance to go.

His eyes were still laughing, still inviting her to come in out of this cold day and curl up in his warmth. The richness of their blue was incredible. The tawny hair seemed to pull in sunshine, promising that winter-cold fingertips might find it like treasure if they sank into its depths. “Do you think I’m a pot of chocolate?”

She shook her head, hard. No, oh, no. Chocolate was easy; it was rich and reassuring, and it always cooperated with her.
Disappointment flickered across his face. What had he been imagining?

Being melted and stirred?

Oh. Her whole body tried to rise toward him so that she desperately wished there was something behind her besides smooth glass, so that she could grab on and hold herself in place. “Chocolate does what I ask it to,” she said crisply, and she turned to finally walk past him.

She kept her hands on her hips as she did it, elbows well out. Most men in nightclubs would give a little room to a woman keeping her elbows out, but Philippe just let hers connect with his ribs, let her arm fold back under the impact, her elbow slide across his midsection, her shoulder against his chest. He didn’t even flinch at the impact. Probably his jacket had absorbed it all.

She shot him an annoyed glance, way up, from right in close to his body. He tilted his head down, his focus on her absolute. “You’ve never asked me to do anything, Magalie.”

It was terrible, the power her name in his voice had over her. She understood now all those stories about giving away one’s true name. But that claim was so outrageous that she stopped there and half turned, the side of her arm still mid-rub against his chest. “I asked you not to come to my shop!”

“No, you didn’t. You tried to threaten me away. You’ve never asked me for anything, Magalie. For all you know, I’d give it to you.”

And he walked away from her. Into his shop with a long, confident stride, the king sweeping into his throne room.

If Magalie is all prickles and self-protection, Philippe is sure of himself and his talent, but he’s not alpha-annoying about it, and his confidence allows him to meet her more than halfway:

Keeping her fingers peeled back, he lifted her wrist, wickedly exposed, and grazed his faintly rough jaw all along the exquisitely sensitive inside of her forearm from wrist to elbow.

And purred roughly with delight when she gasped.

“Your wrists handcuffed to the bedposts?” she managed dryly. She was so proud of that dry tone. It felt like holding onto a little bit of herself. “Really?”

Again he laughed, a soft, joyous sound, intimate and dangerous. “I don’t seem vulnerable to you, Magalie? Submitted to your every desire?”

She twisted and for the first time gathered the strength of will to study his face, head-on, for a long moment. He just looked back. Her body was so much smaller, her position by far the more exposed and defenseless. And yet for that one long moment while he held her eyes, he did look vulnerable, almost as if he was tied naked to her bed, of his own volition, gazing at her as she prepared to undo him.

Arousal flooded her. Arousal that undid her. That had always been the problem. He undid her. And her was all she had.

Philippe may be an even more luscious hero than Sylvain was in The Chocolate Thief. I don’t know how you manage to write men whose attributes, when written out, make them seem too perfect, but who don’t read that way on the page at all. Philippe wasn’t always patient and understanding, but I felt as if he was always trying. Like Sylvain, Philippe has a loving, supportive family that goes a ways toward helping the reader understand how he has become the person we see. Who can resist someone like that? Definitely not I.

The other supporting characters stay on the right side of the clever/too-clever boundary, and the aunts, Geneviève and Aja, are terrific creations. In the first part of the book they come across (through Magalie’s POV) as lovable eccentrics, but as she grows and opens up, we realize that they are far more than that. Cade and Sylvain from The Chocolate Thief play key roles, but readers don’t need to have read it first to appreciate them here.

When I finished The Chocolate Thief, I wondered how the next book could be as good without repeating itself. I needn’t have worried. Philippe is similar to Sylvain, but he’s no carbon copy, and Magalie is very different from Cade. I liked Cade quite a bit, but Magalie is a more endearing character, and her backstory and growth arc are more poignant. As for Paris, it’s just as wonderful, and there is something magical about the Île St. Louis. It must be the chocolat chaud they make there. Grade: A-