I was introduced to your work through the Blogger Bundle Volume II: WeWriteRomance.com Selects Presents

that was released by Harlequin at the start of the year.   I really enjoyed your work and after exhausting your digital backlist (which, at the time, was about 4 titles) I proceeded to hunt down most of your print backlist through used book resources.   My favorite work was The Bellini Bride but as it was used and few people I know had read it, I wasn’t able to chat with anyone about the book.   So I forced Robin to read it and we spent an hour or two gabbing about the greatness of this book.   But now it’s been released in digital format and now I can share with the rest of the readership why I think this Harlequin Presents book is more subversive of the romance tropes than many single titles out there. 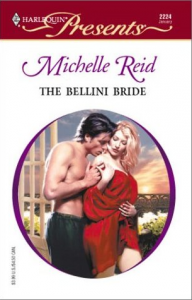 The story opens with Marco Bellini, a wealthy member of the elite Italian society, contemplating his mistress and the fact that he needs to marry.   Marco thinks to himself that he loves everything about her but what she is.   Marco views his mistress, Antonia, as a woman lacking in certain moral value. She’s not good enough to be wife material because Antonia has been the lover of a famous painter, Stefan Kranst who immortalized her nude body in several paintings.

Antonia throws out to him that half the reason he is with her is because of her noteriety.

‘You got what you came looking for, Marco,’ she told him. ‘You got the woman in the painting. You had no interest in me as a living breathing human being!’

Two streaks of colour hit his cheekbones, his whole body stiffened in affront. ‘That’s not true,’ he denied.

‘Yes, it is,’ she insisted. ‘Take away the kudos in being able to lay claim to Stefan Kranst’s notoriously sexy model, and it would take away the desire; I always knew that.’

While some may be frustrated that Antonia stays with Marco despite the fact she knows that he doesn’t love her and despite the fact that he does not view her as an equal.   But Antonia is a woman who has loved unwisely, at most, and through the story we begin to see her gain agency.   Part of Marco’s failure to perceive her as anything but a bedmate, as his mistress, is in part due to his own myopia, but also because Antonia does not trust Marco to share with him insights that might make her seem more real to him. True, he should have sought this information out, but he does not until he begins to acknowledge that losing Antonia would be worse than any public shame.

Marco wants to believe he is a decent and honorable man and certainly he has not bought Antonia’s affections.   He won her affections but in reality, Marco has to come to grips with the cavalier way he has been treating Antonia and his own complicated feelings toward her and her public face.   The themes in the book could have gone wildly wrong and the payoff begins to come out half way through the book when Marcos begins to realize the depth of his hipocrisy.   He loved the art and the art form of the nude and loved the painting of Antonia and the idea Antonia. Once he had her, possessed her like the painting, he began to like the painting less and less because he viewed the exposure of nudity of someone he knew as something of which to be shameful.   He was ashamed of Antonia.   A bigot. A hypocrite.

But his mother had admired the woman in the painting before she had known Antonia had moved in with him. Now all she saw was a woman willing to expose herself for all to see and who possessed no conscience about doing it. She also despaired, because her son had not yet assuaged what she saw as his obsession with both the painting and the woman.

And because he was a proud man, he could not acknowledge that he was in love within someone that he felt shame about; that those he cared about would feel shame about. Marco then realizes that it is he who should be ashamed.   He realizes that here he is, this supposed connoisseur of art, placing moral judgments on the subject of that art.   My complaints about the book are not the prose which Robin has called rough (I didn’t notice) but that I wish the story arc for Antonia had been a little stronger.   I think part of this was due to space constraints.   But what I love is that this story takes the idea of the purity of the heroine as a commodity and challenges the hypocritical views toward that. In order for Marco to win Antonia back, he must accept that others will always perceive her to be less than moral, that others may always look down on her as he had once had. Marco does and faces down that cynosure in a spectacular way. While imperfect in some ways, this book is on my keeper shelf. A-