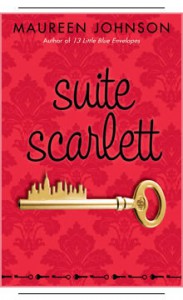 Scarlett Martin and her family live in a small hotel in NYC. Oh, not just any hotel but a once beautiful, though now slightly frayed around the edges, example of Art Deco which the family has owned since it opened in the 1920s. All the family, parents, older brother Spencer, older sister Lola, Scarlett and baby sister Marlene pitch in to keep it going but, frankly, with the guest load they have, or rather don’t have, something needs to happen.

And that something is Amy Amberson. Vibrant, outgoing, sweeping Scarlett and everyone else along with her, Amy arrives and immediately begins to manage Scarlett, who becomes “O’Hara,” girl Friday, and Spencer who is desperately trying to achieve his dream of acting with garage staging of “Hamlet.” Then there’s Lola and her wealthy, though not too bright, boyfriend Chip and Marlene, who gets away with murder all because she’s a cancer survivor. It might be summer vacation but Scarlett’s running flat out to try and keep up with and on top of it all before everything risks spinning out of control.

I love a book with subtle humor which arises out of the characters and events in it and which doesn’t rely on pratfalls or making fun of anyone. Even the chapter titles amuse me here. But, despite the set up of living in a boutique hotel, the whole thing seems realistic and believable too. The plot never ventures into “okay, now this is going too far” territory.

And speaking of the setting, it all reminds me slightly of Never Land with Amy as an irrepressible Peter Pan figure leading Scarlett/Wendy deeper into chaos as the story unfolds. Here the children are mainly in charge of events while the parents are secondary and rarely involved in the action except to be people who must be kept from knowing most of what’s going on. Amy is an adult with money and so has more independence than the Martin children but she’s still not quite grown up, or doesn’t act it, and makes mistakes that even Scarlett sees coming. And then it’s usually up to Scarlett to fix and straighten things out.

The relationship of the children makes the book. Marlene has been coddled yet kept from everything the others do and take for granted. I enjoyed watching her finally enter into the circle of her older siblings. Lola and Spencer are there to be PITAs, sometimes, but also back Scarlett up and present a solid front to the world. Spencer is willing to risk discord with Scarlett’s “maybe boyfriend” during the show to support his little sister. And the two of them have to deal with the fact that Scarlett is venturing into the world of dating.

Speaking of which, I doubt there are many people who haven’t, at one time or the other, been in her shoes. Though she’s watched Spencer’s many, week-long romances and Lola’s relationship with someone the others feel is not worthy of her, Scarlett’s never dated before so the whole thing is new to her. She’s not sure what’s going on or even if she’s really dating. The problems she runs into with Eric and his slippery ways are realistic – he’s older and already into game/role playing while she’s running just to catch up.

New York City is almost a character in the book. You add countless, every day, touches that indicate the story is taking place there and no where else as well as making use of the well known theater setting. Scarlett sees her hometown slightly anew through Eric’s eyes which also serves to show it to us. I doubt there are many other American cities where this book could be set and I enjoyed my “trip” there while the action lasted.

“Suite Scarlett” is a direct prequel to “Scarlett Fever” so I’m glad to took the time to read it first. As I finished the book, I was left with several questions I hope will be answered in book two. Wither Lola and Chip? How will Amy’s venture into agenting play out? Will Spencer’s dream come true? Is Marlene fully a part of the action now? And what’s in store for Scarlett once school starts again? I can’t wait to find out.

| nook | BN | Borders |
Fictionwise (not present) | Books on Board (audio format only?)