REVIEW: Suddenly You by Sarah Mayberry

Immediately after reading your latest, Suddenly You, I knew exactly what my review of it should say:

“Yet another well-done book by Ms. Mayberry with appealing characters and a sweet love story.”

However, DA readers expect a bit more. And while their time would be better spent reading your prose than mine, here goes. 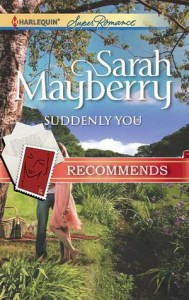 The hero of Ms. Mayberry’s latest contemporary romance is Harry Porter whom readers may have met in All They Need. I hadn’t read All They Need prior to reading Suddenly You and didn’t need to. (I’ve since then read All They Need and enjoyed it.) Harry looks fierce—he’s covered in tribal tattoos, sports rings in his ears, has bulging muscles, and wears biker boots. But, though he looks like a bad boy, he’s one of the sweetest (but not at all beta) heroes Ms. Mayberry’s created.

Harry is 30 and enjoying the hell out of his footloose life. He’s got a cool car-a 1972 HQ Monaro GTS-, a job he shows up for and then leaves without a care, a no fuss little house, good buddies, and all the women he wants—even though he only wants them for a night or two. One Friday night, as he’s headed for a night on the town, jamming to Midnight Oil and thinking about burgers and beer, he sees a broken down car on the side of the road. It’s an ugly yellow and he recognizes it as that of Pippa White, an ex-girlfriend of his best friend Steve. Harry stops to help her, even though it’s a little awkward; Pippa and Steve broke up when Pippa got pregnant and refused to get an abortion. The last time Harry saw Pippa was six months ago when, inexplicably to him, he’d stopped by the hospital when she’d had her daughter Alice. But he’s always liked Pippa and he’s a mechanic, so offering her some help with her car seems like the right thing to do.

Harry diagnoses the problem—a blown head gasket—and offers to call a tow truck for Pippa. She won’t let him; in fact, she is fairly resistant to any help from him at all. It takes all of Harry’s charm and determination to just get her to let Harry give Pippa and Alice a ride home. Harry doesn’t like leaving the car but Pippa assures him she’ll take care of it. Harry drives Pippa and Alice home and is somewhat appalled to see what a dump it is. Harry knows that Steve and Pippa parted poorly—Steve has complained bitterly about Pippa sicing the government on him to get more money out of him—but Harry is sure Steve is giving Alice and Pippa enough money to live safely and comfortably. Harry is so sure, in fact, that later that night, while partying at their favorite bar with Steve, he tells Steve about Pippa’s expensive car problem. Steve clearly doesn’t care a bit and this, Harry finds, does not sit well with him.

When, after a few days, Harry realizes Pippa still hasn’t had her car towed, he goes to tell her she really needs to or else it could get impounded. Pippa is dismayed—she tells him she thought she’d have a few weeks to deal with the problem. Suddenly, Harry realizes Pippa can’t afford to have her car fixed. He asks her bluntly what she’s going to do and she, unable to lie, tells him the truth.

She gave a short, sharp laugh. “You always were honest to a fault. Okay, you’re right, Harry. I can’t afford to fix the car right now. I’m scraping some money together but the gas bill came in and I figure we need hot water more than we need a car. So maybe the council will impound my car and I’ll have to live with that until I can figure something out.”

Pippa shrugged as though she didn’t give a damn but her cheeks were pink and her shoulders tense….

“What about Steve?” Because it seemed to him that was the next natural step, no matter the tensions between them.

“I’ll ask him. If it’d make it easier for you to swallow.”

He didn’t know why he was making a federal case out of it. It was her car, her life. She was free to do whatever she liked. Certainly none of it was his responsibility. So why was he offering to be her mouthpiece with his best mate?

Pippa sighed. “It’s incredibly generous of you to offer, but you don’t want to do that.”

“I know. But it won’t make any difference. Steve won’t want to help me.”

“Look, even if Steve’s pissed with you, he’ll step up.”

“It’s nice you believe that, but since he’s gone to the trouble of falsifying the books for his business to avoid paying child support, you’ll understand if I don’t hold my breath on that one.”

He was ready to jump to his mate’s defense. No way would Steve turn his back on his responsibilities. Alice was his kid, after all. His daughter.

Something stopped him before the denial left his mouth, however.

Maybe it was the world-weary note to Pippa’s voice and the steadiness of her gaze.

Or maybe it was the memory of the utterly blank, disinterested expression on Steve’s face Friday night.

Harry decides to fix Pippa’s car himself, even though he’s not sure why he’s doing so. The reader knows why he’s doing it. Harry is such a good guy—there’s just no way he’s letting Pippa and little Alice struggle when he can so easily aid them. He also tries to talk Steve into manning up and is upset when Steve says there’s no way in hell he’s helping Pippa or Alice; as far as Steve’s concerned, once Pippa decided to have a child Steve did not want, that child is all Pippa’s problem. Harry decides that if Steve isn’t going to help Pippa, he will. He begins to spend time with Pippa and Alice, fixing all the broken crap in her house. Pippa gives him dinner each time he comes over and slowly the two become more than just friends.

Here are ten fab things about this book:

1)    Alice is adorable and yet real. She poops, she screams, she keeps Pippa up at night, and yet, she makes me want to be a grandma. It’s easy to see why, although she makes him nervous, Harry falls for Alice too.

4)    The sex scenes are—according to me—the hottest Ms. Mayberry’s ever written. They are among the best I’ve read because they encompass all that Harry and Pippa and their relationship are. Plus they are just incendiary.

5)    Pippa and Harry don’t fall in love overnight or easily find their way to their HEA. Pippa doesn’t want to repeat the mistakes she made with Steve and she has Alice to consider. As hot as Harry is—and man is he hot—she’s thinking about more than just her love life. Harry, too, isn’t sure he wants true love. He genuinely likes his carefree life and, as enticing as Pippa is, he’s not sure giving it up will make him happy.

6)    Harry’s relationship with his father is realistic and moving. Harry’s always refused to work in his dad’s shop and he’s made it clear he doesn’t want to take the place over when his dad retires. The way his dad handles his disappointment and his love for Harry is lovely.

7)    For almost everyone in this book, money matters. Pippa works a shift job while trying to go to school and she thinks about every dollar she spends. Her mom is a retiree with a limited income. Harry’s family and friends—with the exception of his sister and her husband (the couple from All They Need)—are all solidly middle class and comfortable being so. Pippa longs not for designer jeans but for enough money to pay the water bill. The people in this book seem real, grounded in the world we actually live in.

8)    Parts of this book are so funny I’m smiling about them still. Never has a tube of wood filler been so amusing.

9)    Did I mention the sex scenes? And, if so, did I say how well desire is portrayed? I think somehow lust is different from desire—the latter is more fraught with emotion. The desire in this book is sexy and real—I can’t imagine anyone who wouldn’t want to be wanted in the way Harry wants Pippa.

10)  This story is all about true love. Not sappy, fairy-tale love, but the kind of love that makes people believe life is worth living. Every relationship explored in any depth in Suddenly You is one worth having. As Pippa says, when she explains to Harry what Alice means to her,

It’s sort of…I don’t know…opened my heart. Made life less about me. And I mean that in a good way. Loving someone and wanting them to be happy is a pretty great mission to have, in my book.”

In the beginning of this review, I said Suddenly You is “Yet another well-done book by Ms. Mayberry with appealing characters and a sweet love story.” But writing this review has made me realize that’s not what I’d say.

So here’s my one sentence review of Suddenly You:

→ Dabney
Previous article: Thursday News: The male contraceptive; Hospital power failure leads to research loss; More on the history of prosthetics
Next Post: Friday News: Harlequin Revenues Down; YA revenues up; Mike Shatzkin frustrated by rest of us failing to recognize publishing’s uniqueness