As a Paranormal reader and reviewer, the concept of a series is both the blessing and bane of my existence. Ever heard of a stand-alone Paranormal? I’ve gotta look around and see if they actually occur…but back to the matter at hand. After the first book, it’s crystal clear as to whether I’ll continue the series. But then I’m faced with worry: will the author’s work in the second (third, ninth…what have you) measure up? And if it doesn’t, do I pray that the author rediscovers the magic that made the first book so special and plow ahead? Because of this insanity, I have a tendency to sit on books until I’ve worked up the mental courage to dive in and read. I nearly put Storm’s Heart aside to “read later” an am so happy I didn’t. 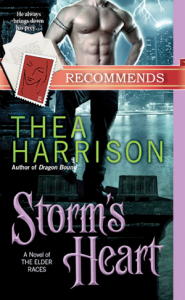 Thistle “Tricks” Periwinkle was the engine behind Culebre Enterprises PR machine and a princess in hiding, until Dragos, Pia and the sentinels killed the evil Dark Fae Urien Lorelle back in Dragon Bound. Tricks was under Dragos’ protection and (no spoiler here) had a major secret: she’s Niniane Lorelle, the heir to the Dark Fae throne and the one that got away from Urien Lorelle’s killing spree 200 years ago. After revealing her identity, Niniane goes to Chicago on her own to meet with the Dark Fae delegation befor crossing over into Dark Fae land for her coronation. Now, you know that a lost Dark Fae princess with bajillions of enemies stepping into a power vacuume won’t have a problem at all right? Riiiiight. You may ask, “well why the fuck would Dragos let her go off on her own?” Solid reasoning here folks: Niniane can’t be seen as an agent of the Wyr; she needs to stand on her own two feet to take her crown. Of course, there’s someone (or someones…I’m not going to give anything away here, but an astute reader will probably figure it out once the baddie(s) appear) who doesn’t want that to happen and wants the Dark Fae crown all to themselves. Within hours of arriving in Chi-town Niniane is the victim of an assassination attempt that’s caught on some moron’s cell phone camera. Dragos sends Tiago Black Eagle to Chicago to find Niniane and figure out what’s going on. I’d hate to be that moron when the sentinels arrive.

Tiago is ancient and in his Wyr form is the legendary giant thunderbird. In human form I’m guessing he looks quite a bit like a Native American version of Dwayne Johnson ’cause that’s something that Niniane put into my head, which doesn’t suck. Tiago headed up Dragos’ private army, and being in New York after the, er, disposal of Urien Lorelle is making him a bit stir crazy:

Vengeance, served hot. That had been Tiago’s kind of party.

Since then all he had been doing was cleanup and busywork. Make sure all involved Goblins were dead, check. Chase down and slaughter any Dark Fae that had been part of Urien’s party, check. Go to sleep with his thumb up his ass, check.”

Tiago’s relationship with Niniane is more distant than the other sentinels simply due to geography. When he sees the awful video footage of Niniane being attacked by her cousin he’s enraged that someone is trying to hurt her and he immediately volunteers for a “leave of absence” and goes to track her down. When he finds her in a Motel 6, I was sure they were going to burn the place down with all that heat.

He glowered, thrown off balance by his own intense, unwelcome reaction. Rein it in, stud. Under the reek of smoke he could smell feminine perfume and – was that the scent of blood?

“Oh, you shouldn’ta done that,” Niniane said. Large upside-down Fae eyes tried to focus on him. “Breaking and entering. That’s against the law.” She sniggered.

Tiago took refuge from his strange feelings in the much more familiar emotion of aggression. “What are you doing?” he demanded. “What do you mean ‘go back to New York’? Do I smell blood?”

He had no idea what she was babbling about. Something about the stupid song she had been trying to sing. He pushed the door shut with a foot and strode over to stub out the smoldering cigarette. “This is disgusting,” he snapped. “Why haven’t you called? We’ve been worried sick about you.”

“Whoa,” she said. She looked up-or down, as it were-at Tiago’s crotch, which had stopped right in front of her. He was one scary mean-looking oversized barbarian, in black jeans, black boots and black leather vest. He bristled with weapons and anger, and muscles bulged everywhere. His crotch sported a significant bulge too. A very significant bulge. She licked her lips. She might be drunk but she wasn’t dead. She wouldn’t be forgetting this sight in a hurry.

What follows is a superb game of cat, mouse and politics.

Storm’s Heart doesn’t have the same geographic range as Dragon Bound, but doesn’t lack for action. The book plays a superb game of cat, mouse and politics as the Dark Fae, a few Vampires, the Wyr sentinels and humans work it out in Chicago and the Dark Fae demesne. The small geographic range gives us time to really get to know Tiago and Niniane. Tiago is a scowly alpha guy, but his inner dialogue is grimly humorous and he deals with himself and his feelings toward Niniane honestly.

MINI SPOILER: [spoiler]That Tiago is more than content to play second fiddle to Niniane in absolutely every way except when it comes to her security had me so darn happy.[/spoiler]

Initially Niniane thinks she’s playing the part of Queen, but it’s obvious to both the reader and Tiago from the beginning that she’s got the royalty gene (whatever that may be) ingrained in her and she was meant to rule over her people with a firm but benevolent hand. Her struggles with her feelings, her Elizabeth I-like need to be seen as a “true” queen and the burden of the future of the Dark Fae are all shown through the course of the book. There were times that my heart ached for her, and times when I wanted to cheer because she refused to give up. Because this is a Paranormal, the violence wasn’t unexpected, and Ms. Harrison handles it well, rather than glossing over it she treats each character and their destiny seriously. Yes, there is a “mate” thing that happens with the Wyr, but it’s nice to know it’s not “fated mate”. However, once they get down to the mating business it’s one and done.

There is a clear preview of who’s up next in the series, and yeah…I can’t wait to find out all the secrets surrounding the next couple. I thoroughly enjoyed Storm’s Heart and am reading it again as I wait for Serpent’s Kiss. A-