Christmas is the perfect time to start from scratch

Lieutenant Sully Jax saved his unit during an IED attack, but he couldn’t save his marriage. He can’t even remember it. Recovered from his injuries, he’s come home to the family and friends he knows—and an ex-wife who’s a stranger to him.

Lucy Crabtree was heartbroken last Christmas when Sully announced his plan to go on one last tour of duty, and devastated when he asked for a divorce after he awoke in the hospital with no memory of her. She’s finally moving on from her hurt and from losing the man she loved more than anything, and her cookie-baking business is taking off just in time for the holidays. But now Sully’s back, and she can’t deny she still loves him. But how can she trust her heart to someone who breaks it every time she sees him?

Sully might not remember Lucy, but something inside won’t let her go. With every bite of her cookies, he finds a new love for Lucy, and he soon realizes he wants to rebuild his life…with her by his side.

I’ve mentioned in other reviews that amnesia books usually give me hives because they’d done so poorly. KONK – memory lost. 2nd KONK – whew, I’ve got it back now! just when the plot demands it. So my skeptical self picked out this book just to see if I’d be able to get through it. And to see if you could pack all this book into a category sized book. When I realized it’s actually a novella, I thought, “No way in hell can she do all this and make me believe it in 36,000 words.” Well, I stand corrected. The hell you certainly did. 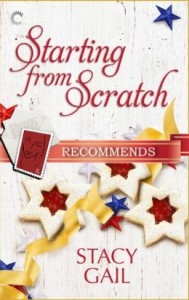 The book is packed with well drawn characters. True, some of them don’t take up as much story space as others but I get a clear picture of them all and would love to meet some of them including the owners of the bakery where Lucy creates tempting sugar yummies to her best friend growing up with whom she has grin inducing dialog.

When Lucy gripes about not wanting to celebrate Christmas this year – understandable given the story – Coe shoots back that every time she says that, one of Santa’s elves explodes. Coe also has an awesome Christmas wish list. How can you not like someone who asks Lucy to get him a ukulele, sidewalk chalk and a light saber pen just because he knows it will take his friend’s mind off the horrible memories of her last Christmas? I hope you have further plans for Coe. .

And speaking of horrible memories, Lucy certainly has more than her fair share. But at least she has them while Sully seems to have none of her. Their separation before his last deployment – where he suffered a TBI (traumatic brain injury) and now has Retrograde Amnesia – was horrible for both but when Sully came home in a coma and then not only didn’t remember anything about Lucy but actively screamed at the sight of her, then wanted a divorce – that would about kill me too.

Poor Lucy’s heart has been breaking for a year now and just when she thinks she might be coming to terms with the ashes of her life, Sully arrives back in their hometown from his rehab. Talk about awkward meetings. Right about when I’m about to throw things because I hate how much she’s sacrificed as a military wife only to not lose her husband to death but still lose him due to the amnesia anyway, you toss in casual reminders of how much Sully has lost – not only mentally but physically as well. He truly is a wounded warrior. Life has not been kind to either of them though only Lucy remembers the awful secret he dropped on her without warning before he left on his deployment and how terribly she reacted.

There is a lot to process here including background information on the people, the town, the circumstances, military life and a bit about the type of therapy the doctors recommended for Sully. Yet I never felt info overload or that I had missed something important. Wow, seriously well done.

Yet could these two find some common ground or better still was there a chance for Sully to regain what he’d lost? I had my doubts at times as to how you’d pull it off or if it could be done in a way to satisfy me. And hot sex – would there be any physical stuff? You managed it all even if the denouement came down to the wire. Is there a happy amnesia ending? I think as well as could be with hope for more. Is the sex smoking? I thought so. Does Sully manage to make up for all the hurt he – even inadvertently – caused Lucy? Gawd, that letter had me crying as I read it, never mind fictional Lucy. Do I wish I’d read this in time for it to be a November rec? Sure do! But it will be a recommended read anyway and might just make my end of the year Top Reads as well. A-