When I reviewed The Nonesuch a few months ago during Sourcebooks’ summer Heyer sale, I mentioned in passing that I really wanted to review Sprig Muslin, but it hadn’t been digitized yet. Now it is, so as promised, here’s a review. 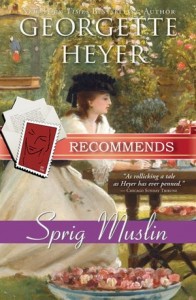 This book wasn’t in my Top 10 Heyer Regencies during the first decade or so that I read her (that would be my teens and early twenties). It was too slow and too rural, and the hero and heroine weren’t exciting enough. I was totally a These Old Shades, Devil’s Cub, and Frederica kind of girl. But as I reread it in later years, I grew to appreciate the quiet humor. I especially came to love Lady Hester, the plain spinster heroine, and it’s become one of my very favorite Heyers.

Sprig Muslin chronicles the romance of Lady Hester Theale, the aging, on-the-shelf daughter of a gaming-mad Earl, and Sir Gareth Ludlow, one of Heyer’s patented top-of-the-trees, Corinthian heroes. Having reached his mid-thirties and lost his only brother at Salamanca, Sir Gareth accepts that he has to marry and produce heirs. But since losing his beautiful and much beloved fiancée in a riding accident a decade agp, he believes he is unable to offer a wife love. He chooses Hester, an old friend, over younger and more beautiful candidates because he thinks that marriage to him will be better for her than her current life as a general dogsbody for her father and her siblings’ families. But Hester shocks everyone, not least Sir Gareth, when she turns him down:

“I can offer you a position of the first consequence. You would be at no one’s beck and call, you would be your own mistress—with a husband who, I promise you, would not make unreasonable demands of you. You may be sure that I should always attend to your wishes, and hold you in respect as well as affection. Would that not mean a happier life than the one you now lead?”

Her face was very white; she pulled her hand away, saying in a stifled voice: “No—anguish!”

This seemed so strange a thing for her to have said that he thought he could not have heard her aright. “I beg your pardon?” he said blankly.

She had moved away from him in some agitation, and said now, with her back turned to him: “I didn’t mean it— don’t heed it! I say such foolish things! Pray forgive me! I am so deeply grateful to you! Your wife will be the happiest of females, unless she is a monster, and I do hope you won’t marry a monster! If only I could find my handkerchief!”

Gareth’s proposal visit to Brancaster is complicated by his meeting with Amanda, a lovely sixteen-year-old who has run away from home in order to compel her grandfather to agree to her marriage to a serving officer who is a younger son. She refuses to tell Gareth her name or address, and he cannot leave her on her own, so he takes her with him, to the consternation of Hester’s family (but not Hester). When Amanda runs away, Gareth must postpone any attempt to persuade Hester to change her mind and go after her. In the meantime Amanda has found a younger and more credulous knight-errant, and an accident occurs when Gareth catches up to them. When they can’t think of anyone else to turn to, the panicked and guilt-stricken pair beseech Hester to come and nurse Gareth until he recovers.

Gareth can’t be moved, so the four wind up in an inn in a tiny village, isolated from their families and friends and with their whereabouts unknown. This suits Amanda perfectly, because her grandfather won’t be able to find her and thus will submit to her ultimatum. Hester has her hands full caring for Gareth, and she isn’t averse to being cut off from her usual life for a while. As Gareth recovers, he sees a different side to Hester, and his feelings of friendship deepen into something else:

Lady Hester emerged from her hiding-place, her cap now wildly askew. Sir Gareth lay back against his pillows, watching her, a question behind the brimming laughter in his eyes.

“Gareth!” said Hester, in an awed voice. “You must own that Amanda is wonderful! I should never have thought of saying I was your natural sister!”

He was shaking with laughter, his hand pressed instinctively to his hurt shoulder. “No? Nor I, my dear!”

Suddenly she began to laugh too. “Oh, dear, of all the absurd situations—! I was just thinking how W—Widmore would l—look if he knew!”

The thought was too much for her. She sat down in the Windsor chair, and laughed till she cried. Mopping her streaming eyes at last, she said: “I don’t think I have ever laughed so much in all my life. But I must say, Gareth, there is one thing about this new story of Amanda’s which I cannot like!”

“Yes,” she said, sober again. “It was not well done of Amanda to make up such a tale about your father. For he was a most excellent person, and it seems quite dreadful to be slandering him! Really, Gareth, you should have denied it!”

“I assure you, he would have delighted in the story, for he was blessed with a lively sense of humour,” Sir Gareth replied. He looked at her, a glimmer in his eyes, and a smile quivering on his lips. “Do you know, Hester, in all these years I have held you in esteem and regard, yet I never knew you until we were pitchforked into this fantastic imbroglio? Certainly Amanda is wonderful! I must be eternally grateful to her!”

There’s not a lot of plot to this story. Gareth offers for Hester and is turned down; Amanda runs away to force her grandfather to bend to her will; Gareth is injured and must be nursed back to health. Amanda’s knight-errant, Hildebrand, stays a friend because Amanda is unshakeably devoted to her Brigade-Major.

But what the novel lacks in plot it makes up for in characterizations. Amanda could have been intensely annoying, but her determination and her commitment are admirable. Hildebrand, Hester’s family, and the innkeeper and his sister are portrayed with Heyer’s usual deft touch. The book is chock full of sparkling dialogue, and it is relatively free of the cant that Heyer loved so much.

Best of all, though, is the way the romance unfolds. There is nothing external (apart from Gareth’s injury) that drives the couple together or apart. Hester is truly a plain-Jane, downtrodden spinster when we meet her, but she blossoms away from her family. Heyer shows us her wit, humor, and intelligence, all of which Hester has suppressed during years of living with her unsympathetic, uninterested, unimaginative family. In the end, she gets Gareth on her terms, not his.

Gareth is saved from being unbearably arrogant at the beginning of the novel by his innate decency; his assumption that the best Hester can do is a loveless marriage is harsh but probably true, and he genuinely believes that his ability to fall in love died with his fiancée.

By the end of the story, Heyer convinces us not only that the handsome and sought-after Gareth can fall in love with someone like Hester, but that she is the ideal person for him at this point in his life. And she does this not by turning Hester into a different woman or by demonizing his late fiancée but by revealing to us and to Gareth the wonderful woman who has been trapped under that spinster exterior.

Note: this book is currently $1.99 at Amazon