It’s no secret around here that you are one of my autobuy authors. Amazingly, however, I have not yet read every single one of your stories. Snowball in Hell was originally published in 2007; this edition is a slightly revised version. It is a standalone novel, shorter than Fair Game or the books in the Adrien English series, but definitely longer than a novella. Set in World War II Los Angeles, it combines a noirish murder mystery plot with a tentative, slowly developing romance between a police detective and a newspaper reporter. I should note at the outset that the ending is not an unambiguous HEA, but rather a hopeful HFN. 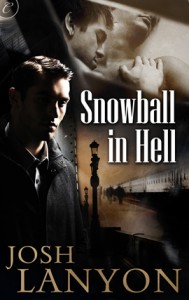 Mathew Spain is a widower and police detective who returns to his job with the LAPD after he is wounded at Guadalcanal. Nathan Doyle is a journalist who comes home and takes a position with an LA daily after suffering shrapnel wounds in the North African campaign. The two meet when a body is discovered in the La Brea tar pits. Nathan knows the deceased, Philip Arlen, and the rest of the wealthy Arlen family. His connections to the Arlens bring him into repeated contact with Matt, who is investigating the case.

Both Matt and Nathan are attracted to each other, but they initially ignore their feelings. Nathan assumes Matt is straight and therefore off-limits, and Matt doesn’t know quite what do do with the knowledge that he’s attracted to men. Despite having had sexual encounters with men during his military service, Matt thinks of himself as heterosexual; after all, he sincerely loved his sweetheart, Rachel, who became his wife, and he enjoyed making love with her. He treats his behavior when he was away at war as context-specific. Nathan is much clearer about his own sexuality, but he isn’t comfortable with it, and he sees his sexual longings as shameful urges to be dealt with quickly and unsympathetically, rather than as natural feelings that accompany a desire for a loving and stable relationship. The contrast you draw between Matt, who is less self-aware about his sexuality but much more comfortable with himself, and Nathan, who knows who he is, sexually speaking, but fights it all the time, messes with the more common relationship trope, where the veteran educates the newbie. It’s interesting, and it feels appropriate for a time period in which homosexuality was stigmatized, homosexual practices were criminalized, and gay men had little choice but to remain closeted.

The mystery plot is well written and paced. From the opening pages, when we see Phil Arlen’s body and meet Doyle and Spain, the style is very cinematic. It reminded me both of the Thin Man films (in terms of the murder plot and characterizations of the possible suspects) and movies like The Big Sleep (in terms of the noirish style). The style harks back to Dashiell Hammett and Raymond Chandler, but the overall feel is less grim, even in the more serious and emotionally difficult stretches. The suspects range from several members of the Arlen family, Phil Arlen’s wife and brother-in-law, the singer with whom Phil was having an affair, and the owners of the club at which the singer performed. The pursuit of suspects takes our two heroes into the various Arlen households, the club, and up and down California, and their chase has the requisite number of misdirections and wild goose chases. I did figure out whodunit before the final reveal, but I very much enjoyed the ride.

The cinematic feel of the novel arises not only from the style, but also from the dense, textured depiction of Los Angeles in the 1940s. I kept seeing movie images in my head as I was reading, not because the book is copying them, but because the story inhabits the same world. Each scene, whether long or short, is beautifully evocative. During the club scene I was visualizing supper clubs from an Astaire and Rogers movie. During the Arlen home scenes, I was reminded of the Nick and Nora movie with Jimmy Stewart. And okay, during the inn scene, I thought of White Christmas. I know that’s set later. But it was an empty inn, at Christmas! How could I not?

The sequence at the inn is critical to the development of Matt and Nathan’s relationship. When Nathan is injured and the suspect gets away, Matt stays behind to look after Nathan, and Matt gives voice to his feelings:

Spain said, “You and me will have to take the train back. The day after tomorrow.”

Noonan’s thugs must have really conked him because he just couldn’t seem to connect the dots. “The day after tomorrow?”

Nathan let that sink in for a moment. Christmas Eve? Then he protested, “I don’t understand. Why would you-‘?”

Spain’s eyes met Nathan’s once more, but there was something funny in his expression. “We didn’t want to move you. The doctor said you needed complete rest and quiet.”

“The hell with that.” And then, slowly, “You could have just left me on my own.”

Nathan couldn’t seem to tear his gaze away. He wondered if he was still asleep, dreaming maybe. Or maybe what Spain was saying was that Nathan was in custody, that he didn’t trust him to come back to Los Angeles on his own.

Or-‘was Spain setting a trap for him? His heart jerked.

Was there a remote chance that Spain intended what he seemed to be saying with those honey-brown eyes?

“I don’t understand,” Nathan said at last, huskily, terrified that even this much was giving himself away.

Spain reached over and covered Nathan’s hand with the warm strength of his own. “I’m hoping you do.”

And after a shocked moment, Nathan turned his hand, intertwining his fingers with Spain. He was almost afraid to look at Spain’s face, but when he did, Spain looked as naked and vulnerable as he felt.

Given the era and our heroes’ respective professions, it would require a major suspension of disbelief for their romance to result in an HEA. And it doesn’t. Indeed, Nathan engages in more than one era-appropriate instance of anonymous sex both before and after their time together over Christmas. This behavior fits the context, because even though Matt is emotionally attracted to Nathan, neither man can see a relationship as a possibility; even a superficial sexual relationship puts them at risk of being discovered. The story reminds the reader how dangerous acting on any type of m/m sex or love was at the time, and our heroes are well aware of these dangers. The scenes with Nathan and his pickups are emotionally intense because they are not only about Nathan’s desires, but about his ambivalence and his recklessness. By the end of the novel, we are hopeful about their future, but we are also acutely aware of the hurdles before them.

This is a gem of a novel. The language and writing style is flavored with 1940s idiom without being overly slangy. There is nothing extraneous; the shorter length provides a tight, focused plot and story. At the same time, though, the mystery has a satisfying number of twists and turns.  We don’t get to know Matt and Nathan as well as we would in a longer book, but we learn enough to give us a good sense of who they are and how their relationship will unfold. As I said at the outset, it’s not an obvious HEA, but there is optimism. At least I am determined to see it that way! Grade: A-