REVIEW: Sleeping with Her Enemy by Jenny Holiday 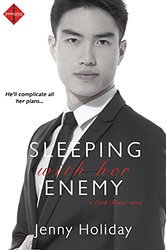 He’ll complicate all her plans…

Amy Morrison is supposed to be at her wedding. But when her husband-to-be jilts her at the altar, a distraught Amy runs to the only place she feels safe—her office. Besides, everyone who works on her floor is at her wedding…except him. Dax Harris. Playboy, executive, and Amy’s official office enemy.

While he and Amy don’t see eye-to-eye on the best of days, Dax can’t help but feel badly when he sees Amy mid-meltdown. Next thing he knows, he’s gotten her good and drunk, and they’re making out like two teenagers. And since neither of them want anything serious, why shouldn’t they be frenemies-with-benefits? Because there is no possible way they could ever fall for each other…

Thank God I’m a shallow person when it comes to covers and that Jane posted this book in our Daily Deals because of the hot Asian guy. I thought he was hot too and then readers Laura and Jeannie pitched in and said the book is actually good so I took a chance on it. I’d been frantically looking for a last book to round out my Top Ten list – even though I’ve had years in the past when I haven’t had ten books and I’ve lived with it – and also really wanted a contemporary category book in that list and voila, here it is.

I have to wonder why the title isn’t “Sleeping with Her Frenemy,” as that’s what Dax and Amy are when our story begins. She’s a smart professional woman, he’s a brilliant computer coding CEO type but they certainly act like they’re in the 3rd grade. Thankfully this doesn’t last long. Obviously there is History here, though since I’ve not read the first two books in the series – which will be corrected – I’m starting from scratch. That’s okay, the action up to this point is easy to catch up with and this book isn’t overloaded with attempts to make readers want to read the first two. Immaturity aside, Dax raises himself above a cad by stepping in and trying to obviate Amy’s “I’ve been jilted” distress. A trip to a bar later, and the two are almost back to their usual adult sniping.

When Amy’s alcohol level fires her resolve to turn over a new leaf and catch up on the years she’s missed by sexually being with one man since she was 22, Dax whisks her out of the bar and away from the banker vultures eyeing her. He won’t let her be taken advantage of and when she wakes up at his delightful island home – which I want too – Amy promotes him to frenemy. Until his sister – whom I love – shows up and Dax realizes he’s got a bigger problem on his hands in downplaying things to his mother – whom I also love. Dax’s family are delightful and I love that as much as they can annoy him, he loves them unreservedly.

A week later and Amy is champing at the bit to get back to work but settles for taking Dax with her to see her beloved Blue Jays play. This is hilarious and Dax sees a new Amy before a mix up leads to further hilarity on the jumbotron. Amy now knows that she wants and deserves better than she ever got with Mason-the-Jilter and she makes her move. If Dax doesn’t do serious relationships, why not just use him for sex? The resulting Close Encounters of a Sexual Kind scene makes a few things clear in that Amy was just coasting along in her relationship with her ex-fiancé and we the readers see this is something she needs to work through to be ready for a forever relationship.

That will take some time. Dax doesn’t “do” long term. He keeps from being an ass because he’s honest from the start about that. His reason … well, it’s more hard hitting than the usual “blame it on Mom or some past skanky woman.” He did get a hard kick to get over. It takes him a while to realize he finally is getting over it and thinking in terms of long lasting. The trouble is, he’s done such a marvelous job of convincing Amy of his former intentions and getting her to enjoy her new freedoms. Yeah, the sex is like a nuclear meltdown. Let me just take a moment to say I appreciate that all this time, Amy doesn’t consciously attempt to shift her romantic hopes to Dax. Instead she’s trying to be and have fun being a single woman who is just having sex with Dax.

As the story zips towards the finish line, there is character growth. There is new knowledge. There is also – yeah, this is really needed – the determination to act on all of the former and get to a HEA. When these two say they’ve changed, I believe it. When they agonize over how to move forward and act like “hell yes, I’m going to do this because I can’t not do it because this person makes life better and I want that better” I actually believe it instead of seeing the strings being pulled and feeling manipulated because the book is almost over. The proposal scene is not what I was expecting but wonderful nonetheless and from what each gives the other, I know that they “see” and “know” – in the best sense – who the other is and want a lifetime of it. So thanks Jane for going posting the hot Asian guy cover and thank you for writing this funny, modern story that doesn’t settle for stereotypes or cheap laughs. A-