“Ten-year-old Brunin FitzWarin is an awkward misfit in his own family. As an act of encouragement, his father sends him to be fostered as a knight in the household of Joscelin, Lord of Ludlow. Here he meets the lord’s youngest daughter, Hawise, and a strong friendship is formed.

When Brunin aids his lord in supporting Prince Henry in his battle against King Stephen for the English crown, his own land comes under threat. As the war for the crown and the land rages, Brunin must defeat the shadows of his childhood and put to use all he has learned, confronting his future head on.”

The re release of your novel neatly coincided with my realization that I haven’t read many medievals lately and a reading experience was born. Why haven’t I read more of your books? Maybe because I’m dumb? I dunno but I’ve got to do better and I will, I promise! 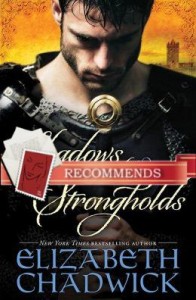 “Shadows and Strongholds” is packed with lots of little details about medieval life – the Shrewsbury Fair with it’s haggling, buying and selling, how young women were trained in healthcare – because you never know when you’re going to have to remove a lance head from your husband, and to be chatelaines – those linens won’t embroider themselves, attending a royal court – if you’re not forced to stay in a tent then you’re doing well but – thank you! – not a mayhap or prithee throughout the book. And what would a medieval be without lots of fighting and slugging it out to gain land and estates? The various ebbs and flows show just how important this was as a means to power and prestige. It gained one allies, strength and protection. One never yielded an inch because to do so would appear weak. The situation of these families – on the Welsh border and during the final years of the civil war – set them up for lots of conflict. I loved the neat touch about how the dispute over Ludlow is settled using something Henry becomes known for – reasoned decisions vs fighting.

The Stephan/Matilda civil war is simmering down during Brunin’s time as a squire and soon action has turned to one of my favorite English monarchs, King Henry II, and his war against the Welsh + his tricky pledges to his English knights to further consolidate his own power. But then times were hard which demanded that the people be harder. Enter Brunin’s grandmother. Lady Mellette is a dragon in female form – a sword sharp tongue in a fiercely proud woman who looks to outlive them all. I’ve run into people like this – whose main pleasure in life is belittling and grinding down others. As someone in the book says, she has the ability and the desire to wound. But she’s also got royal blood – albeit bastard – in an age when this meant something and is a daughter of a noble family that will only rise further though displays of iron will. She’s not weak, as neither are Joscelin’s wife Sybilla and Hawise, because they can’t be anything less.

Ties run deep in the story – both good and bad. Fulk trusts Joscelin to bring out the best in his eldest son and their bonds are strengthened by the marriage – though how can someone own a half share in a castle? The dispute between the various claimants for Ludlow Castle has kept them at each others throats for decades. Watching Brunin learn to be a good squire and knight teaches the reader without ponderous lectures in how it happened. These are men who are tough as leather well into their middle age – still able to fight with sword and lance – and often needing to too. I liked the good descriptions of Brunin while fighting – calm and controlled in battle with everything seeming to slow down in the moment. But there was more to holding a castle or manor than swinging a sword which is shown in the post engagement lessons passed on from Joscelin to Brunin – honor your dead and support the families of your dependents – and in the way Brunin’s younger brother Ralf realizes from watching Brunin all the management details a lord needs to consider in order to hold what is his.

I think one of the reasons I’ve historically shied away from medievals is my perception of the imbalance of male/female power but this book, with its strong women, puts paid to that. Lady Mellette apparently gave her arranged marriage husband hell which contrasts to the strength of the de Dinan and Fitzwarin marriages. Fulk and Eve don’t show romantic love much – theirs seemed to be more a steady relationship based on familiarity though Fulk’s reaction to Eve’s death might belay this. Joscelin and Sybilla show the strength of an arranged and royally ordered union that over the years turns into true love – though tempered with fights and arguments at times. Still, that marriage stands the test of bad times, and good ones. I noticed how Sybilla, who has only given birth to daughters, worries about the prospect of divorce after Louis of France divorces his queen Eleanor for that very reason. Later, Sybilla’s reaction after the king’s decision over Ludlow speaks volumes about her love for Joscelin even if she hadn’t said a word to him. Others might have warned him before he married her that her tongue was sharp and she’d give him all he could take but in her inner steel, he finds his compliment, his consort battleship. Even Fulk, married to beautiful Eve, seems to envy Joscelin at times.

Cecily’s marriage story tells a different tale. She does have respect but no love from her husband who cares more for his dogs and who was thinking of becoming a monk. I idly wondered what would have happened to her if this had happened. As the character arc of one woman shaped up, I was a twinge disappointed when she followed the path I guestimated that she’d probably take. Her ending was well earned though, like Brunin, I felt a little pity for one so weak and idiotic. However, she made her bed and I wasn’t sorry to see her lie in it.

Then comes Brunin and Hawise – from all appearances, we can hope that they will take after her parents. Natural young lust begins to flow into something deeper and more mature as they carefully pick their way through the minefield of their differing way of expressing emotions. But all these people lived so differently than we can imagine – much more publicly with few moments for real privacy. That plus fealty owed his lord and teachings of the Church puts a damper on Brunin’s lusty thoughts before he and Hawise marry. Meanwhile she urges quicker marriage in order to be able to express her feelings and desires. I like that neither starts passionately in love with the other. Instead they are old childhood friends and have no objections to a good, mutual match which flowers under the willingness of each to foster the kind of relationship they’ve watched over the years at Ludlow. It’s give and take, strength matched to injury and the careful nurturing needed to weather the long run. I enjoyed watching them work out their feelings and the beginnings of how this marriage is going to go.

So, a energetic and realistic view of medieval life plus a wide spectrum of differing marriages which show an equal power balance very much to my liking and fighting. Yeah, I’ve been away from your books far too long. A-