I will confess right off the bat that I’m one of those readers who never “got” you. I tried to read Pride and Prejudice years ago, but gave up after a few pages because of your writing style. What can I say – I had less patience in those days with long, indirect sentences which seemed to use 20 words to say what could be easily said in five (hah! I’m one to talk on that score…). I read Emma a few years ago and honestly did not care for it. It wasn’t so much the language this time; it was the fact that there seemed to be about a dozen main characters and only one of them (Mr. Knightley, of course) appeared to not be a complete and utter twit. Emma herself was dumber than a bag of hammers, and every other character seemed to fall somewhere on the continuum between “moron” and “get any stupider and we’ll need to water you twice a week” (to paraphrase the late, great Molly Ivins). 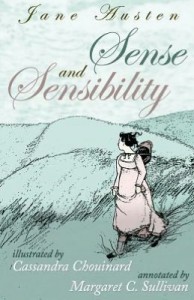 I don’t really like reading about stupid people, so Emma frustrated me. Nonetheless, I picked up a copy of Sense and Sensibility recently, and though I started reading with some trepidation I soon found myself enchanted with the writing and the characters (though many of them are hardly any sharper than those found in Emma).

Sense and Sensibility, for those readers who don’t know, is the story of Elinor and Marianne Dashwood, sisters who encounter many obstacles on the path to true love. As with Pride and Prejudice, the title Sense and Sensibility is significant. Elinor, the older of the sisters, is ruled by sense – she is not given to great shows of emotion or passion, whereas Marianne, who to be fair is only about 17 during the time the story takes place, thrives on drama and grand expressions of emotion. Elinor is by far the more sympathetic of the sisters for most of the book, though some readers may, I suppose, find her coolness and perfection a bit off-putting. I found her very sympathetic, since as the reader we’re privy to her inner thoughts and realize how hard it is for her to maintain her calm facade at times.

The story opens with the death of Mr. Henry Dashwood, Elinor and Marianne’s father. Soon, their half-brother and his rapacious wife descend on Norland Park, the family’s estate, and take over the place. Mr. Dashwood had hoped to provide well for his second wife and their three daughters (Elinor and Marianne have a younger sister, Margaret), being that his son John was already wealthy from an inheritance from his late mother, as well as from having made a good marriage. But the estate had been passed down to Mr. Dashwood in such a way that he was unable to leave it to anyone but his son John, and so as an alternative he asked John on his deathbed to look after the interests of his stepmother and sisters. This leads to a rather hilarious conversation between John and his wife, in which they gradually whittle down the meaning of the promise John has made:

“Perhaps, then, it would be better for all parties if the sum were diminished one half. Five hundred pounds would be a prodigious increase to their fortunes!”

“Oh! beyond anything great! What brother on earth would do half so much for his sisters, even if really his sisters! And as it is — only half blood! — But you have such a generous spirit!”

Soon they have decided that this “generous spirit” only requires them to help the ladies find a suitable place to move to, and nothing more. In Mrs. John Dashwood’s opinion, the move cannot come too soon, for she is concerned about the connection forming between Elinor and her brother, Edward Ferrars, who is a frequent visitor at Norland. Mr. Ferrars is the eldest son of a wealthy family and his sister and mother have big plans for him that don’t include a quiet, modest non-entity such as Elinor.

Marianne also disapproves of the growing affection between Elinor and Edward, for entirely different reasons: she sees Edward Ferrars as too boring and passionless and cannot understand the attraction that Elinor feels for him. Marianne is not just set on being emotional and dramatic herself; she dislikes and distrusts anyone who does not wear his heart on his sleeve.

Soon the widow Dashwood and her daughters receive an offer from a distant relative for a situation in Devonshire: a comfortable and affordable cottage near the relative’s estate. They leave Norland with some regret (it has been their home for quite a while, after all) and embark on their new life.

Once settled in Devonshire, the Dashwood sisters meet a veritable host of new people, many of them very amusing (your gift for satire really shines in these characterizations, I think): Sir John Middleton, their jolly but rather silly benefactor; his wife, who thinks of nothing but her children, and Mrs. Jennings, the wife’s mother, vulgar and gossipy but with an unexpected heart of gold. They also meet several eligible gentlemen: Colonel Brandon, a friend of Middleton’s who takes an interest in Marianne (an interest not returned because she finds him to be even more of a dry stick than Edward Ferrars) and John Willoughby, a dashing young man who does attract Marianne’s notice.

There’s a lot going on in the plot of Sense and Sensibility; I haven’t even mentioned several major and minor characters (my favorite of which are probably Mr. and Mrs. Palmer, Lady Middleton’s sister and brother-in-law – he is gruff to the point of rudeness, a quality that his silly wife seems to delight in, insisting that he is “droll”). Nor have I really managed to dig very deeply into the plot. Suffice to say that there are a number of twists and turns to Elinor’s and Marianne’s romances; the story eventually moves to London and both sisters suffer a fair amount of heartache before each finds her Mr. Right.

I liked pretty much everything about Sense and Sensibility: the plot, which is intricate without being too convoluted (there are some unlikely coincidences of the sort that make the reader think that there must have only been a few dozen people in Regency England, but I can handle coincidences pretty well in a well written book – what might be unbelievable in a bad book feels symmetrical to me in a good one), the characters, several of whom have unexpected depth – even some of the villains are not entirely without nuance, and the writing, which is the very definition of droll (unlike Mr. Palmer). I loved this bit about Edward Ferrars’ controlling mother, who briefly disowns him:

In spite of his being allowed once more to live, however, he did not feel the continuance of his existence secure, till he had revealed his present engagement; for the publication of that circumstance, he feared might give a sudden turn to his constitution, and carry him off as rapidly as before.

If I have any quibbles or criticisms of the book, it would be a slight sense of apprehension over the resolution of one of the romances (I don’t want to say more for fear of spoiling anyone – one of the pleasures of the book for me is that I didn’t know who would end up with who) and an occasional difficulty with the old-fashioned writing, which did feature the same long, indirect sentences that I tended to get lost in and have to reread to understand. Still, I feel such a sense of triumph and pleasure at being able to say that I am an official “Jane Austen fan”. I wonder which of your novels I should pick up next? I feel like I should try Pride and Prejudice again, but I know the story so well from film adaptions that I don’t feel as much of a sense of urgency. I’ve been warned away from Northanger Abbey, which doesn’t seem to be a favorite of even die-hard Austen fans. I’m thinking of either Mansfield Park or Persuasion. In any case, I am eagerly looking forward to reading your works again – no more trepidation for me.

This book is in the public domain.   Grab a free copy.