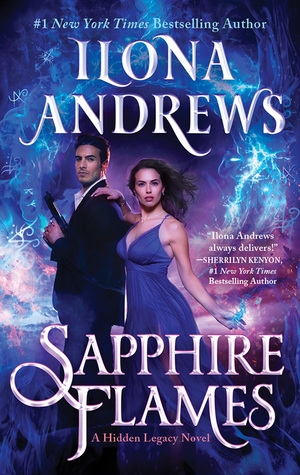 Like so many romance readers I know, I’ve been hanging out for Sapphire Flames. I loved Nevada and Rogan’s story (the latter two books in particular were excellent) and enjoyed the “bridge” novella Diamond Fire but ever since the magic trials, Alessandro and Catalina have intrigued. To finally see them together as adults (Catalina is now 21) was very exciting.

Catalina’s trilogy starts with the same pattern as Nevada’s and by that I mean that there is no HEA/HFN here. For you I will do a cliffhanger. I don’t love it (I’m definitely #TeamHEA) but for you I will do it. That said, Sapphire Flames worked better for me than Burn for Me, partly because I knew what to expect endingwise and partly because Alessandro was more to my taste than early Rogan.

Sapphire Flames picks up three years after Wildfire.  Happily married, Nevada and Rogan are in Spain attending a family funeral (distant family so I gather they’re not particularly bereaved but family politics requires them to be there), which neatly removes them (and their considerable magic) from the field for the duration of the book. Catalina is now head of House Baylor in circumstances which are explained later in the novel and the grace period for their House is about to expire.  After that it will be open season on House Baylor. Many (most) new Houses don’t make it. Catalina is determined that won’t be the case for hers.

I admit I was a little unclear about the interaction between House Rogan and House Baylor. Given the tie of marriage it seemed to me that there would be not only the perception but the actuality of an alliance between them. I mean, nobody would seriously think Rogan wouldn’t ride to the rescue if needed would they? I understand the family desire House Baylor to stand on it’s own and not accept money from Rogan however. Also, they do not wish to be a vassal to any House. That makes sense too.

As the story begins, Augustine Montgomery comes to Catalina asking for her help. Ragnar Etterson, a 15-year-old Prime Venenata (poisons) is on the rooftop of a city hospital, threatening to commit suicide. Ragnar is the younger brother of Runa, the Venenata Prime who purified Nevada’s wedding cake after it was poisoned in Diamond Fire. Runa had come to Augustine for help after her mother and sister were murdered. Ragnar is not coping with their loss at all and Runa is only just keeping it together. Augustine does not wish to get involved in Runa’s case – it is too dangerous he says, but he does feel sufficiently sorry for Runa and Ragnar to ask for Catalina’s help to get Ragnar safely off the roof. As a Siren, Catalina can do what probably no-one else can and given her love for her own family and her previous association with Runa, there is really  no doubt she will try and help.

As it happens, Catalina does more than that; pretty soon she is offering the services of Baylor Investigations to look into the murders. Everybody tells her it is ridiculously dangerous and, with the grace period about to expire, not at all the way to stay “under the radar” but Baylors are loyal to their friends and they do not forget those who have helped them.

Apart from brief appearances from Augustine, there are other familiar characters who pop up too. I was delighted that Bug is still around. Of course, when Catalina asks for Bug’s help she has to negotiate with him to keep his mouth shut (Bug is really really bad at keeping secrets). It does lead to one of the lines which had me snort-laughing as I read though.

He can’t tell Nevada. I’ll explain it to her myself, tomorrow morning. Can you do that?”

As Catalina investigates the Etterson murder, another familiar face suddenly appears; Alessandro Sagredo, the Antistasi Prime (magic nullifier) who was pitted against Catalina at her magic trial. Catalina has had a crush on Alessandro ever since (and her family have a lot of fun at her expense about it too) but she thinks they could never have a relationship she could trust because her magic makes people love her. She wants to be loved for herself not because she interfered with someone’s mind. Which, you know, fair. When Catalina and Alessandro first met she was too young for anything anyway but she’s 21 now so that’s no longer a barrier. Catalina has followed Alessandro on Instagram all this time. He’s a playboy who’s been engaged no less than three times but never married. He lives a life of apparent idleness and pleasure. She thinks he’s wasting his talents but loves to look at him.

It should come as no surprise that appearances here are deceiving. There’s far more to Alessandro than a pretty face. And, when he turns up wielding weapons with improbable skill, Catalina begins to adjust her views.

Alessandro deliberately gets in the way of Catalina’s investigation. Repeatedly. She’s less than impressed. Alessandro however has his own agenda and when it comes to Catalina it involves keeping her safe – he thinks she’s in over her head with this case and should leave it alone.

Alessandro is handsome, charming, urbane and deadly in all the ways. To protect herself from his charms Catalina arms herself with sarcasm. There are delightful back-and-forths between them throughout most of the book. It is clear that they actually like each other and readers can tell from the beginning that Alessandro has deep feelings for Catalina whatever she thinks about it, so it never crosses the line into mean or dubious. Instead, there are just plenty of zingers which illustrate their chemistry and connection.

“The part where you keep interfering with my investigation and shooting people I need to interrogate.”

“Interrogate? I must not understand the meaning of that word, because from where I’m sitting, you blunder around asking people questions until they try to kill you.”

Catalina tries hard to resist Alessandro but he is everything she desires and he’s a charming rogue. She finds herself tripping over her words a bit in her attempts which adds another level of humour to the book.

“God, you are an asshole.” It just kind of came out.

Alessandro drew back. “Such a dirty mouth. Oh, the possibilities.”

He laughed. He laughed at me.

Catalina is always relatable and she gives as good as she gets too. When Linus Duncan (who also has a pivotal role in the book) and Alessandro are in the same space, Catalina has to play umpire and it’s pretty funny.

The humour and the snappy banter between the would-be lovebirds are circuit breakers for readers as the tension, danger and risk ratchets up and up until the book’s finale. This is a PNR/UF so I expected a lot of violence, murder and mayhem. Sapphire Flames is action-packed and the story  moves forward at a cracking pace.

As I was reading, one of the things which occurred to me was how cleverly you’ve designed Catalina’s magic. She is super-powerful but her magic has a built-in weakness; if she beguiles someone strongly, they will soon love her so much they will want to tear her apart. She’s studied fighting and weapons but she she doesn’t have superhuman fighting abilities. Her magic carries risk, particularly when she’s alone. It means she has to be judicious about its use and it builds the tension even further.

In terms of the romance, I think the relationship between Alessandro and Catalina is further along at the end of this book when compared to Nevada and Rogan at the end of Burn for Me (which is another reason I enjoyed this book more I expect) so there’s more in it for the romance reader. Also, Alessandro doesn’t kidnap Catalina like Rogan did Nevada so he’s already ahead of the game there.

By the end of the book Catalina has solved the crime but a whole other arc has been set up. Alessandro’s reasons for almost everything are pretty much a mystery and I’m desperately curious about him. He’s not a mystery. I felt like I knew the core of the character but there’s so much of the why that is unknown. My friends who have read the book already and I are madly speculating in our DMs. The identity of “Caesar” is still unknown – I also have speculation about this. I wonder whether it will be revealed in this trilogy or if you will save it for Arabella’s? So many delicious questions!

There were a few things I was a little confused about in the book. I won’t go into them here because they’re a bit spoilery but there were conclusions that Catalina (correctly) jumped to which surprised me. In a couple of cases the breadcrumbs in the story weren’t enough for me to get it, even after the reveal. I’d be “Oh? why did you think that? How did you get there?” She was right – that much was soon clear but I admit I was a little baffled as to the how a couple of times. Nothing huge, just a couple of little things.

I was delighted about developments for some of the other characters but I won’t say more here. I was so excited though!! I had heart eyes.

I loved Sapphire Flames, it’s tightly-plotted, full of action, romance and humor. I now I can’t wait for what’s next.