REVIEW: Run to You by Charlotte Stein

I see what you did there! 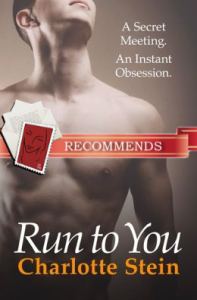 Curiosity about her absent friend Lucy drives Alissa to spy on an mysterious “assignation” in the most intimidating hotel she’s ever seen, full of women so classy, she can’t even breathe next to them:  “If I inhale her perfume I might die of wealth.” But the most intimidating thing in the hotel is a man she stumbles into, a large, intense man who’s Hugo Boss handsome, except not quite:

As though he maybe models for some obscure Eastern European equivalent of that scent — Hurgo Bsosch maybe. It’s there in the heavy-lidded look in his eyes, and the softness of his mouth. He doesn’t have a grim slacsh, of the kind that seems so popular these days.

He has a sensuous mouth, a decadent mouth, a mouth you want to plunge into and swim around in.

I’m amazed he even remembers our conversation, in-between million-pound meetings and making himself so slick and flawless. The suit alone must take a thousand years to put on, with all its buttons and extra bits and the always imminent threat of ruining something so expensive. I bet he has to lever it on with tweezers. I bet geishas roll it onto his body using their breasts.

‘Now tell me what you want to happen next.’

‘Of course it’s fair. If you want something, you have to ask.’ He walks around me again, only this time it’s more like pacing. It’s more like prowling. ‘I did say that you couldn’t expect me to do all the work. You have to offer me something at least, and really I’m requiring so little. Am I not?’

The answer is yes, obviously. Yes, you’re requiring so little. Words are barely anything when you really boil them down, and I know I could compress them even further. I could mash ‘fuck’ together with ‘me’ and he’d understand.

So why am I floundering? It’s simple, really.

There, I think. There.

And just as I do he strikes me down.

‘Liar,’ he says, like a fist rapping against glass.

A little harder and it will break.

A little gentler and everything will stay the same.

“Then perhaps we should play another little game,’ he says, in a way that suggests it isn’t going to be little, and it isn’t going to be a game. People don’t brace themselves over little games – but that’s what I’m doing. I’ve stiffened my shoulders and tightened my hands into fists, and when he finally speaks I close my eyes. It seems better to close my eyes for something like this: ‘If you tell me a lie about your desires and I catch you, you then have to do whatever it is you tried to conceal from me.’

‘And how would you go about catching me?’ I ask, in some vain attempt at injecting some bravado into this. I already know it’s the wrong thing to say, however. The second I speak that word aloud, my mind starts picturing him chasing me down hallways. In some of the scenarios he has giant metal hands or a big chainmail net, but in all of them I’m exactly the same way. I’m panicking and stumbling and completely unable to escape.

He’ll have no trouble, I think.

And apparently, we’re of one mind on this.

‘I don’t believe it will be so very difficult.’

‘I could lie about lying. I could tell you it isn’t true no matter how hard you pressed me, and then what would happen?’

‘Then the game comes apart.’ He picks at lint that isn’t there, somewhere around his right knee. ‘Though I trust that you won’t let that happen. No matter what you say, I think you like it when I guess.’

And then I’ll have to do it.

The emphasis here is almost entirely on what’s happening internally, on the power of breaking down defenses, and the relief and release that comes from having those defenses broken down. Alissa embraces the thrill of being as filthy as she wants to be in scenes that are filled with heat and ferocious longing and unexpected tenderness — for both of them. There is some mild bondage with handcuffs and a brief mention of a safeword — which leads to the most stunning use of the safeword concept I’ve seen outside of Tiffany Reisz’s The Siren. That moment was like being hit with a lightning bolt.

Perhaps it was inevitable that everything after that would be something of a let down. The last quarter of the book is focused largely on Alissa’s insecurities and issues around trying to turn these sexual encounters into an actual relationship, and I thought it sagged a bit. It’s not that I’m disappointed with the romantic aspects of the story, but the narrative lost its intimate focus on Alissa and Janos together and no longer unfolded as naturally; time spent with another character — the missing Lucy — seemed wasted to me. Still, how much do I love a book that gives you everything you’d want in the powerful billionaire boyfriend story, without seeming tired, derivative, or incredibly creepy? An A- and a recommendation, that’s how much.