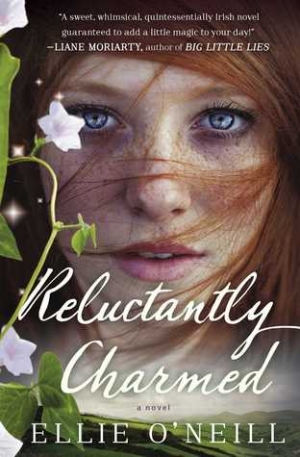 I’ve been reading a lot of science fiction and fantasy lately, and the overall tone of the genre over the last few years has become steadily darker. And that’s great for those who like that. I even like it from time to time. But I really like books that are a bit more even-handed, a bit like real life. Your debut novel was very much like that. Even with some unreal happens going on in the background you made all of the characters real people reacting to those things. And it kept a smile on my face for much of the book.

I loved the main character, Kate McDaid. A young woman working for a marketing firm in Dublin, she’s concerned with many of the things the rest of us are, the ups and downs of her job, finding a special someone (especially the sexy lead singer of a local rock band), what to eat, what to wear, how to pay for things. On her 26th birthday, she finds out her great great etc aunt also named Kate McDaid left her an inheritance. All she has to do to claim it is publish a letter and seven poems called the Seven Steps. The only thing is, her aunt seemed a little batty, because the letter is about her relationship to fairies and the Seven Steps are instructions for reconnecting their world with ours.

Kate thinks it’s harmless and a bit funny, so she gets some space on an old website for that sexy singer’s band, since no one visits the site anyway, and she puts up the letter and the first step, thinking no one will notice. And they don’t, until the singer sees the possibility of publicity and writes a song about it, and a celebrity in the US commits suicide, seemingly referenced by one of the steps.

As every new step is posted, one per week, the attention grows and what seemed light-hearted feels darker and more confusing for Kate. People she knows change on her with her fame, and she doesn’t know how to live with it or who to trust. She’s finding a lot of things aren’t what they seemed, and nothing’s as easy to navigate as she thought it would be. But Kate is quite level-headed, and I love how she reacted with heart and head to all the situations in the book.

In so many books I’ll watch a main character and cringe at their stupidity, thinking no one would do that. But with Kate I was identifying with her every step of the way, even when she did dumb things because I understood why and knew I’d likely try that too. She is so very human to me, and that’s why even during bad situations I was smiling, because it was so damned real and I got her.

It couldn’t have been that way unless you wrote all of the side characters that way as well. All these Irish people, and not one stupid stereotype in sight. I almost wept for joy. Each character, down to the those with single appearances, had something about them that was unique. Even the nastier people were understandable and not caricatures.

All of that made the book unpredictable. I’ve read a lot of fantasy, and it’s pretty easy to guess where most books are going. I had no idea with this one. Well, I guessed some options. But you kept them all open until you got there. That was really well done.

If there is a weakness to the book, I’d have to say it was the ending. Don’t get me wrong, I liked the way it ended. It was a perfect choice. But the whole thing felt a little rushed. I’d like to have seen more aftermath. I got the feeling you might be thinking about writing another book in that universe, so I’ll be happy to read it there. But other people might want all of that in one book.

Regarding romance, I liked that you included some both good and bad. It’s not the main point of the story, but the main point is Kate discovering what’s important in her life, and that includes the kind of person she wants to love. The book really did make me think about what my choices would be since I was in there with her every step of the way. I do think you needed a little more face time for the second couple, which goes back to my wish that the aftermath would have been deeper.

Regarding the fantasy aspect of the story, I liked that it actually remains in the background for the most part. What is important is how we see it and why we want it, and how our lives can be magical because of what we choose. This was a very satisfying read for me, and I’m looking forward to your next book. This is on the cusp of B+/A- for me, but I’m so happy I read it I’ll go with A-.

Jan,
who is a writer, mostly of fan-fic, but who wouldn’t publish it even if you offered her all the money from 50 Shades of Gray. Probably.