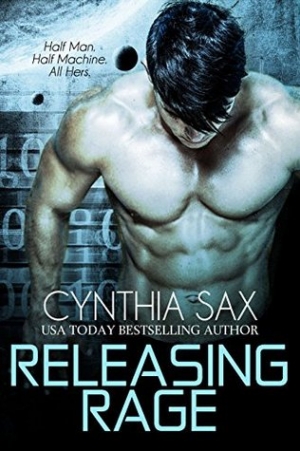 First, let me be very clear:

I’ve been a fan of yours since I read Breaking All the Rules and I haven’t looked back since—I’ve consumed all the terrific books you’ve written with Avon Impulse Red, eagerly awaiting that next premise that would bring me back for more. So when I saw on Twitter you were self-publishing an erotic cyborg romance (my fav-or-ite sub, sub, subgenre), I’m telling you, I couldn’t one click that puppy fast enough. Also, to be truthful, I’m turned off by a lot of the self-pubbed SFR out there due to the cheese factor of the covers, but your covers for this series are hot, hot, hot and very professional-looking. Thank you for this.

Half Man. Half Machine. All Hers.

Rage, the Humanoid Alliance’s most primitive cyborg, has two goals-kill all of the humans on his battle station and escape to the Homeland. The warrior has seen the darkness in others and in himself. He believes that’s all he’s been programmed to experience.

Until he meets Joan.

Joan, the battle station’s first female engineer, has one goal-survive long enough to help the big sexy cyborg plotting to kill her. Rage might not trust her but he wants her. She sees the passion in his eyes, the caring in his battle-worn hands, the gruff emotion in his voice.

When Joan survives the unthinkable, Rage’s priorities are tested. Is there enough room in this cyborg’s heart for both love and revenge?

I read Releasing Rage quickly, loving everything about it. I finished it and immediately started a reread. I liked it that much.

Rage is a gray-skinned, battle-hardened, scarred, primitive C model cyborg. He has been treated terribly over the years by his captors, raped and tortured and taught to detest humans. Joan is assigned as his cybernetic engineer by the eeeevil Commander who assumes C899321 will conveniently turn Joan into a pile of goo as Rage did with his previous engineer. But Joan, who adores her C Model the moment she lays eyes on him, becomes Rage’s caretaker and his only human ally.

This book has that same tone of grittiness I remember from back in the day when I read Ender’s Game—the eat or be eaten mentality between the heroine and her peers in a battle station/training setting, with the front lines imminent. Rage is a super soldier, sent to fight aliens I assume are similar to the ones in the movie Live, Die, Repeat. I like Joan. She’s brave, caring and ethical and loves her cyborg more than life itself. At times I thought the all-out hatred the other men had for Joan was a bit OTT and too easily explained by “she’s a woman”, maybe the addition of some other compelling reason for the murderous hatred of her peers would have been a nice icing on the cake, but not essential. Joan is tough, she fights back. She’s not a screaming, reactionary heroine who only exists in the story as a female to be saved. I liked that.

The best part of this book is the first half. The initial scenes between Joan and her C Model as they negotiate their relationship are exquisite. Rage learns to trust Joan and falls in love with her, all the while amazed to find a human who treats him as sentient. Erotic romance is at its best when the sex is emotionally intense and an integral part of the story used to create intimacy between the couple, and this story certainly delivers in this regard. Joan is sweetly submissive to her dominate, possessive cyborg—I really liked how this is portrayed as a loving gift on her part, and how the hero is constantly shown to have respect for her mind and bravery, this allowed me to accept Joan’s submission without feeling she was being demeaned in any way. These are two people who have both suffered loss, rejection, torture and who, when they find love and family, are transformed by this miraculous gift.

Also, I was thrilled with how the HEA was neatly tied up with a bow. If I were judging, I’d give it a 10.0, because you totally stuck that landing. I really enjoyed this story, is had a nice balance of fresh plot, characterization, romance and hawt sex. Readers—Buy it, buy it now!

Psst. Dear Readers, before you switch over to one click—can we talk about the rape scene in Releasing Rage at 60%? As you can tell, I loved this book, but I think it’s important for you to know about this up front prior to purchase to see if this is your cuppa, or something you should avoid. I would hate to see a book mismatched with the wrong reader. My kindred spirit and fellow erotic romance lover, Melissa K, didn’t care for this book, she dnf’d. The rape scene and Rage’s subsequent caretaking of the heroine repulsed her. Meanwhile, for me, the scene didn’t push my Oh hell, no buttons like it did for her. The rape was off-page, and I viewed Rage’s actions afterwards as loving and sexy. But let’s remember I’m the person who annually rereads Heat by R Lee Smith and enjoys dark romance, so my objectivity might be blown in this situation. It helped that the heroine was unconscious for most of her torture so she didn’t remember being violated. But yes, this book is violent. Lots of blood, killing and bodily fluids. This is definitely a dark romance, not for the squeamish.

I liked Releasing Rage so much, I preordered the next book in the series, Breathing Vapor and read it soon after it was released. Unfortunately, the RR magic wasn’t there for me in the second book. There were still good moments. Good action. Sexy cyborgs. An interesting plot. Another curvy female who isn’t a twig. This is good. But I was disappointed with the lack of connection between the two books. None of these characters were in the first book and vice versa. You do warn the reader of this, letting us know this is a STANDALONE book, so since I was prewarned this shouldn’t bug me, right? No, still bugs. I wanted to hear more about the previous characters and see how these new characters plugged into that world. Also, the sex in Breathing Vapor wasn’t as emotionally intense and essential to the building of the relationship between the H/h as it was in Releasing Rage. And the ending of Breathing Vapor was a little loose for me, leaving a thread untied, and since I’m assuming these characters will not be revisited later, that was disappointing. I liked Breathing Vapor, but I didn’t love it the way I did Releasing Rage.

But, despite any quibbles I had with the second book, I plan on continuing with this series. I’m so whipped, I signed up for your newsletter to get the exclusive Being Green story (which was darling) and I’ve already preordered Crash and Burn which releases in February.