When Jane contacted me and said that there was a new book coming out with an underground fighter hero, I immediately requested the book. I love fighters, and the high stakes physicality of them. Your new book, Real, features Remington Tate, a disgraced boxer, who now is fighting on the Underground circuit, seeking the championship. Brooke Dumas is a former champion runner. During her training for the Olympic trials, Brooke blows out her ACL for the second time in six years, and must come to terms with the fact that her dreams need to change. She decides to  get her Masters degree in Sports Rehabilitation.

One night, Brooke and her best friend Melanie end up at the Underground to watch Remington “Riptide” Tate fight. From the moment Brooke sees Remy, she’s drowning in him. They have a magnetic connection that begins the moment they make eye contact.

Remy! Remy! Mel shouts hysterically at my side, hands cupped to her mouth. “You’re so fucking hot, Remy!”

His head angles to the sound, one dimple showing with a sexy smile as he faces us. A frisson of nervous energy passes through me, not because he’s extremely gorgeous from this perfect view – because he is, he definitely is, goodness, he really is – but mostly because he’s looking straight at me.

One eyebrow cocks, and there’s a glimmer of amusement in his entrancing blue eyes. Also something warm in his gaze. Like he thinks I’m the one who shouted. Oh, shit.

He winks at me, and I’m stunned as his smile slowly fades, morphing into one that’s unbearably intimate.

My sex clenches tight, and I hate that he seems to know it. -Kindle location 68 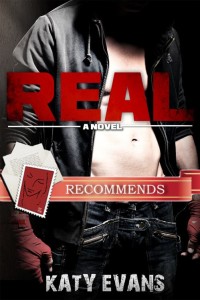 Remy finishes fighting and approaches Brooke, still sweaty from the match. He gets her name and number (helpfully provided by her best friend), and sends her tickets and a backstage pass for the next night’s fight. Brooke is horrified. She’s not a one-night stand girl, but is beyond tempted by this deep attraction she feels for Remy. She decides that she’ll do it, so when he calls her back stage after the fight and offers her a three month contract to travel with him as his sports rehab/physical therapist she’s shocked. Perhaps she misinterpreted their connection. She can barely stand upright in his presence and apparently he’s only interested in her stretching him out after a fight.

Once Brooke accepts the job, she’s with Remy all the time. She’s required to stretch him out while he trains, after her trains and before and after fighting. Just touching him is torture for Brooke. She’s ridiculously attracted to him. She knows Remy is interested, but he makes no moves towards her. Brooke is completely confounded by his unwillingness to go there with her. Particularly because she knows that his coach and PA routinely arrange for Remy to have girls before or after a fight. Remy turns all the girls away after he meets Brooke. But he won’t touch her either.

Remy is a complicated guy. His parents had him institutionalized when he was 13, and it wasn’t until he was old enough to check himself out that he escaped. He has a diagnosis of bipolar disorder, but refuses to take medication for it due to the effect it has on his training. This makes him unpredictable. He’s either very, very high or goes “black”. His eyes change to a deeper color when he’s in a depressed state, and he often loses the time, unaware of his actions when he’s on a low. He can be very violent during those times and his coach and personal assistant have been sedating him to get him through the times. Brooke is unprepared for Remy’s lows, but is confident that he wouldn’t hurt her. So she spends time with him while he’s low, and continues to try to support him. For his part, Remy refuses to become further involved with Brooke (sexually) because he’s afraid he’ll hurt her. But she truly does soothe him with her presence and when he touches her, it helps him stay grounded. They begin a very, very hot not-entirely-sexual relationship.

Brooke is frustrated that Remy will not consummate their relationship. They’re doing a lot of kissing but never having sex, and it’s becoming  all she can think about. She wants him desperately, and touching him in a purely professional way is no longer a possibility. Every touch is intimate to her, even when she’s just stretching him out. But Remy is resolved, Brooke needs to know the “real” him before they can go all the way. He knows once he has her completely, he’ll never let her go.

I charge forward and slam my fists repeatedly into his chest, as hard as I can without breaking my own bones. “Why haven’t you touched me? Why don’t you fucking take me? Am I too fat? Too plain? Do you just delight in fucking torturing me senseless or are you just plain damn mean? For your information, I’ve wanted to have sex with you since the day I went into your stupid hotel room and got hired instead!”

He grabs my wrists and angrily yanks me forward, pinning my arms down. “Why’d you want to have sex with me? To have a fucking adventure? What was I supposed to be? Your one-night-fucking stand? I’m every woman’s adventure, damn you, and I don’t want to be yours. I was to be your fucking REAL. You get that? If I fuck you, I want you to belong to me. To be mine. I want you to give yourself to me – not Riptide!” – Kindle location 2180

I loved this book. As in, I couldn’t stop talking about it. I found Remington to be well nuanced, despite the book being told solely from Brooke’s point of view. I enjoyed the angsty-ness of the book. What I’m unclear about is how well or accurately Remy’s bipolar disorder is portrayed. I know very little about bipolar disorder, so I’m not sure whether his choice to be off medication and the ramifications of that were well portrayed or not. As someone who knows very little about the disorder, it read credibly to me, and his actions seemed to be within the parameters of what I’ve heard about the illness. I really liked Brooke and thought that she was a strong match for Remy. She’s tough and no-nonsense, but also very girly and young.

What I liked best about this book was the sexual tension and chemistry between the two leads. The book is extremely hot, without actually giving all that much away. The sex scenes, once they finally occur, are beautifully written, well choreographed and placed within the story to enhance the couple’s emotional journey. Prior to them having sex, the tension between them is palpable enough for me to be shrieking in my head “For God’s sake, just do it! Please *just* do it!”

Real does not read like a debut author wrote it at all. It’s very well edited, and professionally presented. I understand that there will be two more books featuring this couple, one told from Remy’s point of view. While I thought that the book ended in a good place, I was happy to hear that we’ll have the opportunity to revisit the couple. Overall, Real was a wonderfully angsty, well written “mature new-adult” book. It gets a confident and happy recommendation from me. Final grade: A-