I knew by the end of chapter one, that this book would be one I would remember for a long time. In just that first chapter a well of emotion swelled up and closed the passage of my throat such that each subsequent page read triggered feeling. “Come on baby, make it hurt so good. Sometimes love don’t feel like it should. You make it hurt so good” sings, John Cougar Mellancamp. 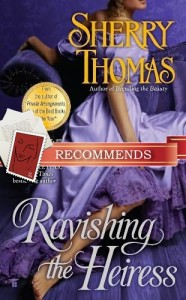 Milly is the only daughter of a very wealthy merchant. He has bought her the Earl of Fitzhugh, an old man at age thirty-three to Millie’s tender sixteen. Only the Earl dies to be replaced by his heir, Lord Fitzhugh. Upon her first sight of Fitz, young Millie falls in love. 16 and saved from marriage to an aging lord, Fitz is like a gift from God, with his golden hair and beautiful visage. Millie’s delight is turned to secret dismay when Fitz confronts her and suggests that this is not a path that they both have to follow.

Fitz had not planned on being Earl of Fitzhugh. He has his own love, Isabelle, and is devastated to learn of his inheritance, such that it is. The title and the lands are in desperate need of an infusion of cash and he can only save his title and his family by marrying Millie.

Pride compels Millie to tell Fitz that she too has a love whom she can’t be with. We all know she refers to Fitz whose heart belongs to another, but Fitz believes that it is another man. Together they agree on a marriage based on friendship, not physicality. Millie is very young, after all, and Fitz and she agree that they’ll have no physical relations for eight years. But Fitz does not give up his passion for Isabelle easily. Through a series of flashbacks we see the pain Fitz suffers upon hearing of Isabelle’s marriage to another. Then the birth of her first child. It would seem that Fitz’s life had come to an end with these news.

Millie serves as his most stalwart companion, consoling him as much as she is allowed. Sometimes Fitz realizes that Millie must have these same feelings for her unrequited love, but she is so self contained that none of it leaks out. He marvels at her ability to cope although it must be noted that Fitz is a somewhat selfish person, concerning himself with only his own losses and his own emotions because if he wasn’t perhaps he would have question Millie’s stoicness.

Millie is a burning container of passion, as much a romantic and full of deep emotion as Fitz, but she suppresses it all. It’s virtually unbearable to read the scenes where she sits calmly discussing Fitz’s various mistresses, women he slakes his physical pleasure with, knowing that she loves him.

When the news of Isabelle’s return to England, Fitz tells Millie that he intends to set up a household with Isabelle and her two children. Millie gives her blessing. Millie’s deep love for Fitz means that she accepts the pain, but also wants him happy. I’m dying for Millie. Because Millie is so suppressed, her emotions written in such a understated way, I, as the reader, am compelled to feel them more largely. Every word Fitz seems to utter is a dart in my heart, not just Millie’s.

The anniversary of their 8 year promise is upon them and Fitz requires that they embark on a six month physical journey so that Millie can hope to be impregnated before he leaves her to be with Isabelle. When Millie shudders with joy at his touch, Fitz reads this as revulsion, thinking she must want to be with her love like he wants to be with his.

While I am not a fan of flashbacks in most books, I think it was almost necessary in this one. The flashbacks are painful and in order to make the book bearable, those painful moments must be interrupted by hopeful ones. So where is the hope? This is a romance story about Fitz and Millie. It is one of the most true friends to lovers stories one will read. From the very beginning, we are shown the deep regard Fitz has toward Millie. In the opening scene, during the discussion about Isabelle’s return, Millie oversalts her eggs and leaves the table with her breakfast untouched. Fitz notices this immediately and becomes concerned because “As unthinkable as it had been eight years ago, they’d become good friends. And friends watched out for one another.”

I did wonder at Fitz’s myopia. It was like he lived in a dream state until Isabelle returned and the real world intruded. The real world was one where Fitz loved Millie too only he didn’t realize it. The longing he had for Isabelle was wrapped up in the nostalgia of youth – that innocent and free time before Fitz had to become an adult. The adult Fitz, the one with responsibilities, doesn’t quite understand Isabelle’s headstrong nature, her fearlessness of scandal, her lack of care for her children’s future in the world. He can’t help comparing her, often unfavorably with Millie. The adult Fitz knows he cares deeply about Millie and does not want to see her hurt in any fashion or humiliated. Fitz has to balance what he perceives as the culmination of all his wants and hopes and dreams with the rightness of his reality.

I also, at times, wondered at Millie’s long suffering nature. What else could she do though? She wasn’t able to stop loving him although at times she wanted to. Yet, she took everything without a drop of reproach and I would have liked to have seen some rejection of his antics at some point in the book. Perhaps it wasn’t in her nature to do so, but when does a long suffering love turn bitter?

I was so deeply invested in Millie’s happiness from the first pages. The pain and angst is made all the more delicious by the payoff. I do wonder, though, whether a Thomas book can be written without flashbacks. A-