Many moons ago, when Smart Bitches, Trashy Books hosted a bookchat for this book. I finished it a mere two hours beforehand, but I was so glad I did.   The chat was amazing, but more so was the actual book.   The bitchery and I discussed so many excellent topics for about it for a good hour before you made your guest appearance.   From feminism to child abuse to sexuality, you tackle so many issues of reality effortlessly in a paranormal novel.   Readers will be surprised by what is lurking within these pages. 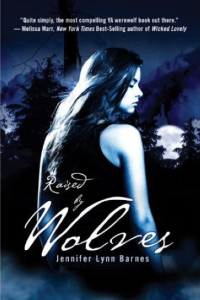 When she was four years old, Bronwyn watched as her parents were brutally murdered by a rogue werewolf known as a Stray.   She was taken in by a local alpha werewolf – the good kind – named Callum, and was raised up as a teenager among wolves.   Bryn has never become a werewolf, but has always been a little faster and had better senses than anyone else around her.   Her life has been under the patriarchal rule of the pack, and her humanity has been one of the few things keeping her sanity in check.   Bryn could only imagine what it would be like to be under the pack mentality.

The pack has been on edge lately, neglecting to let Bryn know exactly why.   The truth is a boy has been bitten and is being kept in Callum’s house until further notice.   Caged.   It’s the only way to keep him from hurting others, like Bryn.   She wants to see him desperately.   The only way is to agree to conditions set by Callum.   That means seeing Chase with at least two older pack members present.   As well as acknowledging the pack bond.   There is an itch at the edge of her subconscious that begs her to listen to the alpha and higher wolves.   The itch she’s been fighting year after year after year.   The itch that gives her the sense of individuality that no one else in the pack can claim.

Becoming part of the pack gives Bryn a new set of emotions to endure.   What Callum and most of the higher ranked pack members says is law.   That means no rebellion or teenage angst.   She manages to get closer to Chase, and realizes that he’s a lot like her.   He was bitten by a Stray as well.   Maybe even the same stray that bit her.   They have a connection no one else in the pack has.   This connection also causes problems for Bryn.   Her rebellious nature still manages to seep past the walls of the pack mentality, and it leads to her life as part of the pack becoming more and more troubled.

Can one write a more awesome protagonist than Bryn?   She’s headstrong and determined, totally feminist and independent, and never takes shit for her ideals.   None of this is in the overdone urban fantasy heroine way, either.   Bryn is a complete original in the world of YA, and she is just such a joy to read about.   I was majorly connected to her during the reading experience, and that takes a lot.   To get to the point where I feel the emotional pain of the character is quite rare and an excellent moment as a reader.   Her complex past involving the Stray attack was also interesting.   It brings to light new layers on her resistance to the male-oriented pack authority and her inability to pretend it’s okay.

Bryn’s further cast into the difficult role of pack or self throughout a majority of the novel.   It’s a major focal point for her inner growth as a character, and it was smartly done in the respect that she managed to convey the exact experiences with the pack that made it both extremely troubling, yet very safe protective.   The reader never completely becomes comfortable with the pack mentality, as Bryn is constantly questioning it and its baser instincts.   Said mentality is very rooted in animal instincts, and the research and thought brought in to the creation of the pack in this novel is evident with how real and animalistic it feels. Especially one scene that ties together the pack theme with the abuse one that really got under my skin.

[spoiler]Following a major misdemeanor from Chase and Bryn, Callum is required to have Bryn punished in some way under pack law.   Either by him or someone else, Bryn has to be beaten to a pulp until the wolf in her knows the error of her transgressions.   Callum does the punishment himself because he feels it’s his duty – and it killed me.   It really killed me inside.   Bryn sees Callum as the ultimate father figure in the book, and to be beaten by him in such a brutal manner completely shook her faith in him.

What will bring the reader and Bryn back from the dark place this scene goes is the immediate action from Bryn’s confidante Ali, who is married to one of the wolves and has two young toddlers to care for as well.   She’s the only other human, and they have a mother/daughter like bond.   Which is why Ali packs Bryn’s things with hers and forces her to go far, far away from the pack.   Because abuse cannot be tolerated, even if it’s by someone that loves you.

Chase was the only character that I really felt lacked dimension.   His relationship with Bryn is very quick and needy, and it was the only flaw in the novel I could find.   So many other great things were going on, and while the romance was by no means the only aspect, it was an important one.   Bryn is such a great character, and Chase just didn’t live up to her greatness.   I can’t wait to see how he is fleshed out in the second novel, Trial by Fire, due next year.

Your writing was great.   I loved your ability to juggle several hard, realistic elements with many great paranormal elements.   World building never suffered, and your novel was a highly original contemporary piece and paranormal piece that read unlike anything else on the market right now.   It’s a realistic book inside a werewolf body, and makes the hard themes all the more realized to readers.   No case of purple prose to be found.   It was a breath of fresh air in the YA novel spectrum.

Raised by Wolves is a novel steeped with great ideas and characters that feel real and impose many questions on the reader that will cause the gears in their brain to turn.   Aside from a shot-gun romance, every aspect was done to the best of its ability, and comes out as a beautiful tapestry that melds together hard contemporary fiction with the pulpy and dangerous werewolf fiction that’s becoming so popular.   Your novel will have no trouble finding an audience, and will be a great jumping off point for someone that doesn’t like the paranormal novels on today’s market.   They will have a hard time hating this one.   A-

*A lot of these ideas were greatly fleshed out in the Smart Bitches, Trashy Books bookclub chat, and I’d like to thank everyone who attended.   Doing a YA novel was a blast, and so many of these ideas became clearer to me post-chat.   Especially the status of bagels and bagel condiments in the wolf pack.*