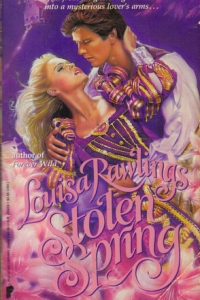 Many years ago, I wrote a fan letter to you after reading your Harlequin books, and you responded very kindly. Years later, I listed your book Promise of Summer on my Top Eight Romance Novels blog post (later revised into a Top Ten list) and, lo and behold, my caption review on Promise was used when Samhain republished Promise of Summer in 2013. So it can be safely said that I’m a long-time fan.

Although Promise of Summer is my favorite, but I’m here to say a few nice things about the book that proceeded it: that is, Stolen Spring, originally published by Popular Library in 1988 (and under your old nom de plume of Louisa Rawlings). I don’t think it’s quite as strong and focused as Promise, but it has a lot of great things about it. Set in France during the end of Louis XIV’s reign, in 1700, Stolen Spring is a lush, sprawling, epic old school romance novel with deft characterization and amazing historical detail. It’s so thoughtfully written, intelligent but also such page-turning fun, that I feel that I can recommend it most everyone. The romance arc between our aristocratic heroine, Marie-Rouge, and Pierre, the mysterious miller she meets by accident is strong and compelling. It’s definitely not a wallpaper historical though, as it delves into the origins of the War of the Spanish Succession. But the primary emphasis is on Rouge and her relationships.

Marie-Rouge, a broke aristocrat hustling with her charming but immature rogue of a dad at Versailles, is trying to contract a good marriage, so she can finally fix up the leaking wreck of a chateau where she lives. She meets a hot, forceful guy named Arsène de Falconet, and after a while he’s ready to pop the question; but unfortunately King Louis’s spymaster, the Marquis de Torcy, uses her dad’s debts and blackmails her into becoming an agent, forcing her into various compromising situations, which she finds increasingly difficult to explain to Arsène, her golden ticket. You see, while Arsène is hot, he’s also obsessive and creepy, and he’s too willing to believe that Rouge is a slut and only worthy to become his mistress. He tricks her into taking a carriage ride alone with him; and once his dishonorable intentions become clear, she escapes and hides with a miller named Pierre in the village of Selommes.

Now, Pierre is the hero of the book, and if you have any familiarity with the romance genre, you can probably guess his secret.

]He’s actually the Duc de Villeneuve, a former soldier who’s suffering from severe PTSD, in addition to a vicious scandal at Versailles where his ex-lover killed herself. He is recovering from court life, and the army, by living the routine of a miller. I usually hate the hidden aristocrat trope with a vengeance, but I don’t here.
I find that the way this plays out, and the discovery of Pierre’s background, is actually quite interesting and skillfully done. Also, there’s a huge emphasis on Rouge becoming a happier, more well-balanced person by living in Selommes and becoming part of the community. A few vicious aristocrats show up and dump on the locals, but Rouge comes down on them like a ton of bricks. It’s quite refreshing, IMO.

There’s a ton of world-building going on here, which I love. You really get a sense of ancien regime France, almost a century before the French Revolution, with the decadent cliques at Versailles, remote from the poor barons, wealthy farmers, peddlers and peasants living their ordinary lives out in the country. There’s no anachronisms, and the dialogue is wonderfully in-period, with no goofy missteps. Also, the story takes its time, detailing Rouge’s time at Selommes, her return to her estate at Sans-Souci, her visit to Fontainebleau (with lots of fun details along the way like how millstones worked, the difficulties of travelling by public coach in the 1700s, or the history of the fontanges headdress,) and finally the action comes to a climax as she flexes her spy muscles and foils a dastardly plot and earns the respect of Torcy.

I really like Marie-Rouge as the heroine. She’s smart, funny, calculating but impulsive, and very practical. She also eats like a horse. Pierre, the not-miller she shacks up with in Selommes, is pretty cool guy who struggles with his past. Pierre is infinitely preferable to Arsène, but Pierre’s characterization is a touch vague compared with Marie-Rouge’s spectacular specificity. He’s got a temper, he’s straightforward, and he’s good company with a sense of humor about himself, but he does come across as a bit of “idealized hot guy from the country” at first. While I could understand why Marie-Rogue liked the guy, I didn’t actually find him as compelling as the heroine until the last third of the book.

]That’s when you discover the Duc de Villeneuve reveal, and you find out he’s a tortured ex-soldier with plenty of skeletons in his closet, which explains his behavior in large part.

Old School trigger warning alert: while there are no rapes from the book, there are several attempted rapes—once by Arsène, once by some random louts in Selommes, and once by a very drunk Pierre—which Marie-Rouge later excuses away. There’s also several high-octane fights between the two which verge on the edge of tedium, and a B-romance between Marie-Rouge’s maid and a steward of an estate where he shows his interest in her by spanking her (for her “impudent tongue”) and giving her a kiss. So yeah. I was less than thrilled at those parts. However, given how widespread rape was as plot device back in the ‘80s romance genre, I think, Ms. Halliday, you used considerable restraint. I was not offended enough to put the book asides, and I usually loathe old-school rape tropes with every fiber of my being.

Which brings me to the villain of the piece, Arsène. Other reviews have noted that he steals Pierre’s thunder a bit. Which is kind of true. He’s good-looking, sexy and very dark. But he’s also a complete ass who does not respect the heroine one iota, and she constantly calls him out on it. The treatment of his character is actually a fascinating deconstruction of the “alpha asshole” character. Other books would have sentenced Marie-Rouge to marriage to this creep, so she could “redeem” him, but thank God that doesn’t happen here. She finds this other guy, Pierre, who has issues but he’s much more agreeable company. Also, even though they have rough patches, their journey to mutual respect is a key part of the book, and provides much of its emotional heft. In the end, Pierre apologizes multiple times to her for not trusting her. Also, he likes cats!

Yes, there is a cat named Jerusalem. Jerusalem is not important to the plot, but she does play a key part in the end. The ending, after the sweeping sturm und drang of the story, is sweet and heart-warming (for cat lovers and non cat lovers alike). It’s so well-constructed; every piece that’s introduced into the story is important, and pays off in the end. Also, it holds up to rereads. It’s a dense, rich, fascinating read, with a lot of depth.

Ms. Halliday, I commend you on this amazing book. I give Stolen Spring an A-.