Please note: If you think this series might be of interest, you may wish to avoid this review—it’s full of spoilers for books one and two. Start with my review of Pretty Pretty Boys, book one in the series, instead. 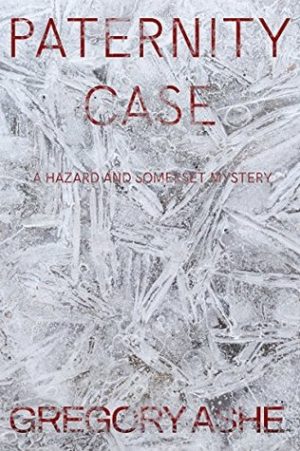 Recently I got into your Hazard and Somerset series. I gave Pretty Pretty Boys and Transposition a C+/B- and a C- respectively because the mystery plots in both didn’t work that well for me. But the romantic elements—wow! After the first book I knew I wanted to read the entire series. So when I finished those I went for book three, Paternity Case. Unlike the first two books it did not disappoint.

Police detectives Emery Hazard and John-Henry Somerset have a fraught relationship and a dark history. In high school Somers was one of three boys who made it their life’s mission to bully Emery Hazard, the only openly gay boy in their small hometown of Wahredua, Missouri. Hazard suffered a lot and while Somerset has grown up, taken responsibility, and apologized, that past will always lie between them. Despite all this, they have developed a great working partnership and a friendship. And though it’s only been acknowledged in a couple of kisses and in Somers’s smart-alecky remarks, a powerful attraction sizzles between them.

But each is involved in a relationship with someone else. Somers has tentatively begun to patch up his marriage (he and his wife, Cora, have been separated for several months) and Hazard been dating Nico, a graduate student / model nine years younger than himself, for the last two months. As the book opens, Somers and Hazard are on a double date with Nico and Cora making up the other two corners of the square.

Predictably, the date is not going that well, and when Somers gets an urgent phone call in the middle of their dinner he yanks Hazard out of the restaurant so that he can have backup. The emergency turns out to be a call about an intruder from Somers’s father, Glennworth Somerset, to his son and not to the police. Hazard is pissed off but Somers insists he needs him there.

A Christmas party is in full swing in Somers’s childhood home when they arrive and the intruder is a naked man in a Santa hat. At first the man seems harmless and Somers handcuffs him to a chair.

While this is happening Hazard finds a corner to brood in. Somers’s parents hate him. His partner’s mother, Grace Elaine Somerset, approaches him in a dangerous, seemingly seductive and almost predatory way. Glennworth Somerset treats him like something stuck on the bottom of a shoe. Also present is another person from the past—Bing, who was a few years ahead of Hazard and Somers in high school and as a young man mistreated Hazard.

Hazard and Somers are finally about to leave when someone yells, “Gun” and both Glennworth and Bing’s eighteen-year-old daughter, Hadley Bingham, practically glued to each other on the dance floor, are shot. A single bullet kills the girl; despite being shot five times in the chest, Glenn somehow survives.

Somers applies pressure to his father’s wound and then more police arrive. In the aftermath, Hazard drives Somers to the hospital so he can be there to support his dad. The shooter was the naked Santa, a man named Wayne Stillwell, but just how he escaped the handcuffs and obtained the gun is unclear.

Chief Cravens thinks that Somers, understandably traumatized and confused by his father’s shooting, doesn’t have the facts straight and didn’t really cuff Stillwell to the chair. The question of what exactly happened becomes difficult to answer when Stillwell is shot five times and killed, all while in police custody—by a man whom Hazard and Somers know to be a crooked cop.

Cravens rules that Somers has a conflict; one of the victims is his father so he and his partner can’t investigate the case. Hazard and Somers argue otherwise and she orders them to go on leave. Foley and Moraes, two cops not as competent, are assigned to investigate.

Hazard and Somers refuse to sit back. They visit the morgue and the crime scene, and interview witnesses without Chief Cravens’ sanction. Then Warhedua’s sinister mayor calls them into his office. Sheriff Bingley (Bing’s father and the dead Hadley’s grandfather) is also present. Both men warn Hazard and Somers to drop the investigation. They hold a threat over Hazard’s head: stay away from the case or have your secret (the reason he was ousted from the St. Louis police force) made public.

But Hazard won’t abandon his friend, and Somers’s need of him has never been greater or more apparent. Somers is on an emotional see-saw, unable to view the murder clearly because his father was most likely the intended victim.

This is a stronger book than the two preceding ones. Somers’s and Hazard’s romantic feelings and emotional connection are heightened by rawness of Somers’s feelings. Hazard is aware of just how much Somers needs him to be present to a point of disregarding Nico’s anger over it.

Somers too senses his own vulnerability, even though it takes a while before he can acknowledge that his conflict of interest is keeping him from thinking straight. On top of the trauma of his father’s near-death, Somers, like Hazard, has reason to fear that a destructive secret may come to light. Fifteen years earlier, in the face of their high school enmity and secret attraction, Somers betrayed Hazard. Unlike the horrific bullying that Hazard is well aware of, this involves something Hazard doesn’t know about. And if Hazard learns about it, their hard-won friendship and partnership will be jeopardized.

Somers’s secret serves a second purpose in the story; it fills in some blanks in Hazard and Somerset’s high school history. In my review of the Pretty Pretty Boys I said that not all the dynamics of their past and the way it changes in the present were 100% convincing, but with some of the missing details filled in, I am now convinced.

Also fleshed out is Somers’s backstory with his parents and his difficult home situation in childhood. While Somers was not abused, his father was emotionally distant and neglectful and his relationship with his mother was problematic too.

Somers wrestles with his feelings for Hazard in this book. He’s acknowledged the physical attraction in the past to an extent but here he starts to face the fact that their relationship has emotional weight as well.

The mystery plot is stronger in this book than it has been in earlier ones. For one thing, with Somers’s father’s life on the line, the stakes are higher than they’ve ever been before. For another, the mysteries in the first two books didn’t hang together well and were convoluted and a bit confusing. None of that’s an issue here. The solution to the mystery is unpredictable and yet convincing. Everything falls into place in a satisfying way.

In the first books there were a couple of dropped threads that read like plot holes. Here Somers’s mother makes a statement that under other circumstances should have been followed up on but Somers’s emotional state and his secret provide good reasons for him to drop it.

Because of all we learn about Somers here he becomes more likeable and easier to understand. As for Hazard—despite his curtness he is clearly there for Somers in a potently romantic way.

As with the first book, almost every turn in the mystery is accompanied by a turn in Somers and Hazard’s relationship. That, too, raises the stakes and adds to the reading pleasure.

Aside from Stillwell, the new side characters introduced in Paternity Case are not quite as over the top as those we met in the two earlier books. And there is a theme of parenthood and its pitfalls. Somers may lose his father, Bing has lost his daughter, and we see Somers’s two-year-old daughter, Evie, on page for the first time. Grace Elaine Somerset’s approach to parenting is also touched on:

Somers knew, but he knew in a restless, dream-shadowed way—in a way that he refused to examine head-on. He knew, though, that it was only luck or God or fortune that had saved him from the path his mother had worked so hard to hoe and hack and clear, a path to narcissism and sociopathy. Only luck or God or—

The writing, too, is the strongest it has been so far. Description is sensory, tangible, for example, as when a basement is described:

The door swung open easily. Inside, only darkness. Then the air shifted, and on the frozen currents came a mustiness, like wet carpet and a dog that’s been in the river and old socks all rolled together.

Description and emotional state are also unified in a spare way:

Leaving the basement, Hazard climbed the steps two at a time. Somers trotted behind him. From the family room windows, Hazard could see that even in the morning sun, the exterior lights were on again. He left through the front door. The wind had settled, and the day was calm. The sun was warm on his back, and the snow seemed to double the sunlight, as though the light were radiating from opposite directions. It made everything seem disconnected, directionless, suspended. There wasn’t a shadow for a mile in every direction, and it made Hazard’s eyes hurt.

The syntax also complements the relationship and emotions of the characters:

A warning prickle ran up Hazard’s spine. He wasn’t normally attuned to the subtle clues that people gave off—at least, not the way Somers was. But he was attuned to Somers, attuned like a goddamn lightning rod in a thunderstorm, and something in Somers’s voice, something in the thousands of cues of his chest, his hands, his jaw, something told Hazard that whatever was coming next was going to hit like a mother.

The reason I kept reading this series even after the just okay first and disappointing second book was that they gave me a sense of possibility, a feeling that the writing, though somewhat amateurish, held the potential to mature. This third book fires on all cylinders. Here the mystery is stronger, the stakes higher, the emotions more moving, and threads that have been set up in the first two books begin to come together. The ending is terribly romantic, too. Here’s hoping that’s a sign of things to come.