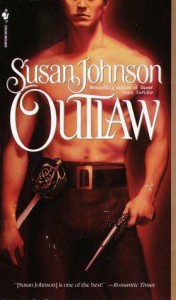 The characters in your books are often writ large and Outlaw is no different but the extravagance of the characters, from their emotions to their actions, to the narrative, all fit together.

Johnnie Carre, the Earl of Graden, Laird of Ravensby, is a young, wealthy and powerful Border lord but in the year of 1704, being wealthy and powerful on the border between Scotland and Englad meant being ruthless with the sword, ready with the bribe, and quick with the verbal parry. Johnnie excelled at alll three not to mention his prowess in the bedroom. His wealth and power and pedigree (Scottish) inspired jealousy and hatred in many but in particular Harold Godfrey. The animosity between the two reached a fervish height when Godfrey kidnapped Johnnie’s younger brother and heir, Robbie.

Unable to storm the Englishman’s castle, Johnnie Carre took someone valuable to Harold: Elizabeth Graham. Elizabeth wasn’t valuable to her father because he loved her. Elizabeth was nothing more than an asset. Harold had sold her once, when she was sixteen, to an old wealthy man, Hotchane Graham. Graham had recently died, leaving his wife of eight years a large fortune. Since her widowhood, Elizabeth has been seen as untouchable, heavily guarded by her father’s garrison and her own private army.

The hostage taking, a time honored border tradition, brings Johnnie and Elizabeth together where they may not have met in the past. Johnnie, whose attentions cast a wide and varied net, didn’t ordinarily pay attention to the virtuous widow, particularly the daughter of one of his hated enemies, Harold Godfrey. Elizabeth spent her first sixteen years as a pawn of her father and then eight years under the thumb and body of another old man. The last thing that she wants is to be tied to yet another powerful and profligate man.

Much of the first half of the book is about wanting and not having. Sexual tension is rife whetting the reader’s appetite.

"And this is all new for you-‘this abstinence."

Johnnie's sigh this time was an exhalation of strained resignation. "Totally."

"Do you feel the inspiration of this new and noble temperance infusing your soul with virtue?" Munro teasingly mocked.

"Actually, I'm at the point of hitting the next person I speak to out of frustration alone."

Much time is given to showing how unrestrained Johnnie’s life was before he meets Elizabeth and thus, his interactions with Elizabeth are markedly different.

"I could change plans," Elizabeth had said, "but George Baldwin's sister is scheduled to return to London on Thursday, so we'd made arrangements for a small gathering on Wednesday. I'd really hate to disappoint her. She's very pleasant – and an excellent harpist. Do you enjoy the harp?"

Munro's amazement took the form of a sudden coughing fit.

"I hope you haven't taken a chill, Cuz," Johnnie smoothly observed as his cousin attempted to regain his composure.

It was a journey of fascinating revelations-‘with Johnnie Carre on his very best behavior. Munro considered the three-hour ride to Three Kings the most faultless example of lust-driven prevarication he'd ever had the good fortune to see

For Elizabeth, she paid for her independence with precious coin and she plans to use her wealth to protect her freedom. Even if she has feelings for Johnnie, she is a pragmatist. She has the means and the will to take actions that do not include Johnnie which leads to one of the most thrilling wedding scenes I’ve read in a romance. Three hundred mounted men ride from Ravensby Keep to Hexham and storm a chapel.

I wanted to add how much I loved the detail in the story. As the clansmen are running through the keep, they had to run single file because the “In the medieval portion of Goldiehouse the ceilings were low, the hallways narrow, built for defense centuries ago. Only one man could comfortably navigate the corridors.” Johnnie is described at one point as “a Border chieftain of renown, a freebooter in diamond buckles and courtly attire.” Elizabeth, during the exchange, is attired in a lavender wool cape with embroidered violet leather gloves. Her father “the corpulence of thirty years' dissipation was partially concealed beneath the well-cut leather and elegant bossing of his silver-studded jack.” The people, the settings, were all so alive.

I’ve re-read this book often and it never fails to entertain me. I like how Johnnie and Elizabeth do not change their fundamental nature. Johnnie remains autocratic. Elizabeth still wants her independence. Their love for each other only changes their priorities. The story is driven by both internal conflict and external conflict and the sex scenes, while lush and plentiful and innventive for the time, played an important part of displaying the characters and their internal struggles with love and possession. A-

PS Dear Bantam, while I appreciate your efforts in digitizing the backlist, you really, really need a proofreader. The number of OCR errors are kind of embarrassing.

It’s cheapest on the Nook at $5.19 unless you are a Fictionwise micropay user.