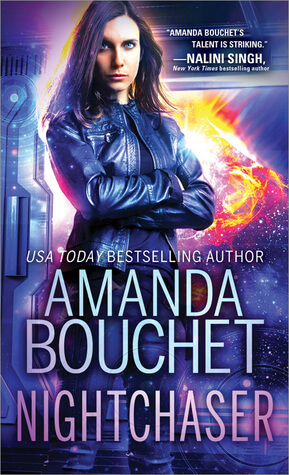 Nightchaser is kinda-sorta Firefly with a female (and better) Mal; Star Wars: A New Hope with Leia as the main character instead of Luke, Kate Daniels in space. Those are all compliments by the way. It starts off at a cracking pace, with danger, tension and a narrow escape from the Dark Watch for Tess Bailey and the crew of the cargo ship Endeavor. As openings go it’s pretty brilliant and the story hooked me straight away.

I’m pleased to say that the rest didn’t disappoint either. Apart from one or two things which felt a little clunky in their introduction, Nightchaser was both a ripping yarn and a sexy romance with more than a hint of swoon and I loved it.

Tess Bailey is the captain of the cargo ship, Endeavor. It’s crew consists of Jaxon, Fiona, Miko and Shiori. They’re part of a loose conglomerate of rebels fighting against the totalitarian regime of the Overseer. When the story begins, the Endeavor is on the run from a Dark Watch cruiser and General Bridgebane. Tess and the crew had stolen a space lab filled with what they thought were vaccines of “cure-all”. Tess’s plan was to take the vaccines to the orphanage at Starway 8 which had much need of the supplies. Only, it turned out the vaccines weren’t vaccines at all. Rather they were a super-soldier serum, an “enhancer”. When she’s attached the lab to her ship, Tess had also picked up “Big Guy”, a large black man who may well have been a test subject in the lab. If that’s the case, he’s certainly not very happy about it. The Dark Watch are far more dedicated to recovering the serum and the lab than they would be if it was just cure-all and as the book begins, the Endeavor is cornered between the Dark Watch cruiser and the Black Widow – a black hole. The Endeavor is almost out of power, they’re taking fire and there’s pretty much nowhere left to run.

They’d consider us all repeat offenders simply for breaking out of prison. Now I had the vaccine heist and an attack on the military against me as well. There’d be no jury, no trial, and no more wasting food and space on a criminal like me. Jaxon was in the same position, but not for theft. I called what he’d done in the Outer Zones heroic. The galactic government called it murder—because they’d won.

Shiori had never technically been arrested, but Fiona was a bio-criminal who’d created at least three major airborne plagues when she’d been fighting alongside the rebels out in 17, just like Jax. And Miko had cut off her own left hand to get out of shackles, so I was pretty damn sure she didn’t like being chained up.

At first I thought that “Big Guy” was the hero but that’s not the case (I tend to imprint on the first likely male rather like a baby goose). After a daring escape, Tess needs to dock somewhere to make repairs to the extensive damage the Dark Watch guns did to her ship and charge up the solar batteries. They land on Albion 5. After asking around for a reputable repairer, Tess is referred to Shade Ganavan. He’s the hero – although it takes him a while to cast himself in the role.

The banter between Shade and Tess is delightful. He’s a kind of Han Solo type character, perhaps a little more ethically challenged and much better (eventually) about sharing his feelings and himself.

In any case, Shade Ganavan was making money somewhere—even if it wasn’t here.

Uh-oh. “Don’t tell me you’re a pirate. Is all this stuff stolen?” I asked, thinking about Flyhole and all its corrupt bandits only a short jump away.

His mouth turned down. “Not a pirate, sugar. More like a space rogue.”

He nodded. “A phenomenal one, at that.”

My eyebrows shot up. “Space Rogue Phenom? Really? Maybe I should call you SRP.”

His dark eyes glittered as though I’d just thrown down a gauntlet, and he was more than ready to pick it up. “Only if you want me to call you RLCA.”

I stared at him, my heart going berserk in my chest. He stared back.

His brow suddenly furrowed. “Holy shit, you’re turning bright red.” He looked pissed off again. “Doesn’t anyone ever flirt with you? You married or something?”

We learn very early on that the Tess is actually Quintessa Novalight, the daughter of the Overseer and the “enhancer” serum is based on her blood. As a child she was constantly experimented upon and at age 8, the Overseer decided he didn’t need her anymore. Tess’s mother had died from a fever and Tess’s Uncle, Nathanial Bridgebane had been tasked with killing her on behalf of the Overseer. Uncle Nate had been a good guy but something happened and he became General Bridgebane, a commander for the Dark Watch and the Overseer’s right hand man. However, instead of killing Tess, he dropped her off at the orphanage on Starway 8, telling her to keep hidden or he’d kill her for real the next time he saw her. The Overseer and everyone else believed she’d died of the same fever which killed her mother.

After leaving the orphanage at age 18, Tess started a rebel life and in the process got arrested and ended up on the prison planet of Hourglass Mile where she met Jaxon. During their escape, the “liberated” the Endeavor and picked up Fiona, Miko and Shiori. They’d been together ever since becoming family to one another.

Most of the book is told from Tess’s first person perspective but there are a few chapters from Shade’s third person POV. In the first such chapter, we learn that Shade is well-named. He’s a bounty hunter of sorts and Tess has a massive price on her head – worth more alive than dead but either way, enough to pay off a significant debt he owes and thus regain his birthright – something he’d been working towards for the previous decade. Shade has a real dilemma. He likes Tess. He met her before he knew about the bounty on her and everything about her floats his boat. She’s strong, feisty, smart, beautiful, brave and awesome. He’s at once charmed by her and terrified for her because it’s obvious she’s in a lot of trouble. When he learns about the bounty he’s even more terrified because he knows all the other hunters will be after her. If he takes her in at least she won’t be harmed.

This is a romance novel so I don’t think there are any prizes for knowing Shade’s ultimate decision but it’s something he wrestles with. It’s certainly not an immediate decision on his part and the book makes it clear he has powerful reasons for wanting to claim the prize money.

Still, while he’s “deciding” he repairs Tess’s ship and spends time with her and dammit if he doesn’t like her even more as the days go by. Tess, for her part, is interested in a sexual relationship for the first time in seven years. For some reason however, Shade is playing hard to get. He’s sending mixed messages; kissing her one minute, pushing her away the next. He’s offered some self-defense training and constantly urges her to be more careful but in the next breath he gets all gruff and aloof. Tess and Shade are drawn to one another more and more however and eventually things come to a head.

There are really no surprises as to what happens next. That’s not to say I wasn’t completely along for the ride though. When I thought about it, it practically had to happen the way it did. What did surprise me though was what happened after that. I really wasn’t expecting that.

I suppose the ending was a little deus ex machine but it also had a neat elegance to it which worked for me.

So much about the book is seamless, there were a couple of things which jarred because their introduction felt a little clunky. Tess has a particularly close (non-biological) relationship with a child on Starway 8, Coltin. And, she had a romantic relationship with a fellow resident on Starway 8, Gabe. She hasn’t seen him in seven years and thinks he might well be dead or in prison. Both Coltin and Gabe are important in the story; they inform Tess’s motivations but the way they first pop into the novel felt shoehorned rather than organic. I noticed them particularly because the rest of it was entirely the opposite.

It’s a cracker of a book. For those worried about Nightchaser being the first in the Endeavor trilogy, I can provide the assurance that it has a HFN ending (only because they are rebels and things are dangerous but romantically, things are good). But it works well as a contained story so there’s no need to wait until all three books are out. It ends in a pretty good place even though there’s clearly a lot more to come.

I had some discomfort in A Promise of Fire with consent issues but all was good in Nightchaser. Shade is careful to get Tess’s consent and he doesn’t take advantage, notwithstanding his murky motivations as he’s deciding whether to claim the bounty on her or let her go. There was some diversity in the cast which I appreciated and some LGBTQ rep as well. There’s also, hands down, one of the funniest shower scenes I’ve ever read.

Nightchaser is sexy and tense and full of adventure and risk, with high stakes, great characters and some really unexpected turns. It would make a fantastic movie – Netflix you should get right on that.