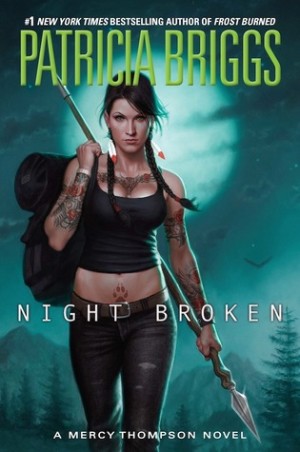 Dear Patricia Briggs,https://amzn.to/3zQT1AuI’ve long been a fan of both your Mercy Thompson series and your Alpha & Omega series (which is set in the same world but follows different people in it).  I’ve read them all in print and listened to them all on audio as well.  Which series I like best most often depends on which book I read most recently. Right now it is the Mercy series.

This is the 8th book but readers would be mostly lost to start here.  All of the books have been B+ or higher for me, so I don’t feel bad saying that to potential readers.  (For those who haven’t read the series before, start with Moon Called and be aware there are spoilers for this and the Alpha & Omega series to follow.) I read the first five books in a marathon of about three-four days, so I’m kind of jealous of those people who could start at book one and read all eight in a row.

I admit I’m finding it difficult to summarise the plot without giving away spoilers.  It almost seems to me that to say anything much is kind of spoilery but I’ve gone with the rule of thumb that anything in the first third of the book is pretty much okay.

For readers who don’t want to be spoiled, here is the short version:  it is really good, the ending is rather abrupt and I am already salivating for the next book in the series.  Also I still adore Adam Hauptman – he is one of my favourite heroes and Mercy Thompson Hauptman (she insists on the additional surname these days) is awesome and kicks ass once again.

Now for the long version:

When Night Broken begins, two important things happen: Mercy is visited by Alistair Beauclaire (the fae Gray Lord who, in Fair Game (A&O 3) all but declared war on the US after the justice system failed his family).   The walking stick, the fae artifact which has been following Mercy about since early in the series and which has come in very handy from time to time, was made by Beauclaire’s father.  He wants it back. Now. The problem for Mercy is that, after the events of River Marked, she “gave” the walking stick to Coyote – and she doesn’t know where he is or how to get in touch with him quickly.

The other thing is that Christy, Adam’s ex-wife calls, terrified and traumatised by a man who is stalking her.  She asks Adam for sanctuary and because she is the mother of Adam’s child (Jesse) and because Adam is who he is – a protective, care-taking Alpha – he says yes.  This puts a strain on Mercy’s relationship with Adam to some degree, but more so with her relationship with the Pack.  Mercy has to balance her own jealousy and her desire to smack Christy down fast and furious and her (most of the time) stronger desire to put the well-being of both Jesse and the Pack first.  The stalker, Juan Flores, is a Very. Bad. Man.  Actually, he’s not a man.  I think I won’t say what/who he is.  Finding out is part of the fun of the book.  Essentially, the rest of the story is Mercy and her compadres trying to identify, locate and defeat Flores – the walking stick and Coyote play a part in the whole thing.  And then there’s Christy.

I’m not usually a fan of the “evil ex-wife” trope.  I don’t like one-note characters who are only there to make the heroine look good.  Christy certainly fit the stereotype but I found her well developed enough that it made her more than a caricature.  She has been a consistent though bit player throughout the series.  She’s not a bad person per se, but she’s very selfish and takes care of herself first (and possibly second), and others after.  Series readers know that she hurt Adam deeply by rejecting him, his wolf and his Pack (she left him – whyyy? *flails*) and that she is unreliable when it comes to visits with Jesse. I felt there was some attempt to make her more than just a thorn in Mercy’s side, while still keeping her character consistent and I don’t think she was demonised (although I also think there might be robust debate on this issue).  It was completely understandable that Mercy would not be Christy’s biggest fan – and the book is told from Mercy’s first person POV so that was always going to be the flavour of things. That said, Mercy is not an unkind person and she tried hard not to hate Christy and to see good in her. I don’t think many women would cope so well with her husband’s ex-wife coming into her house – the house said ex-wife decorated and used to live in no less – and basically taking over.

Mercy is worried about what it will do to Jesse if she and Christy are openly at odds as well as the effect it would have on the Pack.  The Pack was damaged by the death of their only submissive wolf, Peter, and things haven’t yet settled.  Mercy does her best to keep the peace under great pressure from Christy.   Christy is just about everything Mercy is not.  Christy is a girly-girl with beautiful nails and wonderful cooking skills and she “needs” someone to take care of her.  She also “threw Adam away.”  Mercy is none of those things and she would never, ever, throw Adam away.  Christy brings out insecurities Mercy was aware of and some she didn’t previously know about.

Christy uses tactics I’ve unfortunately seen in real life (used by women and men) which makes one appear petty and small to argue with them.  One inevitably feels drawn down to their level to engage at all and they are very frustrating to deal with.  Because I know people like that, I was prepared to give Christy’s characterisation a pass here.  Not everyone will.

There were some things in the plot which didn’t seem to go anywhere and where I felt the story lost momentum. Perhaps they are part of the setup for a future book in the series, but here, the Cantrip agents felt out of place and Zack didn’t seem to have much to do.

I love the romance between Mercy and Adam and I think there is a lot of it for romance readers in Night Broken. While, Adam and Mercy aren’t seriously threatened by Christy’s machinations, there is some minor damage to be cleared up from time to time and they take the time to attend to those small wounds throughout the book so that they don’t fester.  Adam knows who and what Christy is, even though he can be manipulated by her along with everyone else it seems.  Maybe that’s a bit odd given who and what Adam is, but I put it down to the long history he had with Christy and the thousands of little wounds that left weak spots when it came to her. Plus, I think it has been consistent in the series that one of the surefire ways to get to Adam is to suggest he is a poor caretaker/protector.

I had heard that the book has an abrupt end.  It does. There is no reason to be scared by this *shifty eyes* (My lips are sealed).  There are a couple of things which aren’t tidily cleaned up, a new spanner in the works which could be pretty interesting (or not) and Coyote is his usual cryptic self – there’s more about he and Mercy to be learned in future books I feel – but the story doesn’t have a relaxing epilogue to allow readers to catch their breath.  Because of that, there is a sense of ending on a gasp but I can’t really complain about it.  I’m always happy to read more Mercy (and Adam) so I would have liked more but I’m not sure the book needed it.

There was a part, near the end, which had me teary – it was one of those “darkest before the dawn” moments and everything was looking pretty dire.  Mercy and Adam just about broke my heart and I was seriously wondering if – well, perhaps I shouldn’t say anything more about it because: spoiler.

Mercy and Adam work together in this book (I feel like it was more so than in previous books which seemed fitting given the progress of their relationship), but Mercy is her usualy resourceful, clever self and she remains front and centre in the story.  She doesn’t foolishly put herself in danger; she realises her strengths and weaknesses but she fights when she has to and she fights hard and well.  Her actions in this book did a lot to garner her more support/respect within the Pack.

I love this series and I devoured this book in one day – I plan on getting the audiobook too (the narrator, Lorelei King is wonderful) and it will be one of those few books/series I will re-visit.  Night Broken gets an A- from me.

[ Warren] frowned at me. “Before Christy came, I never thought about how much you manipulate the people around you—it doesn’t feel like manipulation when you do it.”

“The difference is,” I told him, “that I love you and want everyone to be happy. And”—I lifted a finger—“I know what’s best for you.”

“And,” said Adam, “Mercy’s not subtle. When she manipulates you, she wants you to know you’ve been manipulated.”

I’d already crossed the living room toward the wing with the bedrooms, but I turned around to stick my tongue out at Adam.

“Don’t point that at me unless you are going to use it,” he said.

I smiled until I was safely out of sight.

→ Kaetrin
Previous article: What Does it Mean to Read for Comfort?
Next Post: Wednesday News: Anna Quindlen on happiness, more ebook data, another study on reading habits, and a revisioning of Snow White