I don’t remember the last time I sped so quickly from one book in a series to the next. Much of that is to do with the fact that I usually have to wait at least a year in between installments of my favorite urban fantasy series. But, in this case, I came to the Colbana Files with two books already out, and I’m not too proud to say I read the last word of Blade Song, immediately downloaded a copy of Night Blade to my Nook, and began reading without blinking an eye. Much of that is to do with the fact that by the end of the first book, Kit, Damon, and the various and sundry denizens of East Orlando had me thoroughly absorbed in their world. I did wonder, idly, how my feelings would fare in the second book. From the opening lines, it becomes clear that a matter of months have passed since the tumultuous events of Blade Song. I liked the fact that things happen in the intervening time, that Kit has been working jobs as usual, that Damon has been dealing with the fractious clan of cats, that they haven’t been waiting around for me to get things done. As for me, I fell back into their days without a ripple and, from that point on, the pace didn’t let up once. 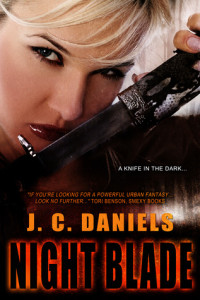 Kit never expected to find happiness. It’s not an emotion she’s had cause to become acquainted with. And while she’s suitably loath to label what she’s experiencing now as such, she’d be a fool to deny the fact that life as she knows it changed for the better after Damon Lee walked into her life. Far from joined at the hip, the solitary PI and the reluctant alpha spend the majority of their days separate, mired in the demands of their jobs. Between her clients and his clan, they’re hard pressed to find time alone to talk, let alone attempt to navigate the tightrope that is their tenuous bond. And when a former significant other and current agent for the non-human law enforcement agency known as BANNER darkens Kit’s door with an offer she literally can’t refuse, it lays the first brick in a wall she’s afraid will permanently separate her from that glimpse of happiness. Apparently, select members of the Council have been dropping like flies, and her ex Justin informs her that Damon is the lead suspect in the case. Justin’s on a timeline to provide some shred of proof Damon isn’t behind the deaths before he’s scheduled for execution, and he wants Kit to join forces with him. Wants it bad enough he’s willing to spell her with a magical gag, making it impossible for her to talk about their clandestine mission. Backed into a corner, Kit hits the ground running, determined to clear Damon’s name even if it means alienating him along the way.

I’ll go ahead and say I was worried the enforced secret-keeping would grow irksome, driving an unnecessary wedge between two characters I admired. I didn’t want to lose my respect for them so soon, and I really didn’t want to be forced to sit back and watch them tear each other apart at the hands of a careworn plot device. I should have known better. There is nothing tired or flimsy about this story, and for every ounce of sweat I shed watching Kit suffer in silence, an equal measure of sensitivity and respect grew as I watched her in action. Which is not to say that crippling amounts of pain and anguish do not lie beyond this point. But the dramatically high stakes served to illuminate the nature of Kit and Damon’s bond, for the reader but for Kit as well. If I was surprised at how protective I felt of these two in the first book, it was nothing compared to my level of attachment in the second. Chief among my concerns going in was how well the “established” relationship would fare so early on in a series. Used to couples that take books and books to come to some sort of agreement, I had no idea what to expect from this more accelerated structure. The liberal dose of wit and palpable charisma with which Kit and Damon are painted puts me in mind of Ilona Andrews’ Kate and Curran.

I stroked my hand down the grip of my blade and turned away from the window. “I don’t have time for this. They’re out in the parking lot and my shadow-cum-babysitter is smirking like this is all very amusing to her.”

“Yes.” Some of the tension had faded from his voice. I knew him well enough to figure out just what had caused at least some of the tension. My inner child lurks very close to the surface at times and she escaped my grasp before I could stop her. “I tried to get him to send that big piece of meat in a suit, but I don’t think he likes me.”

“Yeah.” Rocking back on my heels, I stared at the wolf in question and smiled. “I think he’d like to be you, but he’s not doing a good job of it. Still, I thought he’d make interesting conversation—“

“Kit. Are you trying to make me kill somebody?”

I laughed. “No. If I wanted to do that, I’d discuss something other than his conversation skills.”

When they’re not snarling at each other or bending over backwards to save the other’s life, they’re really disarmingly charming. Which is why when things go to hell in a hand basket, it’s so difficult to maintain any sort of readerly composure. I failed just miserably. As I said, the whole thing builds steadily, and the ominous crisis I thought I knew was coming still managed to take me by surprise. Fully immersed in Kit’s head, I never saw it coming.

The few friends and allies Kit has amassed in the course of her work offset her solitude to a degree, and I loved the additional insight we get into all of their backgrounds, especially Doyle (Damon’s ward and the young werecat she saved in the first book) and Colleen (the rogue witch who heals her on an alarmingly frequent basis).

This was Damon’s closest friend.

He trusted nobody the way he trusted Chang. Raking my nails down my forearm, I turned and stared at the man waiting patiently behind the table. “Have you ever had to do a job that you hated with every fiber of your being?”

He inclined his head. “At times. I usually try to find a way to avoid such jobs.”

“Sometimes you can’t. Because it’s the only way to take care of things that matter most.” I was able to force those words out, but just barely. The binding weighed in closer and closer, making it hard to breathe. “Sometimes, the only way to care for those things is to do something that leaves you feeling sick, twisted, broken inside.”

“Whatever you’re protecting, if it’s worth that much . . . it will work out,” Chang said gently.

I stared at him for a long, aching moment. “I hope so.”

Oh, Kit. I finished Night Blade in a state of mind similar to the one I found myself in while reading the final pages of Catching Fire. The ending is not a cliffhanger, per se, but the Big Bad gets alarmingly free reign in the last section. And once all the bad things have happened and the calm after the storm unfurls, I came to myself throbbing with pain and incandescently angry at every last person but Kit. Rage aside, I love it when an author isn’t afraid to change the name of the game. If I wasn’t exactly prepared for the level of hell this story was headed for, I was more than willing to wade through it for Kit. Provided I don’t have to wait an entire year to find out what happens next. A-