REVIEW: News of the World: A Novel by Paulette Jiles 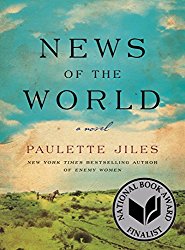 In the aftermath of the Civil War, an aging itinerant news reader agrees to transport a young captive of the Kiowa back to her people in this exquisitely rendered, morally complex, multilayered novel of historical fiction from the author of Enemy Women that explores the boundaries of family, responsibility, honor, and trust.

In the wake of the Civil War, Captain Jefferson Kyle Kidd travels through northern Texas, giving live readings from newspapers to paying audiences hungry for news of the world. An elderly widower who has lived through three wars and fought in two of them, the captain enjoys his rootless, solitary existence.

In Wichita Falls, he is offered a $50 gold piece to deliver a young orphan to her relatives in San Antonio. Four years earlier, a band of Kiowa raiders killed Johanna’s parents and sister; sparing the little girl, they raised her as one of their own. Recently rescued by the U.S. army, the ten-year-old has once again been torn away from the only home she knows.

Their 400-mile journey south through unsettled territory and unforgiving terrain proves difficult and at times dangerous. Johanna has forgotten the English language, tries to escape at every opportunity, throws away her shoes, and refuses to act “civilized.” Yet as the miles pass, the two lonely survivors tentatively begin to trust each other, forming a bond that marks the difference between life and death in this treacherous land.

Arriving in San Antonio, the reunion is neither happy nor welcome. The captain must hand Johanna over to an aunt and uncle she does not remember—strangers who regard her as an unwanted burden. A respectable man, Captain Kidd is faced with a terrible choice: abandon the girl to her fate or become—in the eyes of the law—a kidnapper himself.

Years ago I read one of your other books, “Enemy Women” and always meant to try another. The description for “News of the World” caught my attention and I decided the time was now. Having finished it, I can easily see this being turned into a “True Grit” style movie. It also reminded me somewhat of another favorite western author of mine – Cynthia Haseloff. One thing I needed to reacclimatize myself to is your stylistic choice to avoid the use of quote marks for the spoken dialog. Eventually I got to the point where I barely noticed it anymore but it is distracting to begin with.

The story starts off in the Reconstruction era, hard and still unsettled times both socially and politically, with the Army now free to go after Indian captives and Texas warily moving into a new world with freed blacks. Captain Kidd spreads news to the mostly small towns of Texas in this world without smart phones or the Internet and in which many people can’t read either well or at all. He’s asked by a friend, a free black freighter, to take a redeemed ten year old white captive back to her remaining kin – her parents and younger sister having been killed in the raid in which the Kiowa took her. After four years with them, she is more Kiowa than white, desperately longing for her Kiowa family, potentially dangerous to those taking her from them and afraid at the same time. Britt warns Kidd that this is how his own boy, a year with the Kiowa himself, was when Britt found him and the rest of his family.

Kidd has always, in some way, been involved with spreading news. In his first war – the War of 1812 – he was an Army runner. Afterwards in San Antonio, he was a printer then in his next war he was again in the Army and operating a small hand press to print military orders of the day for the Texas Rangers to carry. Then he thought that by spreading knowledge he might be able to bring people together and less willing to take up arms in aggression. That belief lasted until 1861. Because of his age, he didn’t serve in the Civil War but lost all his investments forcing him to now earn his living traveling the landscape of Texas carrying foreign or East Coast newspapers from which he reads in rented halls.

He finds himself torn between sympathy for this young child facing a hard road in readjusting to a new life for the second time and also aware that her kin might not be willing or able to handle her while this is happening and slight annoyance that he’s the one stuck with the trip. The questions and comments of those who see her along the journey – why isn’t she happy now that she’s going home and back with civilized people? – just reinforce Kidd’s fears for her. The attempt by an unsavory POS to buy her from Kidd – because blondes earn better money – is another danger to be faced but one which also bonds Kidd and Johanna as they battle together to fight their way out of an ambush.

The description of the journey across the Texas landscape is as important to the story as is the developing fatherly relationship between the courtly 71 year old gentleman and the young girl adrift and lost in a world she no longer knows. I think the time devoted to showing the variations of the Texas countryside is well spent but the pace is deliberately as gentle as the 10-20 mile per day journey. The people met along the way are fascinating yet not just “characters” nor do they feel like 21st century people dressed in corsets or frock coats.

The resolution of what will become of Johanna is much as I thought it would be given the hints and the way the story develops. Really Captain Kidd couldn’t have done anything less and kept his honor or self respect. But as much as he helps her adjust to her new life, she helps him feel needed and aware of the things in life which really count. The trip to these realizations was lovely to read and well worth the time I invested, quote marks or not. A-