REVIEW: My Summer of Southern Discomfort by Stephanie Gayle 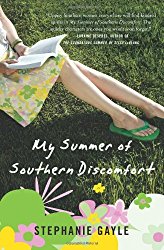 When Jane forwarded to me our copy of your first release My Summer of Southern Discomfort I wondered if she’d read it first and what she might have to say about the legal aspects of the book. And then I wondered if this was going to be a “trash the South” story. I also pondered if the title could refer to the humid, heat wave we’ve been sweltering through for most of the month of August. The answers are 1) no and not bad, 2) no and 3) yes the heat was mentioned. It’s also one of the nicest surprise reads I’ve had this year. Since I am lazy and the work has already been done for me, I’m going to steal this nice synopsis from Carol Haggas at Booklist:

Having suffered professional and personal humiliation at the hands of her boss and lover, promising young attorney Natalie Goldberg beats a hasty retreat from the prestigious Manhattan securities law firm where her career precipitously derailed from its fast track and surprises everyone by taking a low-paying, demanding, and unglamorous position as a district attorney in Macon, Georgia. Not only is Natalie a card-carrying Yankee liberal, she is also the daughter of a respected civil rights lawyer, and her sudden career change mystifies her conservative southern colleagues as much as it outrages her father. Alone in a new city, essentially friendless, and nursing a broken heart, Natalie doesn’t think things could get much worse until she is appointed cocounsel for a death-penalty case, a position that goes against everything she believes.

Since I’m not a lawyer, I don’t know if the legal stuff is accurate but it sounds believable. But then what the heck do I know about law stuff. Jane’s the law stuff person here and she says most of it sounds good to her though the thing that gave you two days of grief trying to work around is an absolute no-no. As I said above, I was afraid the book would turn into a “yankee moves south and spends the whole book denigrating the south, Georgia and the local yokels.” What a relief it wasn’t like that at all. Natalie has her moments of bewilderment and homesickness but for the most part she’s a good sport and wants to fit in with her colleagues, do her best in her job and get over her heartache.

I loved the low-key wry humor and Natalie’s amazement at Southern gentility. I was delighted at how she got over what her law partner lover allowed to happen to her without turning into a bitter woman and how she comes to realization that she isn’t gaining revenge on the partners anymore but forging her own way and looking at the positive side of the kind of law she’s practicing — helping people, gaining justice for victims and righting wrongs. Maybe it’s not her father’s kind of law but it’s rewarding to Natalie.

There are some wonderful female characters in the story like Helen the defense attorney and former Miss Georgia, Nat’s NY friend Lacey who jogs more than should be allowed and Nat’s neighbor Lala. I’d love to sit back and sip something cool in Lala’s garden too.

I especially like how Nat comes to respect Ben and Ben comes to respect her. Slowly, without great fanfare or fuss but his compliment on her cross examination meant the world to Nat and by the time we see it, we realize just how much.

I’m not sure why the subplot about Carl’s sister Sarah and her abusive husband was in the book. To provide a link between Nat and Carl? To help battered women who might read the book? I didn’t mind reading it but I am puzzled about why you included this subplot.

Though the story ends with the possibility of a romance for Nat, it’s mainly about Natalie finding herself, getting over what was done to her and coming to terms with it, her principles, her feelings for her parents and getting used to the pace of life and law in Georgia. I have to ask what the heck is with the cover? That can’t be Nat (wrong dress) but looks too young to be Lala in her garden. Is this a random Macon neighbor of Nat’s? A-

→ Jayne
Previous article: REVIEW: If His Kiss Is Wicked by Jo Goodman
Next Post: Denise Brown Backs Out of Confrontation on Oprah