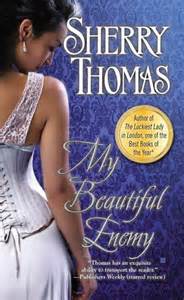 Given the current (rocky) state of my relationship with historical romance, I approached your latest book with a certain amount of trepidation. When I’m in a slump, I’m always afraid that my mood will extend to the next book and jinx it somehow (while of course simultaneously hoping the next book will *break* the slump). I did have some hope in this case, though. If my issue with historical romance is at least in part that it all feels so same-old, same-old, I thought I was in safe hands here; a Sherry Thomas book is never boring.

The story opens with an action-packed prologue set on a ship crossing a storm-tossed ocean: Catherine Blade is waiting out the gale in her cabin when she hears an unusual noise, goes to investigate and finds an acquaintance, Mrs. Reynolds, bloodied and beaten. Mrs. Reynolds implores Catherine to go after her sister, Mrs. Chase, who has fled their attacker to the deck.

Catherine, who is more adept at dealing with mysterious assassins than your average Victorian heroine, vanquishes the villain on the deck and saves Mrs. Chase. In the course of a cinematic battle involving flying doors and improbably high vertical leaps, Catherine recognizes the attacker as Lin, an enemy whom she holds responsible for the death of her daughter. Catherine had believed Lin dead – beheaded – years before. Lin disappears over the side of the ship, presumably swallowed by the sea. (Am I spoiling anything if I add a skeptical “yeah, right?” Probably not.)

The next scene is marginally less dramatic, at least on the surface. Mrs. Reynolds and Mrs. Chase are being met in London by Mrs. Chase’s daughter, her daughter’s fiance and the fiance’s brother. Catherine is with them when she recognizes the fiance, Captain Leighton Atwood, as someone she’d known years before – a man she believed dead because she thought she’d killed him. (The first chapters of the book really give the impression that Catherine is really bad at knowing when people are dead, but it’s just a coincidence, I guess, that she happens to encounter two such people in quick succession.)

The story then switches to flashbacks. When Catherine and Leighton first meet, she is known as Ying-ying, though she does not actually give him that name or any other. Both are pretending to be someone else when they meet in a desert oasis in Chinese Turkestan. He sees through her male disguise and finds himself intrigued and attracted; they travel together for a short time, in spite of her wariness of him. They part, then meet again, eventually giving into the devastating attraction between them. But the differences between them and the secrets they keep from each other lead to distrust, a resolve on Leighton’s side that they must part, and finally Catherine’s admittedly somewhat rash decision to try to kill her lover.

Catherine began life in China as the illegitimate daughter of a Chinese woman and an Englishman who died before she was born. She is raised by her amah after her mother dies, and eventually by Da-ren, her stepfather and a high-ranking member of the Chinese royal family. She is in England (in the present storyline) on behalf of Da-ren hunting for two jade tablets, part of a triptych that are believed to contain clues to a hidden treasure (I wasn’t hugely fond of this rather silly aspect of the story). Catherine has been trained in certain arts that make her well-suited to the search. Further, the last possessor of one of the tablets was her beloved, murdered English tutor. She hopes to connect somehow with her memories of him while in England, as well as fulfilling her stepfather’s wish. She never expects to meet a ghost (never mind two) from her past.

As with most (all?) of the Sherry Thomas books that I’ve read, My Beautiful Enemy switches back and forth between two time periods, in this case 1883 and 1891. I recall being surprised to learn that many romance readers don’t like this device (of course, I was also surprised, once upon a time, to discover that a lot of romance readers HATED first-person narratives; I rather like them, at least if I like the narrator). I have to say, I’m not sure I quite get what the objection to flashbacks is. I think they function well in intertwining the meatiest parts of a story with the more prosaic parts, so that there aren’t many lulls in the dramatic tension. I don’t know; flashbacks usually work for me, especially the way this author does them.

The prologue of My Beautiful Enemy put me off slightly, for a couple of reasons. For one, I felt dumped into a chaotic scene with very little context (which may well have been intentional on the author’s part): we are introduced to a heroine who is unusual, to say the least, and shortly she encounters a mortal enemy whom she’d thought dead and we find that she’d lost a child in a horrendous way. It was a lot of pretty heavy information to have dumped on me as a reader before I’d gotten my bearings (and before I felt any connection to the characters). Also, I really didn’t love the martial arts fight Catherine engages in with Lin; it felt stagy and unrealistic, more suited to a fantasy-tinged kung fu film than to the sort of romance I favor (dramatic but rooted in reality). As well, it felt a little stereotypical: our heroine is (part) Asian; of course she’s trained to kill a man with her bare hands and her ingenuity.

But I came to realize that even if Catherine has some elements to her character that somehow manage to feel to me both high-concept and clichéd, she really is a unique and fully realized character. She was born into a world where her sex marked her as worthless, and her whole life is about proving her worth to those she loves: her mother, her amah, her tutor Gordon, Da-ren, Leighton. She has as strong a sense of duty as any romance protagonist I can think of. Once she was willing to give up everything for love, and that ended badly for her and it’s marked her life ever since.

Leighton feels a bit less finely drawn for much of the book; he’s closed up in both his past and present incarnations and even when we get his perspective it’s pretty opaque. For this reason, and a couple of others, I was firmly Team Catherine when they parted for the first time (even if her trying to kill him was clearly an overreaction).

One aspect of the story that I found strange was the role that Catherine’s racial heritage does (or rather doesn’t) play. There is no indication that Ying-ying’s being half-English/half-Chinese has any effect on her status in the household that she grows up in in China. I know nothing about that time/place/culture and so can’t say for certain that it would or should have been an issue, but it feels odd that it’s never even remarked upon. After her arrival in England, as far as I could tell, none of the people she meets are even aware that she’s half-Chinese, which again, struck me as odd. I sort of wondered – why make her biracial and then do nothing with it?

While we get plenty of flashbacks between the earlier meeting and the present day story, the details of both characters’ pasts only come out in dribs and drabs and really sort of have to be put together by the reader in the end; even then some holes remained. I have mixed feelings about that; on the one hand, I appreciate not having everything spoon-fed to me (when there is a bit of an info-dump concerning the reason for Lin’s enmity towards Ying-ying, it felt awkward and out of place). On the other hand, sometimes it almost felt like My Beautiful Enemy was a sequel to another book that better explained the h/h’s pasts. For Leighton, there is a lot of business having to do with his father, mother, uncle and brother, and I think I only ever understood half of it. For Catherine, there’s her relationship with her mother, her mother’s relationship with Da-ren, her amah (who apparently had some unique talents and a violent death that I didn’t really get), her tutor (his death was similarly murky), and an evil, lecherous stepbrother whose actions actually play a rather large part in Catherine’s life but who is otherwise only barely referenced a few times.

My Beautiful Enemy had some strong parallels to one of my favorite Laura Kinsale books, The Dream Hunter. Both concern an English hero in foreign lands meeting a heroine disguised as a boy, and switch back and forth between the past and a present in which the h/h must reconcile their misperceptions of each other with reality.  For reminding me of the Kinsale book (and not paling terribly in comparison), it qualifies as a strong success. My grade for this book is an A-.

→ Jennie
Previous article: The Right to be Spoiler Free
Next Post: Wednesday News: Posner lays down the law for the Conan Doyle estate, Romance writers changing the publishing landscape, hotel charges guests for negative reviews, and taking a look at Medieval marginalia