You were easily my biggest discovery this year, and probably my favorite. Sure, I gnash my teeth and moan about the editing and the weird writing ticks that you have, but I read your books over and over and I pimp them relentlessly on Twitter. So, as I started to come up with my Top 10 for 2012, I realized that I would have to include a Kristen Ashley book. I’ve read almost all of your books,  and easily my favorite, the one I’ve re-read and recommended more than any other, is Motorcycle Man. 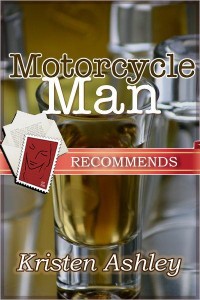 Motorcycle Man is the story of Kane “Tack” Allen and Tyra Masters. The couple meets one night at a party at Tack’s Motorcycle Club, “Chaos”. They have an immediate attraction and end up hooking up. Tyra believes she’s met her Dream Man —  right up until Tack pats her on the behind and tells her to find her own bed, he’ll call he when he’s ready to see more of her. So, needless to say, when Tack spots Tyra in front of his office (he runs a custom car and motorcycle shop), he’s not pleased. He’s even less pleased to find out that Tyra is his new office manager. But when he tells her no, in fact, she will not be his office manager, and she gets right back in his face, he’s intrigued, and he ends up letting her stay. He tells Tyra in no uncertain terms that not only will she be working for him, she’ll be in his bed as well.

Right. So these are NOT the actions of a romance novel hero. Any man who spoke to me (and I assume most readers) that way, would be headed for a quick kick in the junk or a slap across the face. And yet…Tack works for me on every single level. His pursuit of Tyra is single minded, occasionally appalling, and often very tender. Quite simply, he adores her, and he understands her issues and quirks and he goes to great lengths to make her happy. Often this is done in ways that are unconventional, bossy, and alpha-holish. He yells, he curses, he intimidates, he manipulates. So why does this work for me? I wish I knew. I think part of it is that from the beginning, I trusted that Tack’s heart was in the right place. Even having done a lot of things that were illegal, and not OK. Part of it is that he’s loyal to his friends and to his kids. Part of it is that you so successfully conveyed to me how much he was feeling about Tyra. The last part of it is Tyra. She’s strong, she takes absolutely no crap off of Tack. She reacts in ways that I could empathize with. She’s smart, she’s genuine and as she begins to understand Tack, so do we, the reader.

Motorcycle Man does have the issues that others of your books have. It could use a copy editor, as you do go long, often focusing on things that serve no purpose, like the heroine’s clothing, the layout of a house or building, or the inner monologue of your heroines, which can be mind numbing in their stream of consciousness. But man, do I love this book. I think that Tyra and Tack are the perfect couple. They have amazing chemistry, they are funny and they’re entertaining as hell to read about.  And I’m not the only one. You’ve received tons of good reviews of Motorcycle Man, and even Dear Author has had a guest reviewer, Angela James, give Ten Reasons Why You Should Read Motorcycle Man by Kristen Ashley.

While I understand that your books are not for everyone, I read them over and over, and have found that diving in to one of your books is like putting on a favorite sweatshirt. I’m comfortable in the worlds you build, and I genuinely like the characters you create. Of those characters, Tyra and Tack are my favorites which is why I give Motorcycle Man an A-.

→ Kati
Previous article: First Page: The Bluebell Girl
Next Post: Daily Deals: A variety of deals with a controversial inclusion