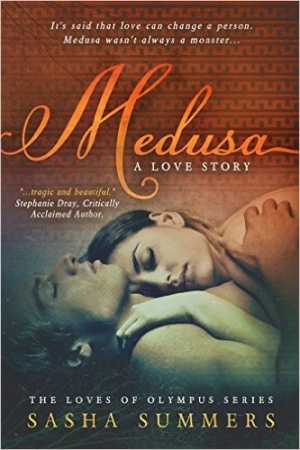 Medusa is raped by Poseidon. It takes place off page but her emotional and mental anguish is conveyed.

Medusa is ruled by duty, to her Titan father and the Goddess Athena. She’s no room for the tenderness her warrior guard, Ariston, stirs. When Olympus frees her from service, her heart leads her into the arms of the guard she loves… and curses her as the creature with serpent locks.

Ariston goes to war with a full heart… and dreadful foreboding. He learns too late of the danger Medusa faces, alone, and a Persian blade sends him into the Underworld. But death, curses, nor the wrath of the Gods will keep him from returning to her.

Way too long ago, I fell for your entry in “A Galactic Holiday Anthology.” Since then, I’d occasionally check out what you’d written lately, waiting for another space story. Well, after waiting for a while, I finally saw the first in the “Loves of Olympus” series was on sale so with a shrug and “why not,” I clicked buy. “Medusa” broke my heart, kicked it around a little and then miraculously put it back together again.

This is a world of real deities. And Greek ones are not always forgiving or kind no matter the source of their displeasure. Petulant, self serving, “it’s all about me” pretty much describes them. It’s amusing to watch the politicking, maneuvering and gamesmanship among them. Yet things can get very dangerous very quickly for mortals who happen to find themselves desired by or in the way of an Olympian.

Honestly, I’m tired of the almost endless mental lusting that substitutes for the development of physical attraction between characters in romance novels these days. There’s almost none of that here. Instead there’s a lovely, subtle way of conveying mutual interest. More emotions than merely body parts throbbing. The sexy times eventually arrive, obviously, but at least it starts less than the standard hubba-hubba fixation.

After months of yearning, when Medusa and Ariston honestly feel that their time has come, their joy in each other, their marriage and relationship is amazing. Both are honest and honorable and when they say they’re in love and pledge themselves to each other, I believe it.

This is ancient Greece and women had little agency. Medusa’s unsettled fate shows how even the daughter of a Titan has no say over her life or what is done with it. First sent by her father to pay a debt to a Greek family living outside Athens, Medusa then becomes a priestess of Athena for years. She has loved serving the goddess but longs for more. It’s her misfortune to catch the attention of Poseidon and be used as a way to spite Athena. Her years of loyalty count for nothing in a game of one-upsmanship between the two gods.

I love how the ancient Greek myths are faithfully adhered to and mixed with history and culture. The inevitable clash can be seen coming but as cleverly as it is all worked together, there is no escaping what the Fates have decreed, horrific as it is. Hints have been dropped about Poseidon’s lack of care for whether or not his sexual conquests come willingly to his embrace and of course the description of Medusa and her place in Greek myth is well known.

But it’s not just BAM and she’s a monster turning people to stone. Her transformation and dawning awareness of what has happened to her is slowly revealed. The pain it causes her as well as how she suffers at the hands of Athena and Poseidon is carefully described. She is not a monster with no feelings so much as a woman horribly done wrong who has no control over what her serpents do to men but who must live with the consequences of that. Even her Gorgon sisters take on a whole new aspect as loving older siblings trying to take care of their cherished, mortal, younger sister.

Meanwhile, Ariston battles his own death and turns the heart of cold Hades in his determination to find and be with his beloved wife. Nothing will stop him and nothing else matters. For those tired of how women are blamed for horrible things done to them, his steadfast loyalty and devotion are a breath of fresh air. In his eyes, Medusa is the innocent party and woe to anyone who has done her wrong or stands in his way of reuniting with her.

The outcome of the myth of Medusa isn’t changed. Perseus is a player in this story and the gods favor him and his quest. What gets flipped is that Medusa, for her own reasons, wants him to succeed as well as do we, the readers. But how Medusa and Ariston are to be reunited is what we’re really waiting for and it all works out and makes sense. When they are finally together again, I was wiping away a few tears and happy to have my heart back in one piece too. A-

He felt her arms slip about him as she pressed herself against him. He could not fit her close enough to him, could not stop himself from crushing her against him.

But she seemed little bothered by his unyielding hold.

“Let us stay this way,” she whispered against his throat, “until I know you are real. I cannot let you go.”

He inhaled at her temple, pressing a kiss to her brow. “I will hold you until you are done.”

She laughed, a sweet, free sound that surprised them both. “Then you will never let me go, husband.”

He laughed too, his hand cupping her cheek with tenderness. “No, wife, I will never let you go.”