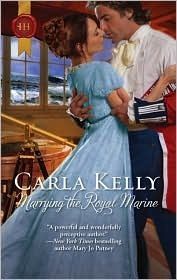 At last, at last the final book in the Brandon Sisters series. Eldest sister Nan found love with a naval Captain, middle sister Laura married a naval doctor and now it’s youngest – by quite a few years – sister Polly’s turn. But instead of the Navy, the Royal Marines provide our hero this time.

No one is quite sure how Polly Brandon managed to gain passage aboard a naval vessel to Portugal during time of war but one brief conversation with her shows Lieutenant Colonel Hugh Philippe Junot why the midshipmen who had been gathered around her were smitten. She’s not conventionally pretty and wears those wire rim spectacles but once she turns her attention on a man, it’s fixed on him. Plus she’s pluck to the bone and filled with a giving spirit.

Laura Brittles makes it clear that she disapproves of such an older man even thinking of courting her young sister yet her husband Philemon gives him hope with tales of how perseverance won Oliver Worthy and himself their Brandon brides. When a trip inland to help women abused by the French invaders turns into a matter of survival, Hugh and Polly discover that age doesn’t matter when love finally finds you.

This must be one of the most interesting ways to get to know another character – mop up duty after mal de mer – that I’ve ever read. It moves Hugh and Polly smartly past the “nice to meet you” stage and begins to show us the backbone and character of these two people. I must say though that the ‘giving of their water’ by the other Marines is a touch kitschy – plus would they have been allowed to? Give up their total daily supply?

Hugh only has a short bit of conflict about Polly’s illegitimacy but perhaps his older age accounts for that plus the severe stress they were under. That kind of sharpens your perspective on things. Plus Polly, even if illegitimate, is the daughter of Lord Ratliffe, an official “hero.” I like that “Brandon,” as Hugh calls her, never seems to notice the age difference and doesn’t discount herself due to her own age. It’s funny that Laura Brittles disapproves but that adds a touch of realism.

The chemistry between these two is marvelous. They can talk about almost anything, can laugh together, can face death together and still think of the other before themselves. I enjoy the fact that Hugh loves his career – as seen through his stories he tells Polly about India, Canada and Ceylon. Touch of realism – part two: Hugh readily admits to being a man of the world – has used seaport ladies and sees one in Lisbon. I do love how he sees the beauty in Brandon which she refuses to see herself. He sees *her* – inside and out – and loves everything he sees.

Polly Brandon grows as a person. She’s more willing to believe that she is worthy of Hugh and of someone kind falling in love with her. She also realizes that she has much to offer the wounded women who have ended up at Sacred Name convent and does more than her share to keep Hugh and herself alive during their captivity ordeal.

Though this may sound strange, I like that Polly is mad and questions why she and Hugh were put into this predicament. I think someone would have to almost be a saint not to in those circumstances. Hugh agonizes over what he’s forced to do but from what he already knows and what they saw of the priest, it was a blessing for him to be able to do it. And if Laura Brittles ever learns the whole story of what happened, she ought to give thanks for Hugh’s experience because it’s probably his age and wisdom which saves Brandon from rape. “Adventures are never as fun as bad novels make them out to be, Polly.”

When you kick in the realism of war you don’t stint. There’s no way to pussy foot around the issue without trivializing what really did happen. The way you’ve built Polly, I can see how she’d attract a military man – she’s calm, competent, grasps the details of what danger they could be in and faces that danger head on. When the moment of greatest danger comes – during guerrilleros’ attack of French, she reacts naturally for someone who’s never been under fire – she first saves Hugh and then terror hits her.

James Rothschild – even though I’ve seen him and the gold shipments used in other fiction before, namely one of the Richard Sharpe novels, it’s still fun to see it here.

And there’s sex! and more sex in this series. Yes, you can write great sex scenes. Usually “just one night of love” excuses for sex induce eye rolling from me but in this case, with death looming each day, it makes sense and fits perfectly. I totally agree with Hugh’s comic statement “Can you fathom our potential, if we ever get anything to eat?”

Hugh admires her spirit, her intelligence and resourcefulness and Polly cheerfully admits that they will probably disagree on things and squabble at times. “I have a brain; so do you.” But these two have seen each other at their best and at their worst. Have been tried and tested in the flames yet come out stronger for it. I certainly enjoyed the trip and hope to see you back again with further historical adventures soon. A-