It’s no secret that I love your books. The Winter Sea and The Rose Garden made my Best of 2010 and Best of 2011 lists, respectively, so it’s probably past time that I let one of my DA colleagues have a chance to review you. But when I heard that Mariana was being re-released in the US, I couldn’t resist pulling it out of my TBR. 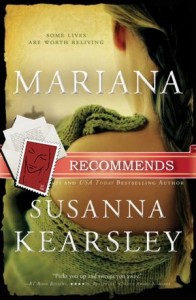 Mariana opens with a prologue in which our narrator, Julia Barrett, sees a grey stone house that she immediately realizes is “her” house. Since she’s five at the time and passes it while her family is traveling home, her parents don’t pay much attention. She sees the house, Greyweathers, twice more in her 20s, and it has the same effect. So a few years later, when she receives an unexpectedly large inheritance and Greyweathers is on the market, she buys it. Julia has never known why she is so certain the house and she belong together, but after she moves in she finds herself experiencing the life of Mariana Farr, who moved from London to Greyweathers in the 1660s and lived there with her uncle’s family to escape the plague after her mother succumbed. At first frightened that she is losing her mind, Julia seeks advice from her brother, Tom, a vicar who suggests that she might well be the reincarnation of Mariana and thus carries the latter’s memories and experiences.

Julia moves between her new life in Greyweathers and the village of Exbury, and Mariana’s life in 1665. She quickly makes friends with Vivien Wells, the owner of the village pub, as well as Vivien’s good friend (who may be more than that), Ian Sumner. Julia becomes more and more drawn to living Mariana’s life, and she experiences Mariana’s growing romance with Richard de Mornay of Crofton Hall. It makes her wonder if her attraction to his contemporary relative, Geoffrey de Mornay, the current handsome and wealthy owner of the Hall, is because he is the reincarnation of Richard. Meanwhile, Mariana and Richard’s growing and intense love for each other is fraught with danger, both because of her uncle’s plans for her and from intrigues in the larger political sphere.

There are some similarities between Mariana and The Rose Garden, even though they were published more than fifteen years apart. Like the newer novel, Mariana features a narrator who travels back and forth to an exciting, dangerous time. Like Eva in The Rose Garden and even Carrie in The Winter Sea to an extent, Julia gets caught up in the earlier era and its inhabitants to the point that she sometimes feels more attached to them than to friends and family in the present day.

But there are important differences as well. In Mariana, Julia isn’t herself in the past, but rather inhabits the body of a long-dead woman. She cannot insert herself into that world. She experiences whatever Mariana went through without the ability to change events, and some of those experiences are deeply sad. And unlike Eva, Julia seems really to enjoy her life in Greyweathers and the village of Exbury. She wants to find her own happiness and contentment in the present day. She grows attached to Vivien, Ian, and the other residents of the village, and she has a strong bond with her brother, Tom. Sure, she wonders if Geoffrey is the reincarnation of Richard, but I got the impression that was because she was somewhat attracted to Geoffrey, not because she was trying to recreate Mariana’s life.

I enjoyed the reincarnation storyline. It’s not how I envision reincarnation to work (hey, I’m Hindu, I had the Official Version drilled into me early), but I liked the way it was presented in the book, and it made sense as a device. It also means that the reader looks for Mariana/Julia’s partner in the present day. Geoffrey seems like a reasonable candidate, but for much of the book the romance doesn’t seem quite there. Julia’s relationships with Tom and her new friends seem at least as important if not more. I really didn’t know how you would resolve the loose ends, but the last pages rewarded me immensely. I cannot say more for fear of spoilers, but readers, if you’re a peek-at-the-end type, don’t do it. Just don’t. I promise you, though, that you will believe it is a worthy successor to the love Mariana and Richard shared in their era.

I really enjoyed the various relationships in the novel. Julia has strong relationships with women in the present as well as in the past, and her relationship with her brother Tom is a pleasure to read. I get tired of stories in which the hero and heroine only have eyes and ears for each other. And Julia has a real career, one that brings her a great deal of fulfillment. Even when she is immersed in the past, her professional obligations are always part of her consciousness.

The historical context, as always, is first-rate. You evoke the tone and rhythm of earlier speech without using dialect, and you demarcate the different eras’ worldviews subtly, through language and characterization. The writing isn’t quite as polished as in your later books, but there is a directness and emotional immediacy in the reading which more than makes up for it.

And oh, that ending. It’s why I read romance. Grade: A-

If you are interested in this book, Sourcebooks is giving away 5 print copies and 5 digital copies.  Please fill out the form and you’ll be entered to win one of the ten copies:

Updated with winners. The names are truncated to protect their email addresses but they have all been contacted: