I have to confess: I have copies of the entire Kate Daniels series in both ebook and paperback form, just so I can read them anytime if I want to. For me, they are total comfort reads. To me, they write the perfect combination of urban fantasy, emotional realism and humor.

So as you can expect, I’ve been looking forward to the next installment of this series, and after reading it, I am pleased to say that I can definitely recommend it. 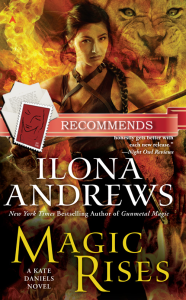 Kate and Curran are pulled out of their Atlanta home territory and into the muck of European shapeshifter politics. Desandra Kral is the only daughter of one of the most powerful alphas in Europe, and carrying the twins of two other high ranking alphas in Europe (each a child of different fathers). Since her firstborn will inherit an important strategic pass, the three European packs call for Curran to come as an impartial mediator and guard. Dangled before the Consort and Beast Lord is a European medicine that drastically reduces the chances of shapeshifter children completely losing their humanity and needing to be destroyed, which unfortunately happens to most shapeshifter children. It’s an offer that neither Kate nor Curran can refuse. Though the pair head overseas expecting a trap, it turns out that neither are truly prepared for the real reasons they are wanted in Europe.

One of the things I love about this series is that supernatural creatures aren’t just limited to garden variety werewolves. We have Babylonian lamassu, Greek shapeshifting dolphins and ochokochi of Colchis. Moreover I like that there is definitely a shapeshifter culture that informs their actions and personalities, rather than them just being humans who happen to don furry coats every once in awhile. When Kate arrives, she’s attacked by a mysterious winged, scaled feline creature that turns out to be an unknown shapeshifter, or so the other packs claim. Delving deeply into myths of scaled felines in various cultures lead them to the Babylonian lamassu, which everyone claims is ridiculous until it’s not.

Typically this series draws upon the myths and stories from various cultures which makes for more inclusive and realistic worldbuilding. I find that this series is one of the few that does diversity well without beating the reader over the head with a diversity bat. However, this book generally drew upon European mythologies, like Greek and Slavonic, which I suppose makes sense, since they are in Europe. But the Europe they portray reminds me a little more of a medieval wilderness than the modernly diverse Europe I’ve traveled. Still, if America is diverse, I didn’t see any reason why this area of Europe wouldn’t be as well.

While Kate investigates, shapeshifter princess of the U.S’s other most powerful pack is busy sniffing around Curran. Honestly, I’ve never been a fan of the jealousy-between-paired-lovers / why-aren’t-we-married storyline. I think it worked a little better here because she wasn’t instantly jealous. Kate mostly tried to give Curran the benefit of the doubt until she couldn’t anymore. But on the other hand, the previous books emphasized how shapeshifter mating practices were not like humans and that “to mate” meant a shapeshifter marriage. It seemed odd to me that the human version of the marriage would now be important other than as another way to turn up the tension.

Maybe because it felt like a trope, I felt that the emotional tension and issues between Kate and Curran was just not as strong in comparison to the other conflicts in the book. In fact, I thought there was more interesting stuff going on between Kate and the main enemy in this book. As a long time reader I thought that Kate learning more about the death of her adoptive father and the evolution of her feelings toward who he had been had more resonance. It was more interesting to see Kate’s evolving sense of who she is and coming to terms with living the life she had always been warned not to live. Still, Kate and Curran’s relationship development and resolution was definitely satisfying from a romance reader perspective.

I always felt that secondary characterization was one of the stronger aspects of this series. The interaction of various unique personalities not only makes for great humor, but really made each character stand out. For instance, the introduction to the mistreated Desandra paired nicely with the later revelation that she was actually an intelligent figure and also made her emotional journey come together nicely. In addition, the ultimate fates of some other long-running characters became some of the more emotionally vivid and visceral parts of the novel.

Reading this made me want to go back and reread the previous books because there were certain things that I had just forgotten. I think there’s enough here for the first time reader to get into the world, but this is definitely a must for Kate Daniels fans. As an urban fantasy, I think the story deserves an A- but if you’re reading primarily for the romance, I would say B+. I still can’t wait for the next one.