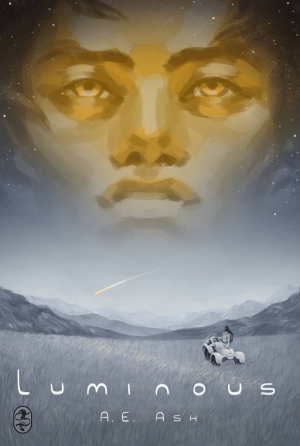 I have always been a little envious and a lot awed by those who can write short well.  I think it takes a special skillset to convey a complete story in few words.  There is no time for character exposition or much by way of backstory. The shorter the word count, the more…concentrated the story has to be.  All the essential elements must be there for it to succeed but the short word count necessarily distils the story to essentials and, I think in such places, flaws and random particulates are far more noticeable. There are no extra words to obfuscate mistakes and no rugs to hide plot bunnies under. It seems very brave to write that way. Examples such as Luminous are beautiful in their clarity.

Jyothi has been alone on the planet Hestia for nine years. She is 63 and very very lonely. Each day she clings to her routine; my sense was it was a way of clinging to her sanity and not giving into despair.  One night, she has a dream unlike any other dream and the next morning, she breaks with routine, leaves her helmet* in the cargo bay, lets her hair down and rides her space buggy west towards the light.

What she finds there, gives her a reason to live far better than routine and invigorates and renews her.  I don’t really want to say much more about the plot because the story is short (just over 20 pages on my reader so it’s not a huge time investment) and the joy of it is watching it unfold and discovering, with Jyothi, unexpected pleasures.

In some ways it read to me like a fairy tale and because of that, I didn’t require any drawn out courtship or close examination of the reasons for falling in love.  I could accept that love existed and I could do so in such a way that it didn’t really matter to me what kind of love it was. There are no explicit scenes and it definitely read like a romance (complete with HEA) but my sense was that the companionship and, perhaps the ability to touch and be held, were the main priorities. The story was no less romantic for it.

It is not explicitly stated, but Jyothi is, I think, of South Asian heritage. Her skin is brown and she has dark eyes and long black hair, silvered with age. Her ethnicity was both intrinsic and unimportant.  The former because it was clearly an essential part of her but unimportant because in Luminous, Jyothi is the only human so she stands, in a way, for all humans. It wasn’t necessary for her to have a non-Caucasian background but I liked that she did and I liked that it was just there on the page, not having to be justified or explained. How wonderful for “human” to be represented by an older woman of colour?

I’ve been watching Masterchef lately and seeing some talented professional and amateur chefs put these gorgeous finishing touches on their dishes. Little flower petals or tiny sprigs of dill or fennel.  Your story had these same kind of wonderful flourishes throughout. Touches of colour and flavour which stood out so well against a sparse background of the grey, treeless planet of Hestia and Jyothi’s lonely existence.  Her memories of Eka are poignant and speak so eloquently, but in so very few words, of a meaningful and deeply felt love, lost and still aching and tender.  Jyothi’s own feelings of worthlessness due to her age and circumstance too are highlighted this way.  Just enough so the sense of it permeates the story but doesn’t overwhelm, all the flavours perfectly in balance.

Given that it is a romance, I don’t think it is a spoiler to say that there is another who joins Jyothi.  I loved the syntax and cadence of his speech as he gradually learned a more “human” style of communicating, as he gradually became easy in his new incarnation. And his solution to their problem was beautiful and perfect and fitting.

(I did have a question about Jyothi’s helmet because I am the type of reader who notices these details. I wondered why she wore it every day for nine years when she was exploring if she did not have to wear it for reasons of protection from the atmosphere. But perhaps I was thinking of the wrong kind of helmet and it was just a motorcyle-type helmet rather than an airtight space helmet?)

Because I viewed Luminous as a kind of fairy tale, I felt that the ending was right too.  It doesn’t detail what their HEA will look like but I was nevertheless confident they would be content and happy together and I had far more actual evidence of it than I would from say, Sleeping Beauty.

I loved the spare style of writing and the little flourishes of flavour and meaning through the story. It’s the kind of short story I can imagine reading again and again, getting something a little different out of it each time.  It is the kind of story I’d recommend to just about anyone.

Luminous is published by The Book Smugglers and can be read for free online here.  The ebook is available for purchase also, and includes bonus content: a Q&A with the author and short essays on the inspiration for the story from the author and on the (brilliant) cover from the cover artist.