He’s used to getting what he wants

A former football star and one of Chicago’s top prosecutors, Assistant U.S. Attorney Cade Morgan will do anything to nail a corrupt state senator, which means he needs Brooke Parker’s help. As general counsel for a restaurant company, she can get a bug to the senator’s table at one of her five-star restaurants so the FBI can eavesdrop on him. All Cade has to do is convince Brooke to cooperate—and he’s not afraid to use a little charm, or the power of his office, to do just that.

and what he wants is her.
A savvy businesswoman, Brooke knows she needs to play ball with the U.S. Attorney’s office—even if it means working with Cade. No doubt there’s a sizzling attraction beneath all their sarcastic quips, but Brooke is determined to keep things casual. Cade agrees—until a surprising turn of events throws his life into turmoil, and he realizes that he wants more than just a good time from the one woman with whom he could fall terrifyingly, irresistibly in love . . .

This book is our Book Club pick so comments are closed.  Please join us over at the Book Club Discussion Thread.

This! This is the kind of book I’ve come to expect from you and so sorely missed the last time. This is what I look for in a contemporary romance: great characters, a believable blend of romance, funny dialog that all comes together in a story that flows with feeling and depth to it as well. It’s damn near perfect. 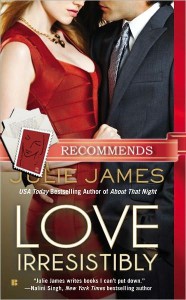 Cade Morgan and Brooke Parker are two lawyers who fall in love but it takes a while to get there. Their opening meeting sets the stage for what’s to come. He’s tall, dark and gorgeous, has a “prosecutorial, I-ask-the questions-I-don’t-answer-them” look and isn’t shy about throwing around being an AUSA to get what he wants for his investigation. She’s blonde, leggy and beautiful and isn’t shy about conveying to him that he can kiss her ass and telling him what he can do with his obstructing justice threats – something that makes the two FBI agents he brought with him to the meeting grin. I was impressed by how the power balance is maintained between them professionally. They feint, they dodge, they impress each other with their legaleze and the sizzling heat starts to build. Both are busy at their jobs, have friends, work late, text a lot – in other words, they seem like real people of today.

The damn-this-is-some-hot-sex is great and fun and funky with the red heels and lawyer skirt Brooke wears. She and Cade prove it is possible to have melt the sheets sex with her in a pencil skirt. The timing of the start of their sexual intimacy seemed just right – they don’t immediately springboard into shagging each other senseless but they are healthy adults who believe in benefits. I like how it is part of their growing relationship. It starts casually but moves toward something deeper like the scene where Brooke takes of Cade’s sore shoulder and then turns that into foreplay.

A contemporary can’t just be all sex, sex, sex, sex for me. I want more. Brooke and Cade are developed as people instead of coming off as character checklists. Their pasts do affect who they are now. She feels driven to succeed partly because of all that her parents gave up to further her education and chances while he is reluctant to let anyone in because of how his father panicked and left when Cade was a child. But the great thing is you don’t make these issues the be-all, end-all of who they are or make them all overly angsty and tied up in mental knots about it. Instead it shows subtlety and gives them shading and depth which takes them beyond merely two dimensional. One of the strengths of the book is how they slowly develop as a couple while accumulating inside jokes, sharing their pasts – including things they’ve never told anyone else – and the intimacies of their lives.

I love it when they get all lawyerly and “legal speak” each other which even impresses the FBI dudes. Being lawyers is big part of their lives (yippee that Brooke isn’t a trial lawyer!) and you show this. I assume that all the legal stuff is legit. Brooke is a confident, smart, determined workaholic who hasn’t felt need to curtail that for past relationships. When she does sit down and take stock of how this is impacting her life (first) and possible relationship (second), I didn’t feel as if she was selling out for love or that she caved to the feeling that she couldn’t have it all. The fact that she got to dictate her terms and came out ahead while scoring more time for her personal life was awesome. Cade’s past as a star quarterback who let football stand in for his lost relationship with his father has colored how deep he’s let relationships get. It takes a blast from the past to open his eyes to it but in the end, it helps him to take the plunge to let Brooke in and to want to be let into the inner circle of her life. And at the risk of sounding like a broken record, again I like how this signals the change in their growing relationship.

Since this is the fourth book in the series, there are a lot of past characters and given that most of them either work as lawyers or FBI agents, it would seem strange for them to not be part of this book’s universe. We get caught up with many of them but for the most part get the rundown without it taking over and making these characters seem like they’re jumping up and down, waving their arms to be noticed. The one exception seemed a little strange with Cade being given a blow by blow account of a marriage proposal in a conversation that felt as if it should have been between Cameron and Rylann. Yeah, that is as sexist as it sounded but the scene coming from Rylann to Cade felt awkward.

My review of your last book whinged on about what I felt was the lack of conflict. Here I didn’t notice a lack. The main focus of this book is on the building of the relationship between Cade and Brooke. It centers more on the inner barriers that they must overcome rather than any external ones. It’s a quieter book than the ones featuring active FBI investigations as the central action but I found it richly rewarding with all the aspects coming together to show the story of two modern people, stretching and growing as individuals even as they meld together as a couple. A-