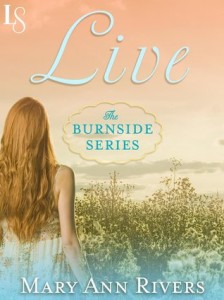 After falling in love with the beautiful novellas, The Story Guy and Snowfall, I basically resolved to read whatever you write. This is not going to be a hardship, what with the achingly lovely way with words and the sort of compulsively disarming meet cutes these books deliver. I honestly have no defenses at my disposal at that moment when these characters first come into contact with one another. From highly suspect online singles ads to increasingly confusing chatting with anonymous macro photographers, I am all in from the first page. And Live, of course, is no exception. Des and Hefin meet in a library, for heaven’s sake. And they just watch each other. For months. I can’t . . . well. I mean . . . and it was good, right? This is the first in a series featuring Des and her three siblings–the remaining members of the Burnside family. I look forward to each one.

Privately, she called him The Woodcarver.

Which, very strictly, he was. Or at least, she had actually seen him carving wood, and talking to other people about carved wood, specifically the carved-wood panels and decorations that were under restoration in the atrium of the library.

Even more painful—if pain was a sweet ache that felt good when you worried and pressed at it—she walked by his work site every single day.

As close as she dared without his noticing.

Destiny Burnside has been faithfully chasing her way out of unemployment for months now. Every day she puts in her time at the local library, job hunting, getting her paltry resume out there. Every day she gets her form signed, keeping her chin up despite the attendant humiliation and fear. And every day she passes by the all-but-silent man in charge of the library restoration and looks. Hefin Thomas is, among other things, a woodcarver and a Welshman (I know). He came to America as part of a whirlwind marriage and found himself rather summarily unhappy, quickly divorced, and working contract jobs until he could figure out what to do next. Every day he’s watched the ginger-haired young woman pass through the library, and every day he’s found his eyes drawn to her despite himself. Then one day he hears her crying. And it’s more than he can do to ignore her. His unexpected words of comfort initiate the kind of problematic relationship neither of them wants to deal with, as Destiny’s suburban Ohio roots are deep and Hefin has been resisting the call home to Wales for far too long.

I kind of feel like I’ve said enough, but there’s so much more to Live than an out-of-work daughter of a limo driver and a homesick Welsh woodcarver. Not that I’m saying there needs to be, because, well, out-of-work daughter of a limo driver and homesick Welsh woodcarver. Ahem. But there is. Des’ love for her family is behind everything she does, both to her credit and to an unhealthy degree. Her mother died when the kids were younger, and her father’s death (followed by her headstrong sister Sarah’s terrible accident) sent the four of them into a tailspin from which they have yet to recover. Forced to sell almost everything she owns, living on the generosity of a longtime family friend and neighbor, and driving her father’s failing limo to get where she needs to go, Des’ life is circling the drain when Hefin finally walks up to her and asks why she’s crying. But then Hefin’s history is equally as grim, or rather his recent history is. The painful dissolution of a marriage that was both impulsive and lovely has left him well and truly broken. The blame he places on himself makes living in any full sense of the word impossible. Neither of them have enough available appendages to hold onto the other, and I sat mesmerized as I watched them try and fail and be devastatingly honest with each other throughout.

That honesty characterizes each of their interactions, making for an impressive verisimilitude. It’s something I admire about Rivers’ writing. Her characters, they fall in love the way we do. They learn frank and not always lovely details about each other as they fall, and they are often actually drawn to some of those less-than-perfect details. Like knobby knees and hair in natural places. It’s not only refreshing, it increases the intimacy between reader and character. Along with that, when someone who used to be outside makes the transition to inner circle and points out troubling aspects of the way we lead our lives, it makes us feel hunted, uncertain, guarded. The same is true for Des and Hefin as she learns more about how he coped (or failed to) with the end of his marriage and career and as he becomes privy to the way the Burnside siblings often combine lashing out and love into the same repetitive gesture. These rich interactions and gradual enfolding of each other’s lives worked so well as I got to know Des and Hefin more. I like that I didn’t always know which way the wind would blow, or in fact which way I wanted it to in the end. I could see so clearly what they needed and wanted them each to have it individually, if collectively was not possible.

She took out an apple wedge and toyed with it. “But you grew up in Wales, right? In Aberaeron?”

Her pronunciation was perfect and he tried not to imagine her practicing it. “That’s right. And Aberaeron is tiny. My mum could call me home to tea from across town. I didn’t need a prospect from which to see my whole life, I could see my whole life from any point I stood in the village.”

“I elected into a university training program in engineering after taking some time with prerequisites at a local college. I went to London for a year, then to Beijing for almost three.”

“Oh. Wow. I went to Toronto for a class trip in high school, and sometimes my parents took us kids to Pittsburgh to see my grandparents and the Mister Rogers exhibit at the Children’s Museum.”

“Any place can be exotic when you’re away from home.” He looked down and realized he had used the handle end of his fork to press in a design of ropes and knots into the top of his Styrofoam pancake box, his hands distracted while he talked. Des reached over and traced over it with her fingers, softly.

“That’s so pretty. I could hang it up in my house and people wouldn’t even know it was a pancake box.”

“I’ll draw you something better than a doodle on a pancake box.” He closed his eyes, willed the blush away.

“You don’t have to, but I’d like that. Your carvings are so good I can’t believe they’re even real.”

“Let’s eat.” He resisted pushing the heel of his hand over his heart to make it slow down. “Is that all you have, then?”

She shook her head, like she was saying no, but then met his eyes, and hers cleared. “I mean, yeah. PB&J, favorite of six-year-olds and the long-term unemployed everywhere.”

He started popping open his boxes. Glanced up at the whitecaps on the lake. Let himself look at her again, tried not to count the numbers of freckles in the hollow of her throat. “I guess you’d better share with me, then.”

She touched her throat, like she knew where he was looking. “Pancake me,” she said. And he laughed. Helpless.

This is the first full-length novel I’ve read from Ms. Rivers, and I wondered, as I often do when I read an author’s novellas first, how she would make the transition to the longer format. By and large, I felt it was a very smooth transition. One of the primary themes in Live is how sometimes the entire arc of a relationship can be a form of saying good-bye. And while I resonated with that on many levels, it did pall a bit as the two principals are both so profoundly inward-facing and the story wound on and resolution seemed farther and farther away. But as that is my only complaint in such an elegantly layered story, I definitely feel as though I came out on top. As always with Rivers books, I feel grateful to have read these words. A-