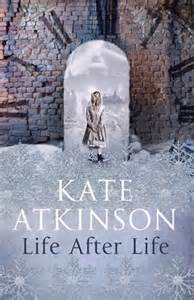 My aunt lent me this book; she and I do not usually have the same literary tastes, hers tilting strongly in favor of endless novels of the Tudor court (I think she could name the kings and queens of England, and most of their relatives, in her sleep). Life After Life was something a bit different for her, as it was for me.

In February 1910, in a modest English country home called Fox Corner, a baby is born early. The doctor hasn’t arrived, due to a snowstorm raging outside. The child’s father is away on family business. The child’s mother, Sylvie Todd, has only the family maid, Bridget (who is all of 14, and new to the position), to rely upon. The child, a girl, comes too quickly, with the umbilical cord wrapped around her neck, and dies before she can draw her first breath:

The little heart. A helpless little heart beating wildly. Stopped suddenly like a bird dropped from the sky. A single shot.
Darkness fell.

In February 1910, Dr. Fellowes arrives at Fox Corner just in time to save the child later christened Ursula Todd from dying at birth. He’s able to make the trip just before the roads close due to bad weather. It’s a good thing that he’s there, as Ursula is born with her umbilical cord wrapped around her neck. But Ursula is saved and thrives until June 1914, when on a family holiday, she drowns at the beach.

In February 1910, Ursula Todd is born. She grows up to be a vigorous and happy child, despite the fact that she’s almost lost at birth (the umbilical cord wrapped around her neck) and again is rescued from drowning at four while on family holiday. An amateur painter who has set up his easel on the beach notices Ursula in the water and saves her.

Life After Life poses the question, “What if we had a chance to do it again and again, until we finally did get it right? Wouldn’t that be wonderful?” Ursula does have that chance, though I’m not sure she finds it that wonderful; she experiences a fair amount of suffering, usually before dying an ignominious death.

The book spans the bulk of the 20th century, focusing particularly on Ursula’s growing-up years (marked by the Great War and the subsequent influenza epidemic) and the horrors of the London Blitz during World War II. The latter calamity takes Ursula several tries to live through intact (and honestly she never really seems quite alright, afterward). The blitz is vividly and grimly brought to life, almost too much so for me; it’s heavy stuff.

I want to be clear; Life After Life is not a romance. Ursula has various relationships in her sundry lives, but most of them are not particularly romantic – an abusive marriage, an adulterous affair, another marriage to an ambitious Nazi, some hasty and furtive couplings performed in the shadows of war. Ursula is not particularly romantic minded, at least not after about age 16, an age at which she has vague romantic longings for (and in one lifetime, a bit of a secret romance with) a neighbor boy. (Her mother would not approve; the boy is Jewish.)

Despite the lack of romance, the book that Life After Life vaguely reminded me of was The Time Traveler’s Wife. I almost added a “time travel” tag to this review, though Ursula does not, strictly speaking, time travel. But her repeated “do-overs” do in essence give her some of the chances that a time-traveler might have, even if she’s not always fully aware of them.

That said, there is a sense that as Ursula goes through her incarnations, she’s trying to get things “right,” particularly later on, as she becomes more aware, at least on some level, that she’s lived this all before. The blurbs I’ve read for the book often suggest that “getting it right” might mean stopping Hitler in his rise to power, and the book does play with that idea. But it’s not the driving force of the story: most often “getting it right” just means not dying the way she died in the previous incarnation; in one case it means avoiding a disastrous assault that ruins her life and leads indirectly to her death several years later.

One of the things I wondered about  (because a book like this seems suited for being thought over and picked apart) was the fact that in each life, it appears that Ursula gets a little further. She manages to avoid or prevent whatever series of events resulted in her life ending the previous time. Sometimes this means trying to change the actions of others, as when she tries repeatedly to stop Bridget from going to London with her sweetheart for end-of-war celebrations that ultimately introduce the deadly 1918 influenza into the Todd household.

This makes a certain amount of sense (given that we know Ursula is on some level aware of her previous lives), except when you take into account her first death, over which she had no control (you could argue the same for the drowning, though at least then she was a sentient being and may have done something just slightly different in order to capture the attention of her rescuer). So what I wondered was: how in control is Ursula of her own destiny?

I found Ursula’s consciousness of her past lives fascinating. Often she’s just nagged by a strong sense of deja vu; at other times, memories pop up as fully formed thoughts. In one scene, late in the book, Ursula is seeing (for the first time in this incarnation) the psychiatrist she is sent to by her parents, who are concerned about her strange behavior. Without thinking, she asks Dr. Kellet about the absence of a picture of his son Guy, killed in World War I, which she expects to see in his office. He replies, “Who is Guy?” which presents the intriguing possibility that as Ursula’s life changes with each incarnation, so do the lives of others. Whether these changes are incidental or somehow affected by Ursula was unclear to me (I mean, obviously Ursula doesn’t control the universe, nor is she at the center of it). Late in the book a beloved character thought shot down in the war turns up alive, which hadn’t been the case in previous lives (those where she had gotten past the end of WWII). I thought perhaps Ursula had let herself die in order to come to an incarnation where the other character did live, but I couldn’t figure out how (or if) she was supposed to have any control over his life or death, or she was just going to die as many times as it took for something to change.

Life after Life is richly populated with well-drawn secondary characters: Ursula’s mother Sylvie, not terribly maternal and vaguely dissatisfied with life; her father, Hugh, who first appears through Sylvie’s eyes as a bit bumbling and bourgeoisie (Sylvie’s family fortunes fell after her father died unexpectedly), but who ultimately comes across in Ursula’s view as one of the kindest, wisest and gentlest characters in the book. Ursula is very close to her sister Pamela, a stalwart ally against their older brother Maurice, who is the most consistently unlikable character, rude and self-important from boyhood through middle age. Ursula’s feckless Aunt Izzie is a vibrant character – she does swoop in and rescue Ursula a couple of times, but mostly serves as an object lesson on living irresponsibly and landing on your feet.

Life after Life is a serious book, but it’s leavened by a particular, droll British sense of humor throughout. It was fun to see some of the bits and motifs that recurred through each life, such as the less-than-stellar veal a la russe that the Todd’s cook, Mrs. Glover, insists on serving to the family.

I am in the strange position of recommending this book while still kind of warning off traditional romance readers. Not that I’d discourage anyone from reading Life after Life; perhaps it’s just that it has a very slightly downbeat quality for me that I think makes it unromantic in both the smaller and larger senses. Still, it’s engrossing and original, and my grade is an A-.