A few YA authors here and there have been writing stories that cross the boundaries of New Adult and Young Adult – they’re either a little on the mature side in characterization and/or situation to be YA for some publishers, or they’re a little younger in voice than other NA novels on the market. Either way, these authors have been using self-publishing as a way of finding a place for these stories. Your book Letters to Nowhere is exactly this: a YA novel with mature characters that is entirely unlike anything you’ve currently published, being entirely without time travel and an attached mystery. The only commonality is the strong romance, and that (luckily) has remained. 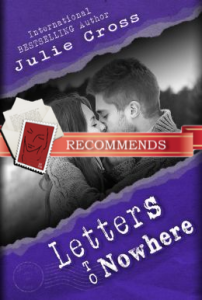 Letters to Nowhere by Julie Cross, recommended by John

Two dead parents and a life turned upside down. Karen, lifelong gymnast with ambitions as strong as her resilience, has to try and survive after her parents are killed in a car accident one night. Her grandmother is her only real family left, yet said grandmother lives across the country. Moving across the country spells the end for Karen’s gymnastics career. Switching up coaches could mean stalled training, adjusting to yet another new coaching style, and maybe losing her chance at competing in international competition.

Karen’s coach doesn’t know her too well – he’s fairly new to the gym, replacing the old coach that left to coach college gymnastics at UCLA – but he’s willing to take her in for the year so she can complete her training without upsetting her progress. Her online schooling could continue on as usual, and Karen’s grandmother would still keep track of all of the financial and legal decisions. Her coach would simply take on the role of legal guardian for specific cases. He has no intention to infringe on Karen and become her new father; he just doesn’t want her to lose an opportunity she’s wanted for years.

Living with her coach proves to be as awkward as it is convenient. His son Jordan is a surprise, to say the least. Karen’s devotion to gymnastics has kept her out of the dating and social scene. She’s no introvert, but it’s hard to search for teenage boys to date when you’re spending a huge chunk of your time conditioning for gymnastics. Jordan may not be the most comfortable person to live with, but he seems to understand where Karen’s coming from with her grief. Panic attacks and anxiety-filled nights plague her regularly. She can’t stop envisioning her parents, the accident, a human head rolling away from it.

She was never told the details. All she can imagine is the worst, and it haunts her at every moment. As she continues to train and improve, Karen also has to deal with the lingering goals she set up with her parents at the beginning of the year: don’t push too hard, clean up her routines, and go early to UCLA to compete on the college level for a full ride. The catch is that doing so would ruin her chances at competing internationally, at competing on the Olympic level someday. Through every concern, Karen seems to turn to Jordan, and before she knows it she’s falling for someone that she has no place falling for, all in the name of figuring out where her life is without the two people she loved most.

It have the feeling that the self-published books that I’ve read and enjoyed have tended towards the angsty side of things – not necessarily with the relationships provided, but with the other extraneous things going on outside of the romance. Letters to Nowhere isn’t nearly as depressing as Suicide Watch was, but it has the same focus of a broken character who is effectively more ‘mature’ than most teenagers her age, one who is between high school and college. It’s an interesting period of suspension in the character’s life, especially when it involves a traumatic event. I think that Letters to Nowhere balances the angst well by using the romance as a way to buoy the harder feelings brought on by Karen’s anguish and guilt.

Balancing that angst works well with Karen’s voice. She’s very together when it comes to gymnastics and schooling. She may have issues with deciding her future, but those are issues connected more to her parents than to her own understanding. She looks at things with logic and uses that logic as a way to get through her grief, sticking to her dietary plans and making a point to detail the gymnastics work she does throughout the narrative. The logical thought process is supported enough frequently that it’s believable without being a huge “thing”, and it also allows the romance to proceed in a way that isn’t overdramatic. By contrast, the parts dealing with Karen’s grief, panic, and depression regarding the accident are extremely emotional and contrast with the rest of the narrative in a way that makes the emotions feel all too realistic.

Her romance with Jordan is a relief in comparison to everything. He has a past that gets revealed slowly throughout the book, a past that connects to his dad and makes his dad a great character, too. There’s an appropriate amount of angst and bad-boy in said past to make him appealing to today’s reading market, but for the most part he’s a sensitive guy that easily captures your heart. I liked how he worked with Karen to overcome all of the emotional shit in their lives, even when it wasn’t intended to be romantic. That’s what endeared me to him as a reader – that focus on Karen’s well-being throughout the narrative. They also had great dialogue, interacting with a lot of humor and general adorable-ness. I loved this scene in particular, where Karen recounts a memory of her father. The understanding between these two characters got to me every time.

“‘You used to do a double layout,’ Jordan said.

My eyebrows shot up. ‘Been looking me up?’

He grinned but didn’t confirm or deny it. I exhaled and continued my story. ‘Anyway, I’d switched to the double front and he thought I’d just peeled off and was heading neck first for the landing mats.’ I wiped a tear from my cheek and smiled at Jordan. ‘I guess that’s not exactly a great memory, but I’d never seen my dad so worried before about me before and later, when we went out for dinner, we laughed about it a lot. Apparently he jumped out of his seat and someone had to yell at him to sit down. It’s not like he could have leapt through the stands and caught me or anything.’

‘I like it,’ Jordan said. ‘If it made you laugh, that’s a good start. Much better than screaming.’

‘Yes, I learned that from Monsters, Inc.’

Your plotting is well-paced emotionally, and I think the outside factors involving gymnastics were handled well, too. Your history with them is obvious with the amount of detail that you put into the exposition regarding all of the gymnastics moves Karen was doing in the narrative. It may get old for readers who aren’t into it at all, but it shows a passion for the subject and feels like more than a way to show off the knowledge you as the author have on the subject. It worked well in giving the narrative extra depth beyond all of the emotional stuff, which was the best part of it.

The subplot with one of Jordan’s friends was a misstep for me. I liked that you made him a reoccurring character and made him useful to Karen’s development, yet I didn’t like how his own personal issues were barely touched upon and felt very common for side characters that go through said issue in YA and NA. Diversity is always a plus, but the rest of the story expanded on everything in detail and made it more than the common stereotypes, so I felt disappointed that the route of this character’s issues was so traditional in comparison to the surrounding characters.

The premise itself, while made to be believable by the storyline and the realism within it, is a little hard to swallow at first. You address the issue of Karen living with her coach well as it goes on, but I think it’s something that’s going to require a suspension of disbelief for other readers, especially with how sensitive of an issue it is to have a teenager to make any non-professional connection to someone that is supposed to be a mentor, teacher, or coach. I was able to appreciate the way it was handled, but it did have me worried when I initially started the book.

Letters to Nowhere was just a book that worked so well for me personally. The grief, the happy romance – it all had a way of working together to make an excellent whole. Some of my issues with it were minor, reflecting my hope that everything in the book would be treated with such finesse and expertise. It’s a great foray into the world of self-publishing with its clean writing style and editing, the characters sweet (they don’t go beyond some sexy kisses in this one, folks) yet mature. It’s a great read for someone looking for a YA mature enough to handle, or a book that would work for an NA reader who wants something more cute than erotic. Either way, they’re in for a great read. My final grade is an A-.