REVIEW: Leonard (My Life as a Cat) by Carlie Sorosiak 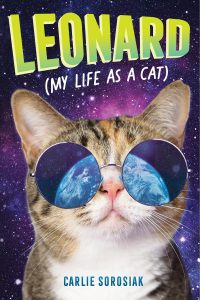 He’s not a stray house cat, he’s an immortal being. And now he must choose whether to return to his planet or remain with his new human friend in a humorous, heart-tugging story from the author of I, Cosmo.

The cat that Olive rescues from a flood has a secret: he’s not really a cat at all, but an alien who crashed to Earth on a beam of light. The cat, whom Olive names Leonard, was prepared to visit the planet as a human—but something went wrong. Now Leonard may never know what it’s like to hold an umbrella, go bowling, or host a dinner party. (And his human jokes still need some work: Knock, knock. Who’s there? Just Leonard. It is me.) While Olive worries about whether she will have to move after her mom and her new boyfriend get back from their summer vacation, Leonard tries to figure out how to get from South Carolina to Yellowstone National Park, because if he’s not there at the end of the month, he’ll miss his ride home. But as Olive teaches Leonard about the beautiful and confusing world of humans, he starts to realize how much he cares about this particular one. A sweet and dryly funny story about what it means to be human—and what it means to be home.

Yeah so I just went with it when I saw this cover and read the blurb. Secretly I’ve often wondered if cats truly are space aliens sent to observe us so of course when I realized that Leonard really is a space alien, well …. I had to read his story. As Janine wrote in one of her reviews, one of our former reviewers (miss you Jia!) said every novel gets a gimme and this one gets a bunch that I’ve been saving up but for Leonard, yes – a 1,000 gimmes are too few. I love Leonard even though his knock knock jokes need a little work.

So just accept that Leonard is from a planet with mental hive existence. Immortal beings from it apparently get to visit planets for a month as any thing or any one they want in order to gather information, expand their mind, and keep an eye on the galactic neighbors. For that month, they experience life there and then on a prearranged dot, get picked up by the hive in a sweep through all the cosmos. But they can’t be late for the pick up or that’s it – game over and they must stay on the planet and lose their immortality.

After 300 years of thinking about it and experiencing the collective memories and information observed by others, Leonard has decided he wants to be a Ranger in Yellowstone National Park. Leonard also likes to watch reruns of I Love Lucy and has a bucket list of other things he wants to accomplish during his stay. On his way to Earth traveling on a beam of light, Leonard learns the hard way not to let his attention wander as he practices his knock-knock jokes. Suddenly he’s got … a tail? Oh, dear.

Landing in a tree during a howling thunderstorm, Leonard discovers he’s reached Earth as a cat. Not only that but somehow his trajectory has put him on the South Carolina coast which is way far from where he must be in a month for his planetary hive-Uber pick up. Oh, dear. Luck is with him though as he is saved by a young girl named Olive who takes him home, names him Leonard, and wants to keep him. As Leonard gets to know Olive, he realizes he’s met a lovely person with an old soul, who isn’t comfortable around people but who loves animals and can spout all kinds of information about them. But can she help get him where he needs to go in time?

I won’t say any more about the details of the plot because I was alternately holding my breath and crying while reading the book. How was Leonard going to get his need across, what would happen to Olive when her summer with her grandmother Norma was over, would Olive have to move to California to live with her mother and the mother’s new boyfriend, is Norma the tough old bird she first appears to be when Leonard meets her, and would Leonard ever get the hang of proper cat grooming?

This book is all about the feels. And I don’t use that turn of phrase lightly as it usually makes me cringe but here it fits. Watching Leonard marvel at things on Earth is delightful as well as funny. He wonders why humans would sleep so much when they have such fabulous things like fingers and toasters, movie theaters with plush velvet seats, and dinner forks. He’s a bit taken aback while watching “alien” movies and at first not sure of Stanley the dog but he loves visiting the local aquarium and communicating with the wildlife there. He even makes sure that one of Olive’s wishes comes true.

The way he decides how to communicate with Olive – yes, they do – is ingenious if tiring and yes the novel has him knowing how to communicate in English – just go with it. He might be worrying about how he’s going to get to Yellowstone in time and initially sad that he doesn’t get to be a Park Ranger and tell his knock-knock jokes but Leonard also takes time to appreciate what he’s got: a trip to the beach, a yellow raincoat (I just know he looks adorable in it), a self cleaning litter box, cheese sandwiches, board games, and a sweet girl who cares about him. Olive is determined to get Leonard “home” even if she knows she’ll miss him.

Here is what I’ve learned about the art of sandwich making. It is about more than shoving slices of cheese onto bread. It’s about the sights and the sounds of the kitchen: the refrigerator humming, the curtains swishing with wind. It’s about who you make the sandwich *with*—and the thought of enjoying it together.

And Olive whispered that she had a surprise for me, if I wasn’t too exhausted. She dug out her suitcase. Underneath a stack of books—the Whitman and the Wordsworth—there was a small green tent. “I bought it at a used camping store online, so I’m not expecting great things, but it should fit us both.”

I like to think that my tail said it all—that Olive knew exactly how much this meant. It really was extraordinary, setting up camp in a lush bed of grass, not too far from a silver-topped lake. Inside the green fabric, I was a *ranger*. I was camping in the wilderness, the earth at my feet.

All that time, all that study.

As the month winds down and time grows short, I inhaled the last 100 pages of the story. How was it going to end? Would Leonard make it? Half of me wanted him to and half of me kept saying, “but … but … Olive … and Leonard loves her and she loves him but if he misses his pick-up he’ll be stuck and eventually die … but how can he leave …” Well, I was satisfied with the result. And despite all the gimmes, I still love the story enough to give it an A- for the feels and the tears and the smiles. It’s charming, it’s humorous, it’s winsome, and heartwarming.

Spoiler (Spoiler for ending, don't read if you don't want to know how things end.): Show

“Maybe *I’m* weird, but that’s okay.
You taught me that.”
Then she touches her dry nose to mine.

I have been thinking lately about the idea of soul mates—identifying
your soul in another. How we may not be made of the same
materials, of fur and air, but we can recognize each other across a
crowded room. When we catch each other’s glance, our souls will
say, *Yes, I know you, and Yes, this feels like home.* I understand
what it feels like now, to know a place. To give yourself up to gravity.

To rescue someone—just as much as they rescue you.