I’m sure you are familiar with Choderlos de Laclos’ 18th century epistolary novel, Les Liaisons dangereuses. It has been adapted to stage and screen, and the cinematic versions include Dangerous Liaisons, Valmont, and Cruel Intentions, among others. 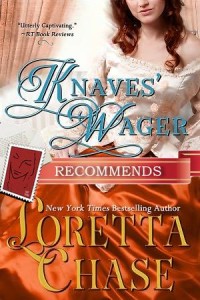 In Les Liaisons dangereuses, the corrupt Vicomte de Valmont wants to seduce the married Madame de Tourvel, widely known for her incorruptible virtue. Valmont is interested in Madame de Tourvel not only because she presents a challenge, but also because he has a wager riding on it. The beautiful Marquise de Merteuil has promised to spend a night with him if he succeeds.

For some reason, I’ve long enjoyed romances whose plots bear a similarity to Les Liaisons dangereuses, as your book Knaves’ Wager does. First published in 1990 as a traditional regency in the Avon line, Knaves’ Wager has been recommended to me by several people, including DA’s Sunita. I’ve been eager to read it for a while, but all the more so recently, thanks to a Twitter conversation. Imagine my surprise and delight when, a few days after that discussion, Knaves’ Wager was released as an ebook.

Knaves’ Wager begins with Lilith Davenant, a 28 year old widow, traveling to London with her niece, Cecily Glenwood. Lilith is described this way:

Lilith Davenant was tall, slim, and strong. Her classical features—a decided jaw, a straight, imperious nose, and high, prominent cheekbones—had been carved firmly and clearly upon cool alabaster. Her eyes were an uncompromising slate blue, their gaze direct, assured, and often, chilly.

Lilith seems as cold as a slab of marble, but she has one soft spot: her nieces. Like her elder and younger sisters, Cecily has thoughtless, unreliable parents, and thus depends on Lilith’s personal and financial assistance to enter the marriage mart.

Unfortunately, Lilith’s once-considerable fortune has dwindled. What her late and feckless husband didn’t gamble away her former man of business invested badly. To add insult to injury, Lilith has recently discovered an old debt of her late husband’s owed to the Marquess of Brandon, a man who gambled and caroused with Lilith’s husband, driving him to his death in the process.

The idea of being indebted to Brandon is loathsome to Lilith, but if she pays back the money her husband owed him, she will not have enough funds left to bring out her four young nieces unless she does the unthinkable and marries again.

Lilith loved her late husband, but he was faithless and debauched throughout their marriage, and ignored her except for brief and unpleasant nighttime visits. Now Lilith dreads physical intimacy and has no desire to ever marry. But marry she must, if she is to pay off her debt to the Marquess of Brandon and finance her nieces’ come-outs.

This conflict comes to a head when Lilith and Cecily encounter a curricle by the side of the road. The curricle’s owner lies beneath it, injured. Lilith has him transported to the nearest inn where she sends for a doctor. The injured man, Mr. Wyndhurst, is arrogant, insolent, and possibly depraved. He is described in Lilith’s POV as “the very model of a bored, dissolute scoundrel.”

Lilith and Wyndhurst exchange some words as she feeds him broth, enough for him to attempt seduction and meet with a cold rebuff. The next morning, Lilith learns that Wyndhurst’s relations came and got him, and he has paid his bill, leaving a cheeky message for her with the innkeeper, one that causes Lilith to smart – but not as much as does the innkeeper’s new information: Mr. Wyndhurst is Julian, Marquess of Brandon, the same man whom Lilith blames for the death of her husband.

Unable to bear the thought of remaining in Julian’s debt, Lilith orders her man of business to pay back the money she owes and accepts an offer of marriage which she had been weighing. Her new fiancé is Sir Thomas Bexley, a widowed, short and balding baronet with diplomatic ambitions.

Sir Thomas no more loves Lilith than she loves him, but he admires her unimpeachable character and believes that marrying her can only serve his political aspirations well. For her part, Lilith plans to be a good fiancée and wife to Sir Thomas. She is grateful that his considerable wealth will allow her to continue bringing out her nieces.

Meanwhile, Julian, Marquess of Brandon, is exhorted by his relatives to travel to London and liberate his cousin Lord Robert from an unfortunate betrothal to a French courtesan, Elise. Julian could care less what happens to Robert, but Derbyshire is boring, and London offers the presence of one Lilith Davenant. Julian wants to amuse himself by seducing Lilith because of an attraction he sensed when he met her, and because he knows she will resist him with all her strength.

In London Julian discovers that Elise is almost as wily as himself. His cousin Robert has written love letters to the French courtesan and she will not easily release them. She plans to use them to sue for breach of promise should Robert back out of his proposal.

Julian threatens to have Elise’s house broken into if she does not hand them over, but Elise, who senses Julian’s desire for Lilith, offers him an alternative: seduce Lilith within eight weeks, and Elise will hand over the letters freely. Fail, and the compromising letters are Elise’s to do with as she sees fit.

A challenge is irresistible to Julian, and a challenge accompanied by a wager is even more piquant. While his cousin Robert slowly falls for Cecily, Julian employs will, charm, and underhanded scheming in a campaign to seduce Lilith. But Lilith has considerable will, charm, and brains of her own. Will Julian’s win his knaves’ wager? Or will it cost him his heart?

I won’t call Knaves’ Wager a redemption story because that’s not exactly what it is. It’s more of a story of two people opening up to one another despite very different aims, discovering the truth of their hearts and minds, and growing in the process.

The electronic version, which I read, has a handful of OCR errors, so on occasion a word can puzzle or amuse. For example a minor character named Hobhouse has his name spelled “Hothouse” at least once.

Readers should also be aware that this book is written in a very different style from your current novels. It’s less humorous, more serious, and wordier as well. Dialogue can be longer and the pacing of the novel is slow and deliberate compared to the pacing of today’s books. Although on occasion I did wish more would happen a touch faster, for the most part I was deeply absorbed.

Julian begins the book with the goal to seduce Lilith, nothing less and nothing more. His initial reasons, at least those he acknowledges to himself, are somewhere between mischievous and villainous. He’s charming enough that it’s hard to dislike him, but it’s also hard to trust him for quite a while. He wants to prove he can bed Lilith, but beneath that, he’s also drawn to her strength, and because he has to work to breach her defenses, she breaches his own in the process.

There’s a lovely journey of self-discovery for Julian as that happens. He is so unused to being in love that he mistakes his emotions until it’s almost too late.

Lilith was an absolutely wonderful character. I have a love for protagonists with a “still waters run deep” quality, and Lilith is such a one. Beneath the cool exterior she presents to the world lies a vulnerable woman who both needs and deserves love, and just as Julian has to mature enough to realize he is capable of loving, Lilith must eventually arrive at the realization that marrying Sir Thomas would be a mistake.

In the interim, her attraction to Julian tortures her; not only does she have no illusions about his intentions toward her, she also feels guilty for betraying Sir Thomas, if only in her heart.

It would be remiss of me not to mention that there are no sex scenes, but although I wanted one, just to see how it would have gone, I never felt the book lacked sexual tension. That was something it had in spades, due to the terrific chemistry between the main characters.

Lilith also read older than her 28 years to me, but again, this didn’t lessen my enjoyment much. There was a level of maturity to the story that is rare and that I greatly welcome.

Knave’s Wager satisfied me to a degree few books do these days. It is easy to see why so many readers love it and why some consider it a genre classic. I am giving it an A- grade.

→ Janine
Previous article: REVIEW: Emily (aka Waiting at the Church) by Paula Allardyce
Next Post: Thursday News: Cloud based emails have no protection; 50 Shades sends out C&D in France; Nook $59 at BN