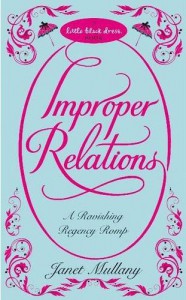 Improper Relations is told in the first person, alternately by the hero and heroine (an aspect of the story I loved). Charlotte Hayden is attending the wedding of her distant cousin (and best friend) Ann Welling to the Earl of Beresford. Charlotte’s voice is sardonic and perhaps a hint bitter; she is distressed to be losing Ann and honestly a bit jealous. She accepts a handkerchief to dry her tears from a handsome gentleman who turns out to be Viscount Shadderly (thereafter referred to as “Shad”), who is himself cousin and friend to the groom. Shad flirts with Charlotte in a rather offhand manner, as befitting his rake status, before announcing that he’s to be wed – to who, he doesn’t know, but his family has decided it’s time he marry. This puts him on level ground with Charlotte, whose family is eager to marry her off.

Their first meeting is unremarkable, as hero-heroine first meetings go, and I liked that about it. Charlotte is attracted to Shad, because he’s handsome. Shad doesn’t seem to be that impressed by Charlotte, but he’s interested enough to pay a call upon her several days later. Charlotte, who could be generally said to be lacking in the social graces department, is less than welcoming, and Shad finds himself intrigued by her “astringent’ personality.

Later that night, at a soiree, Charlotte gets rather drunk (something she does rather shockingly often for a romance heroine), and she and Shad are caught in a compromising position in the garden. Just like that, the two are betrothed.

Shad is more or less okay with the forced betrothal, even if Charlotte’s family is shockingly vulgar and he believes her to be infatuated with his cousin Beresford. Charlotte is less happy at the prospect of being a “brood mare” for a husband whose future fidelity she doubts (as well she should; he pretty much tells her that after she produces an heir they can each go their own way, discreetly, of course).

The plot of Improper Relations is nothing new – the dowdy heroine, the handsome, wicked hero, and the forced marriage have been historical romance novel staples for as long as I can remember. The prose is where this book really shines. I bookmarked numerous pages as I read, passages that featured sparkling, funny dialogue and observations from the characters.

Charlotte’s mother frequently speaks in italics and capitals that emphasize her penchant for melodrama:

“Charlotte, you may leave to reflect upon your Most Miserable Lack of Filial Affection.”

Then there is the mortifying conversation that Shad has to conduct with Beresford, who is finding Ann less than eager to perform her marital duties:

I consider my next words carefully. ‘ Possibly you should consider her pleasure.’

Keeping a careful eye on the walking stick, I ask a few discreet questions and discover that Beresford is blissfully ignorant of the female anatomy. I take it upon myself to share what I know. He is startled and upset by my revelation, in much the same way, I imagine, that our forebears discovered that the earth revolved around the sun.

‘Every woman?’ he says with great suspicion. I wonder if he conducts a mental inventory of all the females he has ever known. ‘Are you sure?’

‘And who told you this?’

‘A woman in Italy. She was my first mistress. She married a sausage-maker after we sailed.’

‘A sausage-maker!’ Beresford echoes. His universe is in chaos. ‘An Italian.’

He turns to me in triumph. ‘Well, of course, that explains it. She was a foreigner. So it can’t possibly be something Englishwomen have.’

He looks troubled and pokes at the ground with his walking stick. ‘Even – even my mother?’

Mostly I love the interplay between Shad and Charlotte themselves:

“Is she your mistress?”

“That’s a very indiscreet question to ask on our wedding day.”

Shad and Charlotte’s early marriage has its moments of success – they are compatible in bed – but is marred by some problems as well. There is a discarded mistress of Beresford’s that Charlotte suspects belongs to Shad, and Shad has two wards who are commonly assumed to be his by-blows. Charlotte actually takes both of these situations with a fair amount of equanimity, to her credit. Shad has more of a problem controlling his jealousy, the vast majority of which is quite irrational and baseless. This got to be a bit of an issue for me, actually – Shad’s continual suspicion, even after being proven wrong numerous times, began to make him seem like a jerk who was also possibly a bit dim. Charlotte doesn’t help, by keeping secrets from Shad, but in her defense they are not her secrets, and she has good reason for not being forthright with him.

In addition to their own self-sabotaging, Shad and Charlotte’s marriage is threatened by the discord between Ann and Beresford. Ann turns out to be rather interesting, a more fully-realized type of secondary character than typically found in romance novels. There are early signals from Charlotte’s perspective that however much Charlotte adores her, Ann is kind of self-absorbed and possibly not the best friend she could be. But she never turns into a full-fledged villain; on the contrary, she manages to be fairly sympathetic even when she’s being selfish and immature. I kind of liked her. (Beresford, on the other hand, is pretty much just a boor, though his friendship with Shad seems to be sincere enough, at least.)

I liked Charlotte a lot; she’s not always wise but her actions follow a certain internal logic. Plus, I like a girl who enjoys her alcohol. I liked Shad, too, in spite of his jealousy issues; he turns out to be a bit of a nurturer and a collector of oddball souls.

I really enjoyed Improper Relations and am looking forward to trying your other humorous regencies, The Rules of Gentility and A Most Lamentable Comedy. My grade for this one is an A-.