REVIEW: I Kissed an Earl by Julie Anne Long 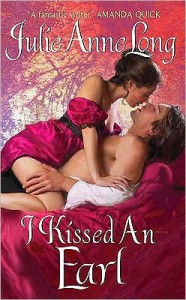 Violet Redmond is young, beautiful, and bored. It seems that no matter what she does, her popularity with the ton will not fade. Suitors flock to her side, even though she once threatened to cast herself into a well when arguing with one of them.

In the next to last book in this series (the Pennyroyal Green series), Like No Other Lover, Violet, the spoiled daughter of the Redmond family, visited a gypsy fortune-teller who told her that she'd be taking a journey across the water. The gypsy also spoke the word "Lavay." So when Violet hears Lord Lavay's name mentioned at a ball one night, and learns that he sails on a ship called The Fortuna, she finagles an introduction to the man and to his captain, Asher Flint.

Flint, on whom the title Earl of Ardmay has just been bestowed, is illegitimate and part Native American. He is described in the book's opening line as looking "like a bored lion lounging among a flock of geese," and as the story begins, he has just been charged by the king with capturing Le Chat, a notorious pirate preying on English ships. The title of Earl of Ardmay has ostensibly been awarded Flint for a heroic deed, but in actuality it is a way for the King to apply pressure. If Flint succeeds in apprehending Le Chat, he will be given lands to go with the title. If he fails, well, unspoken threats hang in the air.

Flint resisted accepting the earldom, but then Le Chat attacked The Steadfast, a ship belonging to Captain Moreheart, who had been a father figure and mentor to the fatherless Flint when he was a child. Moreheart did not survive the sinking of his ship. Now Flint is out for revenge, and he intends to capture Le Chat either dead or alive long enough to be hanged.

While dancing with Violet, Flint realizes that she reminds him of himself. Both of them are filled with ennui and would much rather be somewhere other than the ballroom. Flint challenges Violet on several levels, but then he spots her brother Jonathan and freezes. It seems Jonathan is a dead ringer for Mr. Hardesty, a sea merchant Flint knows.

Violet doesn't think much of this until she dances with Lavay and tells him that his captain mistook her brother for Mr. Hardesty. She learns from Lavay that Hardesty is well-mannered, educated, and has sailed all over the Mediterranean, but Lavay and Flint believe him to be the pirate Le Chat.

Lavay also mentions that Hardesty's ship is called The Olivia, and it is at that point that Violet is stunned to realize that Le Chat may be her missing brother, Lyon, who once loved Olivia Eversea. Not only is Hardesty's ship named after the woman Lyon loved, not only does Mr. Hardesty resemble Violet's other brother Jonathan, but "Le Chat" means "the cat" in French, and that fits with the name Lyon.

Ever since Lyon disappeared from Pennyroyal Green following Olivia Eversea's rejection of him, there's been a hole in the Redmond family-‘and in Violet's heart. Violet tries to convince Jonathan to follow the clues she has gleaned from Flint and Lavay, but Jonathan laughs at the idea that their brother may be a pirate. Undaunted, Violet stows away on Captain Flint's ship, The Fortuna.

When Flint discovers Violet's presence aboard his vessel, he's both furious and admiring. Having a woman on board ship is a very bad idea – yet he can't help but recognize Violet's resourcefulness. Still, he intends to leave her at the nearest port, until he realizes that she may be right about her brother Lyon being Le Chat.

As Violet and Flint gradually fall in love, almost against their wills and certainly against their better judgments, they come to respect one another more and more. But rending their hearts is the knowledge that they are at cross-purposes: Flint wants to apprehend Lyon, possibly even to kill him, and Violet wants to save her brother's life-

I Kissed an Earl is not without flaws. The first couple of chapters were slow to engage me, since Violet came across as spoiled and rude in the very beginning of the story. She even repeated others' use of the word "savage" in reference to the part Native American Flint, which really turned me off.

Also, later in the book, when Violet was aboard Flint’s ship, the sailors on his crew seemed a bit too gentlemanly in regard to her presence there. It's not that I want to see Violet mauled, but rather that it stretches my credulity to believe that no one would ever try to cop a feel, especially when Flint had warned Violet that her presence on the ship would be too great a temptation to his men, and when no explanation was given for their subsequent self-control.

I also caught a few historical inaccuracies, from small ones such as the use of the word "tectonic" in its geological sense, to larger ones like Flint's intention to live in America although he has been given an English title.

But although I Kissed an Earl is not without flaws, there's no question that it is one of my favorite books of the year thus far. That is at least partly because the conflict between Flint and Violet – he wants to kill her beloved brother; she wants to save her brother from the man she loves – is on a scale not often seen in today's romances, and that depth of conflict gives the book heartrending poignancy at times.

The characters, too, are as memorable as their relationship. Although Violet starts out spoiled and bored with life, her saving grace is her fierce love for her brother Lyon. As she journeys on the high seas in her quest to find him, Violet is forced to grow into a more mature and capable woman. Her horizons broaden, her determination grows, and her love for The Fortuna's captain deepens. Where once she casually repeated the word "savage," in reference to Flint, she now steps in to defend him from slurs and insults, as well as worse. Her bravery and her capacity for love show through as she leaves the girl she once was behind.

As for Flint, he too loses his bored, detached veneer. Beneath this exterior is a man who has acquired everything he has through struggle, and who has risked his life for his fellow sailors over and over. While every risk he has taken has paid off advantageously for him – something that is no coincidence — he is also a man who has retained his humanity even through great adversity.

Not ever having had a family, Flint is thrown by the feelings Violet evokes in him. His plan is to found a dynasty with his Moroccan mistress, who is as much an outcast as he is, but through witnessing Violet's devotion to her brother, he comes to understand what family and love truly mean.

The emotions in this book are so palpable that at times, I felt as though I was literally present in Flint's cabin with these two people, intruding on something intimate and precious. A lot of that is due to the beauty of the writing. Here is an excerpt from one of my favorite scenes:

The kissed raced like a lightning strike along his spine and seized his lungs with a simultaneous rush of panic and joy. As though he'd willingly flung himself backward from the mast to the deck and not only enjoyed the flight but survived the fall unscathed.

He inhaled sharply and tipped back into the space shaped like him and folded his hands beneath his head, hoping to appear insouciant but in reality trapping them. He was suddenly afraid of what they might do: Plunder. Caress. Explore. Dear God, take, take, take.

He held his body motionless. His heart took painful jabs at his breastbone. His blood was a thick, hot liqueur. His mind a useless scramble.

He could hear her breathing hard next to him. Was aware her fingers were at her lips. Touching them, as if to prove to herself she'd been kissed.

He listened to her breath, the ragged rhythm of it a counterpoint to the incessant sigh of the sea, but for some reason he didn't want to look at her. He closed his eyes instead and saw her hair, shadow-dark, pooled on the pillow, the shudder of her lashes against her cheeks; he conjured the shape and texture of her lips sinking, opening against his, her breath mingling with his.

That kind of gorgeous, evocative writing is the reason I Kissed an Earl is not just worth reading but also worth keeping, and my favorite of your Pennyroyal Green series. A- for this one.