REVIEW: I Just Play One on TV by A.L. Turner

I read your book back in August and loved it, but it’s taken me a while to get back to it for review. Reading it a second time, I still loved it and it surprised me anew with its complexity and how much I loved the characters. 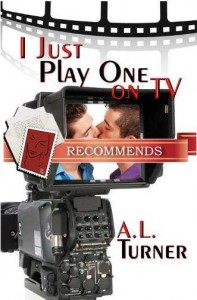 The story is told from Vince’s first person perspective. And he’s just wonderful. He’s in LA as an aspiring actor and interviews for two roles in one day: the “straight” man on a horrible sitcom, and a character in a high-concept sci-fi show with a multicultural ensemble cast. He auditions with Alex for the sci-fi show, things click on the stage and personally, but they’re both convinced they won’t get the roles. They have an out-of-character-for-both-of-them one night stand after the audition and are shocked weeks later when they find themselves working together. The problem is that Alex is deeply in the closet professionally and personally and Vince isn’t. And Vince doesn’t do one night stands (much). So despite their mutual attraction and Vince’s huge crush on Alex, they don’t get together and don’t get together. And don’t get together. And they channel all their tension and frustration into their characters who are really close “friends” that Vince and Alex play with a strong gay subtext. These characters don’t get together and don’t get together as well.

Once they’re together, the tension comes from their differences about being in or out of the closet. Vince goes back into the closet for Alex — much to the very vocal disgust of his friends and family — but it’s a constant tension in their actual relationship, as we see when Vince invites Alex to go home to Chicago with him for Christmas. Alex agrees, then freaks out in the airport when they’re recognized by another actor. He eventually makes it to Chicago and Vince forgives him, but the tension is real and Vince just doesn’t GET why Alex insists on the closet so strongly, while at the same time Vince wants to push the gay subtext in the show to text because he believes its Important.

One of the joys of this book for me, especially reading it the second time, was really seeing how Vince came to understand Alex’s viewpoint on the closet. Alex has a horrific coming out story that just gets more and more damaging every time he tries to come out. Whenever he tries, it’s been awful for him, and as Vince stays with him (and the story takes place over more than a year), Vince comes to understand and even agree with Alex’s perspective, against his own political and personal beliefs. Readers shouldn’t worry, though, because Alex comes to understand Vince’s perspective as well and they get their HEA when Alex blows the doors off his closet in about as public a way as possible.

The closet issue also means, maybe counter-intuitively, that this book is incredibly complex emotionally. The heroes get together, break up, get back together, break up, and then finally get back together again, completely remade. And this isn’t the “I love you, I hate you, I love you” of bodice rippers and Harlequin Presents. This is deep commitment to the relationship that’s torn apart by two personalities that need very different things, who are then unable to stay apart because they need each other more, who are then torn apart again by different choices and issues, who finally find their way back to each other in ways that will sustain the relationship.

We cleaned up the mess we’d made of the apartment and then showered — together — kissing and touching and cleaning each other. Once we were out, he tied his towel around his waist and went back out into the living area, turning on the stereo system low and turning out most of the lights. I stood in the living room, naked, and watched him, wondering if he wanted me to leave.

When he saw me, he went still, becoming nothing but a shadow in the dimness of the night lights and streetlights and the blue glow of the stereo control screen. He finally moved — to set down the remote — and walked towards me. I didn’t let myself back away or hide myself. If he wanted to regret this, if he wanted to be horrified by it, that was his problem, not mine. Better I know now than have to wonder.

He stopped just inches away, his eyes on mine, his expression motionless.

I didn’t say anything.

Then he unknotted his towel and let it drop to the floor, and he slid his hands up my arms to my shoulders, slowly curling around as he went, savoring the caress. My whole body shuddered and he whispered, “Stay tonight?”

“Definitely,” I said. Forever, I thought.

He pushed his fingers deep into my hair and touched his forehead to mine, softly and more intimately than a kiss. I could feel his breath on my face as he said, “Good. That’s good.”

He led the way up to his loft bedroom. Up here, the bedside lamp was on. The covers were folded back, showing inviting white sheets. Alex had speakers up here, so the low-key music purred in the background. Candles, unlit, stood on the nightstand.

He stopped by the nightstand and turned, watching me take in the room, his expression tight and unhappy. “It’s too much, right?”

“No,” I said. “No, it’s…” Ridiculously, amazingly, shockingly romantic. For once, though, I was literally lost for words. Even as I screamed for joy inside, my heart broke at how afraid he was, and how uncertain. What he must have been thinking about, worrying about.

He was picking up the candles as if to stash them away when I reached him and caught his hands, pushing them down until the candles were back where they’d started and he’d let go of them. Now I had his attention again.

He did, and I felt him relax. I kissed him, first with just my lips, lightly and quickly across the seam of his mouth, then deeper, exploring him, taking my time, not letting him pull away or hasten things. I kept kissing him until I could feel him understanding it and relaxing into it, savoring the languid sensuality.

For possibly the first time in my life, I realized that the best thing to say may be nothing at all.

I lit the candles and turned off the lamp before I joined him in his bed.

My one quibble is that after watching these men through so much, the ending was very abrupt. I wanted to see them enjoy being back together, even for just a little epilogue. The final image is beautiful, sure, but there’s been so much angst and heartache and time apart, so much finality to their split, and so much careful dealing throughout the rest of the book with fallout of decisions, that I wished for a glimpse of them beyond that night just to make sure they were doing okay.

As I said back in August, I couldn’t figure out if this was fanfic with the serial numbers filed off — I *never* watch TV, so I’m really bad about figuring this stuff out. You assured us it wasn’t. And honestly, I really think it’s TOO self-conscious about the slash angle to be fanfic. Vince follows the slashfic about their characters online. The characters go to conventions and meet fans who show them explicit slashpics. Vince convinces the show’s creator to make the subtext between James and Matt overt, which precipitates changes on the show because of how it affects Alex in real life. Even if it is fanfic without serial numbers, its very self-consciousness makes it fascinating to me. And the writing is amazing enough that the story was real to me, no matter its origins.

I really loved this book both times I read it and I honestly can’t recommend it enough.

P.S. God, I hate hate hate the cover for this book. Yuck. Title’s not great, either.